BERKELEY, Calif. - A team of scientists at UC Berkeley announced on Thursday they have launched a pop-up lab to monitor the region’s wastewater and sewage pipes for coronavirus so that they can detect virus hotspots and figure out what to do next if an outbreak erupts.

Scientists have discovered that people infected with COVID-19 often shed the virus in their feces, which then ends up in toilet, sink and shower water, as well as in everything else that flows down the drain.

Knowing what neighborhoods are rampant with coronavirus can help health officials figure out how to clamp down on the spread and if their efforts are even working, said Kara Nelson, professor of civil and environmental engineering at UC Berkeley, who leads the team.

Knowing where the virus is concentrated also has the potential to provide an early warning for a potential outbreak, as evidence suggests that the virus can appear in feces, even before someone starts to experience symptoms, scientists said.

Extracting feces from sewers enables scientists to collect samples en masse, as opposed to knocking on everyone's door and asking, Can I have a sample of your poop?

“Wastewater naturally pools the waste from hundreds to even millions of people in a single sample, " Nelson said. "So if you can collect a representative sample of wastewater and analyze it, you can gain a tremendous amount of information that you likely couldn’t gain through testing people individually.” 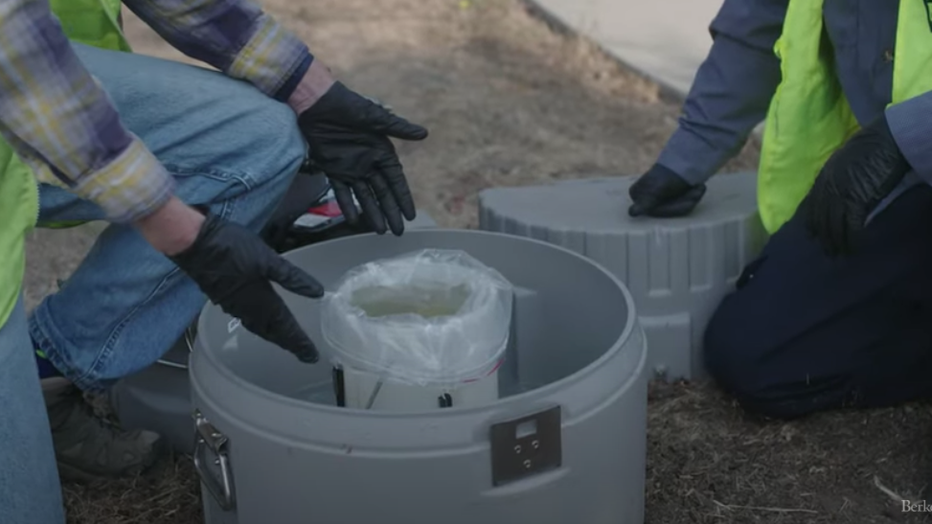 A Cal team looks at sewage to detect if there is coronavirus in it. Photo: UC Berkeley

The Cal scientists are currently working with 10 wastewater agencies across Alameda, San Francisco and Marin counties, and they will be starting soon in Contra Costa County.

In terms of results, Nelson said now that infections have come way down over the last few months, the wastewater data provides "reassurance that prevalence is indeed low."

She said moving forward, the team hopes the wastewater data will be useful for getting an early warning if infections start to increase again, and for confirming the effectiveness of responses to outbreaks.

The Cal team is now working with cities at various "sewer sheds," which is where a bunch of sewers flow to a single pipe or station where samples can be collected. The sewer sheds currently being monitored represent the waste of a few thousand to several hundred thousand people.

Through its COVID-WEB project, scientists said the lab can process about 30 samples a week for 11 agencies, and the team plans to scale up to as many as 200 samples a week by the end of the year to meet the growing demand.

Nelson said the temporary, 1,200-square-foot lab located in what was once empty research space in Hildebrand Hall is the first "high-throughput lab in the Bay Area," which has the capacity to bring in a large number of samples and provide results quickly to public health departments.

Back at the lab, researchers extract DNA from the feces to determine if the SARS-CoV-2 virus is present.

It's not an easy task.

Nelson said wastewater contains chemicals, such as bleach, that can break down the SARS-CoV-2 virus as it travels through the sewer system as well as other viruses that each have their own RNA molecules.

For these reasons, the Cal team is working with UC Berkeley’s Department of Molecular and Cell Biology, which created a new technique that uses table salt to slice open the outer casing of the virus causing it to spill all of its RNA into the sample. The salt stabilizes the RNA, which is then concentrated in the lab, the scientists explained.

Graduate student Adrian Hinkle said the whole testing technique now takes about eight hours to complete, and the pop-up lab turns around the results for any given sample to public health officials within three days or less. They have taken extra steps to further streamline the process, like including salt in the sampling kits that they send to utilities so some of the work can start before a wastewater sample even reaches the lab.

The COVID-WEB team has partnered with a number of Bay Area utilities, including the San Francisco Public Utilities Commission to form a regional working group that helps coordinate when, where and how to gather wastewater samples for COVID-19 testing.

The Cal scientists are now hoping to share their data and methods.

“One of our project goals is to help other regions replicate what we're doing,” Nelson said. “We want to share information as soon as we possibly can so that we can speed up the process for other regions that are trying to create something similar.”