After Russian forces pressed on with a full-scale invasion of Ukraine, many Americans are wondering how they can help the Ukrainian people in their time of suffering.

Charity Navigator has put together a list of some of the top-rated nonprofits that are aiding in relief and recovery efforts in Ukraine.

These charities have earned high ratings for their financial efficiency and for clarity and transparency about their operations.

The following nonprofits are "engaged in relief and recovery efforts in Ukraine and the surrounding region," according to Charity Navigator.

While any decision to give should be carefully considered, the groups below earned three or more stars from Charity Navigator. 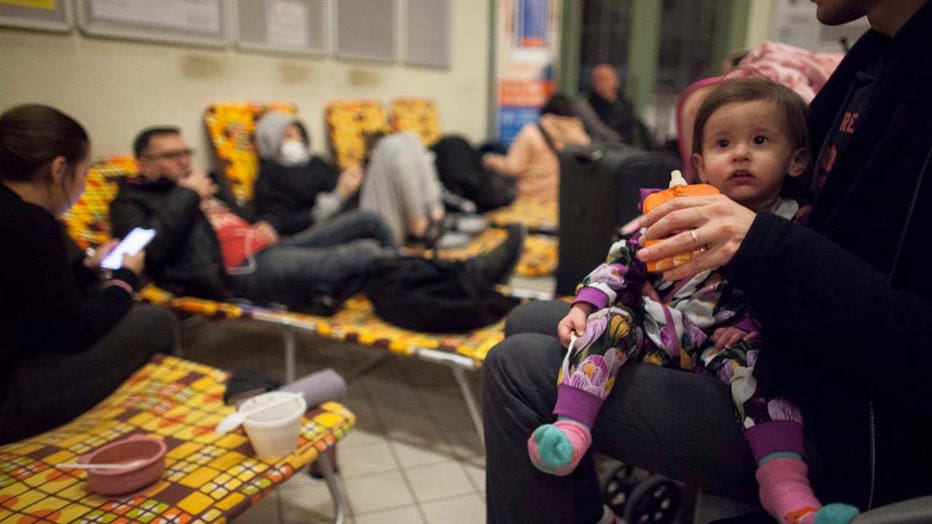 Ukrainian refugees and a child seen at a train station in Przemysl, Poland on Feb. 24, 2022. (Maciej Luczniewski/NurPhoto via Getty Images)

The Red Cross is working around the clock to provide critical aid, medical and mental health support to those fleeing and seeking safety in neighboring countries.

FOX Corporation has already donated $1 million to the American Red Cross to support their mission to provide aid and resources including water, medical supplies, housing support and more to the most vulnerable — both within Ukraine and for those who have been forced to leave their homes. FOX is also matching employees’ donations up to $1,000 per person.

You can join FOX in supporting the Red Cross’ relief efforts by making a donation at redcross.org/foxforward.

The organization reports that "children in Eastern Ukraine have grown up in conflict for the past eight years, enduring violence, shelling and displacement. Without urgent de-escalation, the crisis will spiral out of control, with devastating consequences for families."

The organization, begun in 1919, says that 85% of every dollar donated "goes straight to its mission."

It is an accredited charity by the Better Business Bureau.

In an "emergency note" posted on its website, the organization says it is "gravely concerned for children in Ukraine, Afghanistan and around the world who might be caught in the middle of armed conflict, forced to flee their homes and exposed to injury, hunger and sub-zero temperatures."

Single and monthly donations are accepted.

Russia's invasion of Ukraine has continued to intensify, with new explosions being heard in the capital of Kyiv in the last few moments. Officials fear the city could fall within days as the casualty count continues to rise.

The group notes that Russia's assault on Ukraine "will force hundreds of thousands [of people] to flee their homes. Access to basic needs, health care and more are now in jeopardy."

It notes that "emergency teams from this group in Europe are sending medical supplies and standing by to provide health screening and care for refugees."

"Ukrainians near the conflict zones are lining up to access cash and fuel."

It is a Better Business Bureau-accredited charity; it reports that 87% of its resources support its programs.

The organization says is "actively shipping essential medicines and medical supplies to affected areas in Ukraine."

The group's main goal, it says, "is selfless charity work in the public interest or [for] certain categories of citizens."

It is the first and largest global crowdfunding community connecting vetted nonprofits, donors and companies, it says, in countries around the globe.

It has delivered funds to community-led organizations that are "best-suited to provide relief and long-term recovery."

All donations support humanitarian assistance in impacted communities in Ukraine and surrounding regions where Ukrainian refugees have fled — "including food, shelter, clean water, access to education, health and psychosocial support," the organization says.

Well known for its humanitarian efforts across the globe, UNICEF is asking for donations to help provide necessities to children and families in eastern Ukraine.

Some of the key emergency responses UNICEF is embarking on in Ukraine include:

Matthew 25: Ministries "is an international humanitarian aid and disaster relief organization helping the poorest of the poor and disaster victims locally, regionally, nationally and internationally regardless of race, creed or political persuasion," according to its website.

The organization is accepting both monetary and product donations to send to the people of Ukraine.

The global nonprofit has been delivering primary health care and mental health services in eastern Ukraine since 2014, according to its website.

The organization is raising funds to expand the services they’ve been providing for people impacted by the latest conflict.

FOX News contributed to this report. This story was reported out of Los Angeles.