CAMBRIDGE, Mass. - The Biden administration has purchased an additional 200 million doses of Moderna’s COVID-19 vaccine, the company announced Wednesday — an extra supply that could potentially be used for children or as a booster shot if needed.

The company said 217 million doses have already been delivered. Nearly 130 million of those doses have been administered in the U.S. to date, according to the Centers for Disease Control and Prevention.

"We appreciate the collaboration with the U.S government for these additional doses of the Moderna COVID-19 vaccine, which could be used for primary vaccination, including of children, or possibly as a booster if that becomes necessary to continue to defeat the pandemic," Moderna CEO Stéphane Bancel said in the statement.

"We remain focused on being proactive as the virus evolves by leveraging the flexibility of our mRNA platform to stay ahead of emerging variants," Bancel added. 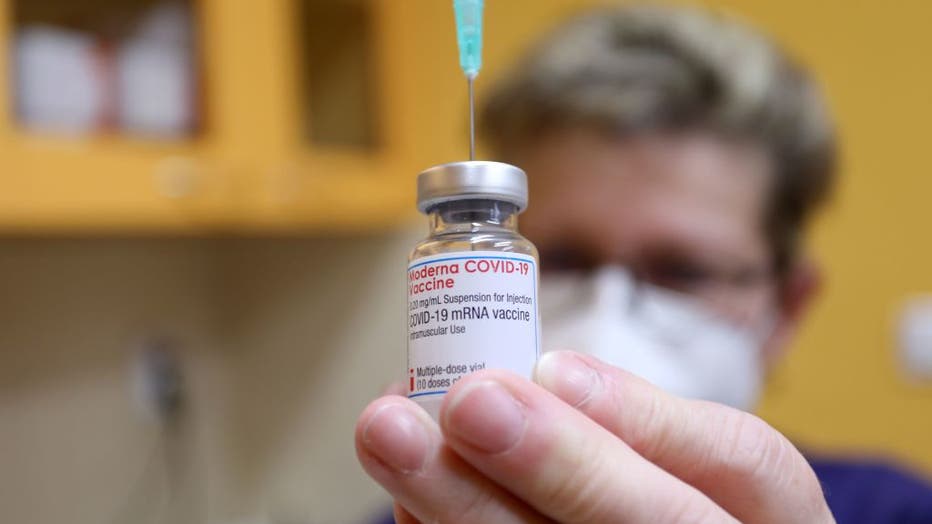 A doctor prepares a Moderna COVID-19 vaccine in a file image taken on Jan. 14, 2021. (Photo by RADEK MICA/AFP via Getty Images)

Moderna’s two-dose vaccine received an emergency use authorization from the U.S. Food and Drug Administration in December. Last week, the company announced that it asked the FDA to expand the approval to include children ages 12 to 17 based on data from its ongoing trial that found the shot to be both safe and effective in adolescents.

The company studied more than 3,700 12- to 17-year-olds. Preliminary findings showed the vaccine triggered the same signs of immune protection in kids as it does in adults, and the same kind of temporary side effects such as sore arms, headache and fatigue.

There were no COVID-19 diagnoses in those given two doses of the Moderna vaccine compared with four cases among kids given dummy shots. In a press release, the company also said the vaccine appeared 93% effective two weeks after the first dose.

The FDA approval process for Moderna’s expanded emergency approval could take several weeks. Pfizer-BioNTech, which was initially granted an emergency use authorization in December for those 16 and up, requested expanded use of its shot for those 12 to 15 on April 9. The FDA gave authorization on May 10.

Regardless, Moderna’s shot being cleared for the younger age group would dramatically increase the number of shots available to students ahead of the next school year.

The White House has launched a "national month of action" aimed at encouraging more Americans to get vaccinated ahead of the Fourth of July. President Joe Biden has set a goal for 70% of U.S. adults to have received at least one dose of a vaccine by the American holiday.

Currently, 64.7% of Americans age 18 and up have received at least one dose while 54.8% are fully vaccinated, the CDC reports.

Part of the administration’s push includes a slew of new steps to ease barriers and incentives to make the vaccines more appealing. Some of those efforts include partnering with rideshare services to offer free rides to vaccine sites, having pharmacies across the country that are open 24 hours a day and working with childcare facilities to offer free childcare as people get vaccinated and recover from their side effects.

The White House also teamed up with McDonald’s to encourage vaccination via a new design on McCafe cups. Anheuser-Busch announced a promotional giveaway earlier this month, saying it will "buy Americans 21+ a round of beer" once Biden’s 70% goal is met.

Facing a U.S. surplus, Biden has also promised the U.S. would donate 500 million doses to low-income countries around the world — where vaccines are far less plentiful. This donation is on top of 80 million doses of the country’s unused supply that has already pledged by the end of June.