Arizona Sen Martha McSally refused to answer a CNN reporter’s question about the impeachment trials in Washington and instead responded by calling him “a liberal hack” on January 16.

WASHINGTON - Republican U.S. Sen. Martha McSally of Arizona lashed out Thursday at a CNN reporter who asked her about the impeachment of President Donald Trump, calling him a “liberal hack.”

McSally refused to answer when CNN reporter Manu Raju asked whether the Senate should consider new evidence as part of its impeachment trial.

“You're a liberal hack. I'm not talking to you,” she said as she entered a room on Capitol Hill.

McSally doubled down a short time later, tweeting a cellphone video of the exchange apparently shot by one of her aides.

In a statement, CNN said, “It is extremely unbecoming for a U.S. senator to sink to this level and treat a member of the press this way for simply doing his job."

Her campaign quickly sought to raise money over the episode. She sent a fundraising pitch to her email list. A Twitter account run by Trump's re-election campaign shared video of the confrontation and urged supporters to donate to McSally.

McSally is facing a tough election to hold on to her seat, to which she was appointed following the death of longtime Republican Sen. John McCain. Gov. Doug Ducey appointed her after she lost a tight 2018 race to Democrat Kyrsten Sinema for Arizona's other Senate seat.

In November, McSally is likely to face Democrat Mark Kelly, a retired astronaut married to former Democratic U.S. Rep. Gabby Giffords, who survived an assassination attempt in 2011. Despite challenging an incumbent, Kelly reported a big fundraising advantage against McSally and ended 2019 with $6 million more in the bank than her.

Her campaign manager said last month that she “hasn't seen anything so far” to support removing Trump from office.

Democratic Senate leader Chuck Schumer has been pushing for the impeachment trial to include new witnesses and documents not available for the House proceedings. 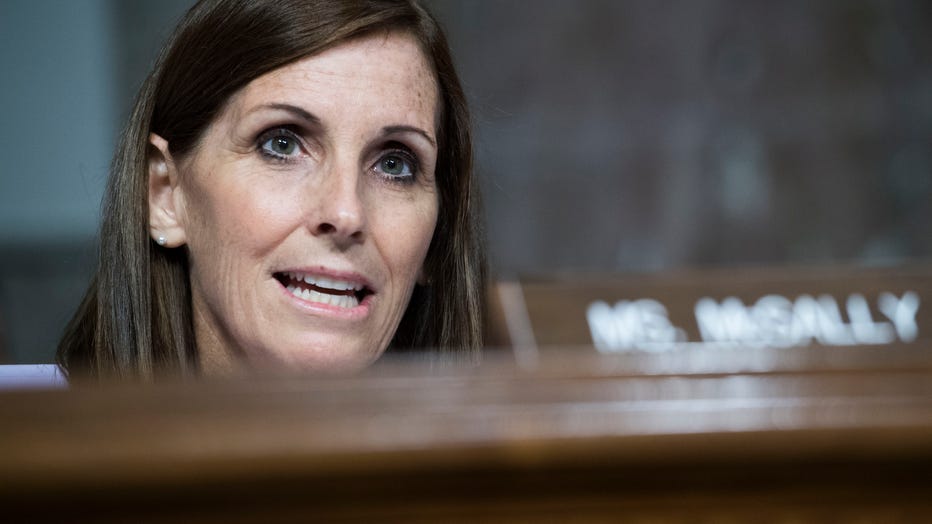 UNITED STATES - JULY 30: Sen. Martha McSally, R-Ariz., speaks in support of Air Force Gen. John E. Hyten, who has been accused of sexual assault, during his Senate Armed Services Committee confirmation hearing to be vice chairman of the Joint Chiefs