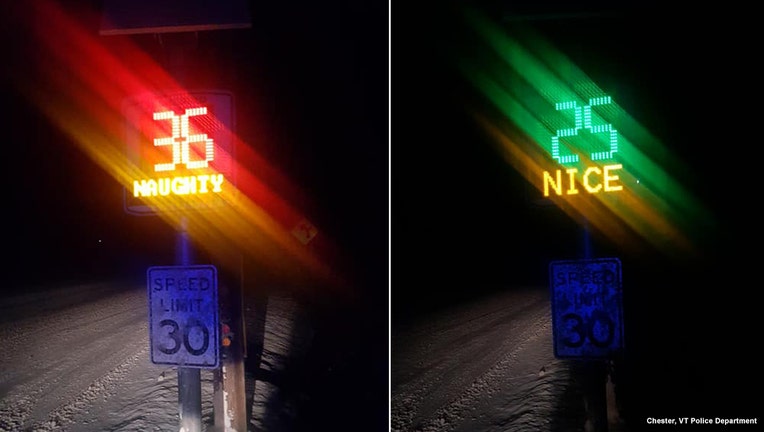 Police in the small Vermont town of Chester are helping drivers get into the holiday spirit and saving lives by getting drivers to slow down, according to a report.

The local police department posted on Facebook photos of illuminated signs on Route 103 -- in red if motorists are “NAUGHTY” for driving faster than the posted 30-mile-per-hour speed limit, or in green if they're “NICE” for traveling below that level, the Boston Globe reported.

“We received a request direct from the North Pole to remind everyone that Santa is still making his list and checking it twice, and to make sure to have a safe and happy holiday season!” police wrote on Facebook.

Detective Adam Woodell said five naughty-or-nice radar speed signs are being used in town, the newspaper reported. Woodell said the idea for the signs came from the town clerk, who noticed similar signs in the town of Manchester, Vt.

The signs have not gone unnoticed of drivers, the Globe reported.

Woodell said the signs have drawn positive feedback thus far, noting one man called the police department and said “he had the giggles that he’d been called naughty at his age,” he said.