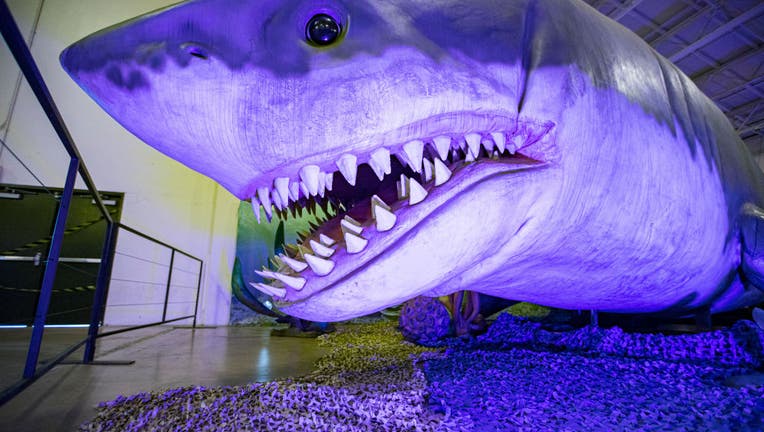 RIVERSIDE, Calif. - A new study has left scientists again wondering what the megalodon, the largest shark that ever lived, looked like after it was previously thought to have resembled the great white shark.

The scientific research from the University of California, Riverside and DePaul University was recently published in the journal Historical Biology on Feb. 6.

Scientists have also theorized the size and scope of megalodons based on their fossilized teeth and vertebrae.

But there’s hasn’t been enough fossil evidence to provide a complete picture of what the megalodon looked like.

A sneaky shark circled an alligator and nibbled on its foot while it was minding its own business near a dock in Hilton Head Island, South Carolina. (Credit: Cory Conlon via Storyful)

"The cartilage in shark bodies doesn’t preserve well, so there are currently no scientific means to support or refute previous studies on O. megalodon body forms," Phillip Sternes, a UCR organismal biologist and lead author on the study, said in a news release.

Sterns said he and his team studied and compared sharks in the lamniform order. They concluded that you can’t determine a shark’s size and shape based on if the animal is warm or cold-blooded.

"Warm bloodedness does not make you a differently shaped shark," Sternes continued. "I encourage others to explore ideas about its body shape, and to search for the ultimate treasure of a preserved Megalodon fossil. Meanwhile, this result clears up some confusion about previous findings and opens the door to other ideas once again."

Sterns said he hopes other scientists will continue to research and gain a better understanding of the megalodon.

"This study may appear to be a step backward in science," Kenshu Shimada, study co-author and DePaul University paleobiology professor, said. "But the continued mystery makes paleontology, the study of prehistoric life, a fascinating and exciting scientific field."

Megalodon appeared to be nearly 60 feet in length. They inhabited the Earth 3.6 million years ago and are often portrayed as super-sized monsters in films such as 2018’s "The Meg."

Scientists believe the Megalodon may have become extinct thanks to being outmaneuvered and outdone by its smaller, more agile cousin, the great white. Other theories suggest the megalodon was killed off by an exploding star approximately 2.6 million years ago. Another theory that has gotten a lot of attention in recent memory is that the megalodon simply was unable to regulate its body temperature. Cooler ocean temperatures during the Pliocene era led its preferred food, whales, to adapt, while the megalodon was unable to.