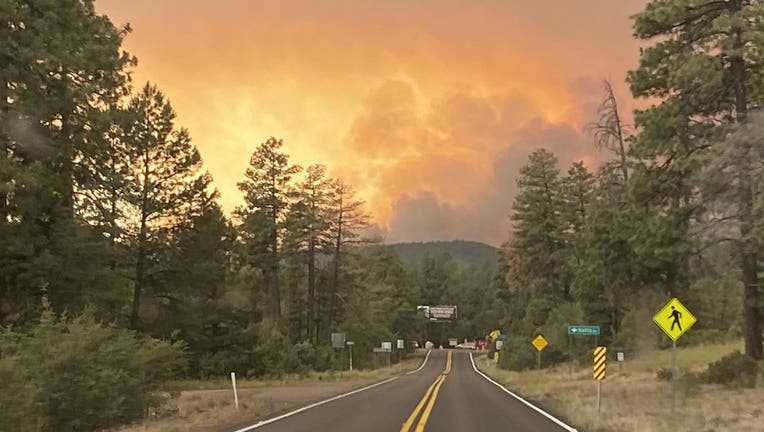 STRAWBERRY, Ariz. - Evacuations have been lifted amid a wildfire that has burned over 40,000 acres near Pine and Strawberry.

The Backbone Fire has burned 40,855 acres of land and there is 76% containment. It started shortly before midnight on June 16, about 12 miles west of Strawberry near a ridge named Ike’s Backbone.

On June 26, the SR 87 northbound closure was moved from milepost 255 to milepost 270 for Pine residents only, according to the Arizona Department of Transportation.

"The closure remains in place for others at milepost 255. No one is allowed past milepost 270," stated officials.

SR-87 has reopened north of Strawberry and Strawberry residents only are being allowed to return home.

All land, roads and trails in the Tonto, Coconino and Prescott National Forests that are in the area of the fire are closed.

The Red Cross Evacuation Shelter is moving to the Payson High School Dome, located at 304 S. Meadow St. in Payson. The Arizona Humane Society has deployed an emergency shelter at the same address.

Livestock sheltering is at the Payson Event Center, located at 1400 S. Beeline Hwy in Payson.

Timeline of the Backbone Fire

"There is a 75% chance of rain today. Firefighters will be working the fire's edge looking for any remaining hot sports and transporting excess supplies and equipment from containment lines to their fire camp," officials said.

The Backbone Fire is now 64% contained.

"There is a 50% chance of rain today and the probability increases over the next three days," officials said. "Firefighters will be working the fire's edge looking for any remaining hot spots and transporting equipment from containment lines to their fire camp."

The Backbone Fire has burned 40,855 acres and remains 43% contained.

"Today will be hot and dry with stronger winds out of the northeast," officials said. "Fuels have dried out from the recent rains and increased fire activity is possible with the low humidity and strong winds."

The Gila County Sheriff's Office says residents of Strawberry and Hunt Ranch will be moved to "SET" status at 4 p.m., allowing residents to return to their homes.

"The fire continues to remain on the east side of the Verde River. Crews are working along State Route 260 to prepare for firing operations if direct line construction is unsuccessful," stated the Southwest Area Incident Management Team.

"… Rainfall allowed for today’s change in suppression tactics and has provided firefighters opportunities to go direct on the fire edge along most of the fire perimeter," crews said.

As of June 24, the fire is less than two miles from the edge of Pine and Strawberry.

Wind is a big factor in the spread of the blaze. The fire is burning in an area with pinyon-juniper, chaparral, brush, grass and cactus.

"The concern is the dry vegetation, extremely dry weather," said Chief Deputy Mike Johnson with the Gila County Sheriff's Office. "The fire has actually moved a lot quicker than what we expected."

Officials say the fire is caused by lightning.

"This is a top priority fire for the United States," said Mike Reichling with the Southwest Incident Management Team. "We have all the heavy resources. The planes, helicopters."

A Facebook page has been set up for the latest information on the Backbone Fire.

Backbone Fire grows to over 40K acres near Pine, Strawberry

The Backbone Fire has grown to over 40,000 acres and remains 1% contained. Over 650 personnel are assigned to the fire.

"Overnight will see smoldering fire behavior because of recent rain," officials said. "On Thursday, outflow winds could be a problem. Low to moderate fire behavior is expected."

The fire has forced the evacuation of a number of communities. As of June 24, it has burned over 40,000 acres of land.

Backbone Fire grows to over 38K acres near Pine, Strawberry

The Backbone Fire has burned 38,321 acres and remains 1% contained.

Nearly 600 personnel are battling the fire, which was caused by lightning.

A community meeting will be held at the Philip England Performing Art Center in Camp Verde at 7 p.m.

A handful of evacuees were also camped out at the Payson Fairgrounds. Other evacuees have come by to make sure everyone is OK.

"We’re doing fine. We know a lot of people. I don’t have anywhere to go, don’t have anything, so we just thought we’d come by and see if we could get them anything," said Mitch Crum.

The Crum family is fairly new to the area, and already forced out of their home. They moved to the area to be part of a community, and like a good neighbor, they’re here to help.

"We’ve been through rough times ourselves, so we know what it’s like, and it sucks," said Crum.

During a community meeting held on June 23, officials say it could be a week at least before evacuees can move back in.

Fire officials say it could be at least a week before those evacuated as a result of the Backbone Fire can return home. FOX 10's Jennifer Martinez reports.

Man who lives near Backbone Fire describes conditions in the area

The Backbone Fire, which has burned more than 32,000 acres of land, is still not contained. FOX 10's John Hook and Linda Williams spoke with a man who lives in the Strawberry area.

Last night, fire personnel began a firing operation starting at the intersection of state routes 260 and 87 near the communities of Strawberry and Pine," officials said. "Crews plan to spend today holding and improving this line."

The Backbone Fire has grown to 32,757 acres and remains at 0% containment.

The fire continues to spread toward the northwest, and dry weather continues to cause extreme burning conditions.

"Today firefighters and heavy equipment will reinforce control features to the south and west of Strawberry and Pine; and prep for future burnout operations as necessary to strengthen holding features and protect the communities and values at risk," officials said.

Fire crews say they expect another day of extreme fire activity with growth to the north and east.

All land, roads and trails in the Tonto, Coconino and Prescott National Forests that are in the area of the fire are closed.

Some people, like Cindy Condit, evacuated with their pets.

"I've been very upset. Our pets, they're our family," said Condit, who has many pets, including dogs, goats and horses.

Milly Giannotti and her mother, Starr Davi, slept with their five dogs at a home improvement store parking lot before they went to the evacuation shelter at the high school.

"She required oxygen and her CPAP, and the cigarette lighter plug in wasn’t working that well in the truck," said Giannotti.

Many animals are sheltering at the Humane Society, while their humans take shelter at Red Cross locations nearby.

"They're angels, and there are so many of them here today," said Condit, who is one of 2,000 people evacuated from the Strawberry and Pine area.

Reichling said it could very well be a week before people evacuated are able to return to their homes.

Meanwhile, others in the community are helping out. Ashley Morris, who runs the Common Grounds coffee shop, dropped off some much-needed pick-me-ups for people at the shelter.

"It’s community. It’s what we all do around here. We all just step up to help around here. Pine and Strawberry are part of our community. They shop here, they work here," said Morris.

For Condit, she said as long as her family is safe and taken care of, she is content.

"Our fur babies are in good hands that we can come and see them," said Condit. "We are just so thankful for us. It is an answer to prayer."

95 personnel have been assigned to fight the wildfire.

Officials say more "extreme fire behavior" is expected because of low humidity and dry thunderstorms, which may cause gusty winds.

When Daniel Marchant heard about the fire, he headed up to his family's cabin in Strawberry.

"There is definitely smoke up in the sky you can see driving into Strawberry," said Marchant. "Smoke in the background, but as time went on, there was a lot more smoke."

Marchant cleaned out dry brush that was around in hopes to prevent the fire from getting to his property.

"It's a scary area for a fire to happen. We’ve been afraid that a fire would happen in this area for 20 years, but nothing since we've owned the house has ever gotten this bad," said Marchant.

Marchant was able to leave and head back to the Valley just before the 'set' order was issued. He mentioned there was already a huge line of people heading out, worried about what they will find when they return.

"I’m a pretty young guy, and this is a town that, for my entire life, I've enjoyed going up to and spending time," said Marchant. "It's a cute, close-knit community, and so seeing a fire of this devastation impacting Pine and Strawberry is heartbreaking."

Several other wildfires are burning in Arizona amid of period of intense heat across the U.S. Southwest.

Residents of the largest wildfire that has burned nearly 259 square miles (670 square kilometers) in Pinal and Gila counties are in various stages of evacuation.

Operations Section Chief Todd Abel said crews were focused Thursday on the southern end of the fire where it was advancing, partly because of wind gusts. Heat also has hampered firefighting efforts from the air, he said.

The so-called Telegraph Fire started June 4 and is 72% contained.

Another wildfire that started about a week later in the Santa Teresa Mountains in southern Arizona also has forced evacuations and the closure of federal land. The fire has burned 27 square miles (70 square kilometers) and is 15 percent contained.