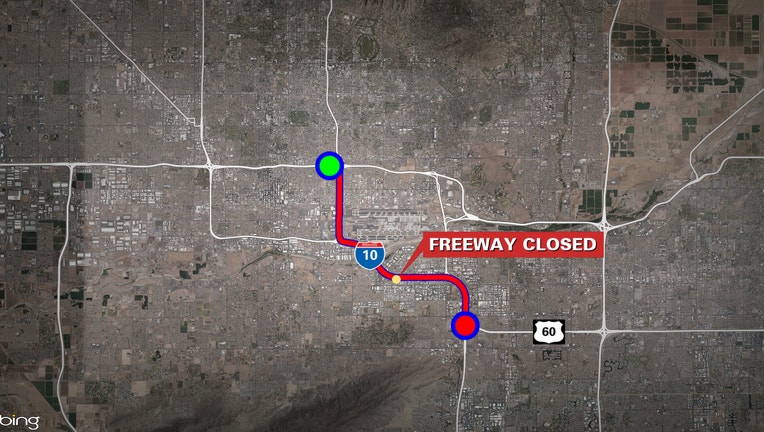 PHOENIX - This weekend will see another freeway closure along a portion of the I-10, as work on the Broadway Curve Improvement Project continues.

Here's what you need to know to plan ahead.

What part of the I-10 will be affected?

According to the project's official website, the freeway's eastbound lanes will be closed between State Route 51 (Piestewa Freeway) and US 60 (Superstition Freeway) from 10:00 p.m. on Aug. 27 to 4:00 a.m. on Aug. 30, due to pavement removal and work zone setup.

The following eastbound I-10 onramps will be closed:

The following southbound I-17 onramps will also be closed:

What other routes can I take to get around the closure?d

Drivers on southbound I-17, according to officials, will get on westbound I-10 taking the same aforementioned rote.

I need to get to Sky Harbor this weekend. What should I do?

ADOT officials say people headed to Phoenix Sky Harbor Airport from southbound I-17 can get off the freeway at 16th Street, turn left, continue north, and then turn right at Buckeye Road, where they will follow the signs to get to the airport.

Officials say drivers can also use other airport exits, such as Buckeye Road on westbound I-10, as well as other exits on eastbound Loop 202 or State Route 143. Drivers should allow for extra time.

What is the Broadway Curve Improvement Project?

ADOT officials describe the project as their largest urban freeway reconstruction project in Maricopa County. Work will take place on 11 miles of eastbound and westbound I-10 from the Loop 202 and the I-17, along with portions of the US-60 and State Route 143 near the I-10.

According to the project website, the project involves, among other things, widening the I-10 to six general purpose lanes and two high occupancy vehicle (HOV) lanes, in addition to adding collector-distributor roads between the US-60 and 40th Street to separate through traffic from local traffic.

Construction on the freeway, according officials, is expected to last until late 2024, barring unexpected delays.