The metro Phoenix area is seeing rain and hail, while northern Arizona has seen at least 7 to 9 inches of snow over the weekend.

FLAGSTAFF, Ariz. (AP) — The precipitation from a series of winter storms in Flagstaff is more than the city had during last summer’s monsoon season, and even more is coming, weather forecasters said.

The mountainous northern Arizona city recorded its driest monsoon seasons on record in 2020 and 2019.

Before midnight Sunday, the snowfall measured as water topped the 1.78 inches (4.52 centimeters) that fell as rain from mid-June to September at 1.86 inches (4.72 centimeters) so far.

Other Arizona cities were on track to do the same, said Tim Steffen, a National Weather Service meteorologist.

"It’s somewhat of a gee-whiz thing, but it also goes to show how dry last monsoon season was," he said.

The weather will ping pong the rest of the week with a blast of well-below freezing temperatures Wednesday morning in places like Flagstaff, Window Rock and the Grand Canyon. Temperatures then will moderate before a weaker storm moves in ahead of the weekend, Steffen said.

Schools across northern Arizona closed or had shortened schedules Monday as heavy snow fell across the region. The biggest of the storms that have slammed the state since last week was expected to last from Monday into Tuesday.

Flagstaff, Payson and Pinetop-Lakeside could get close to 3 feet (.9 meters) of snow or more before the storm moves out. Lower-lying areas also got snow, while places like Phoenix had rain.

Authorities urged people to stay home to avoid snow-packed and slick roads. Chains were required on vehicles in some areas. Major interstates were open but some roads were closed, including State Route 89A between Sedona and Flagstaff.

Drivers are being advised to consider delaying travel up north unless absolutely necessary, and officials say waiting out the storm is the safest option, as it allows snowplows to clear the highways faster.

FOX 10 photojournalist Tom Fergus was out in downtown Flagstaff checking out the winter weather as 1 to 2 inches of snow per hour are expected to fall in the area today.

ADOT officials say winter weather is responsible for the heavy traffic. They are asking people to wait out the storm if possible.

Meanwhile, the National Weather Service in Flagstaff is advising travelers to avoid parking along the freeways to play in the snow.

Snowbowl Road, which leads to the popular Arizona Snowbowl, closed due to an accident Monday morning. Snowbowl has also warned that the mountain is reaching COVID-19 capacity, and officials will be limiting the number of vehicles allowed up when the road reopens. 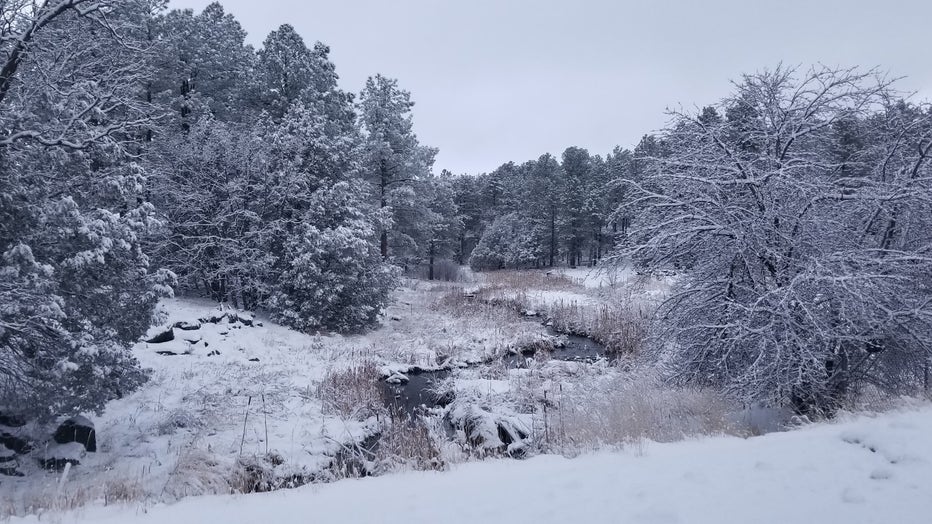 Classes canceled in Flagstaff for Tuesday

Officials with the Flagstaff Unified School District say all schools within the district will be closed on Jan. 26, including remote learning classes.

Classes, including remote learning, were also canceled on Monday.

"Decisions to continue remote learning, delay school, or cancel school are based on a number of factors that include weather forecasts, road conditions and closures, access to FUSD parking areas and sites, transportation, impact on instruction and scheduled activities, and timelines for mobilizing communication," the district said.

Officials with the Blue Ridge Unified School District in Pinetop also announced that schools will be closed on Tuesday. 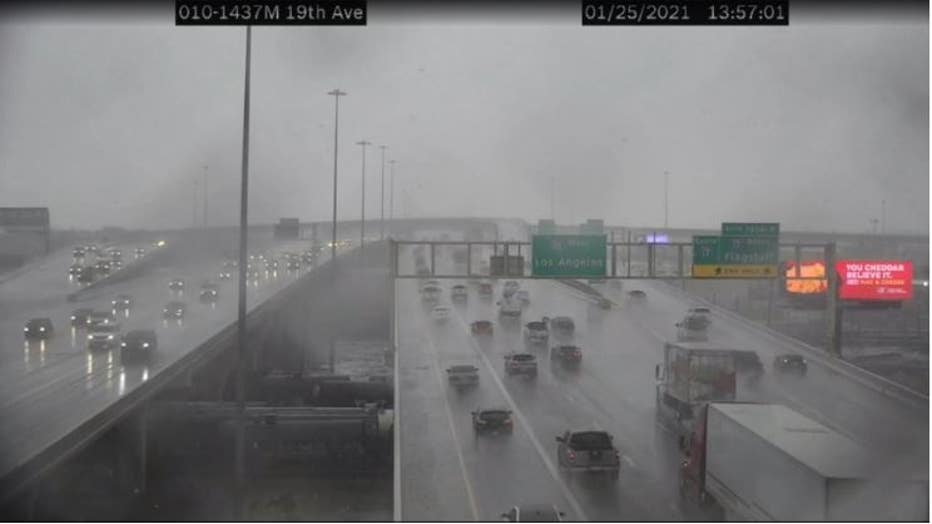 The view from Interstate 10 at 19th Avenue on Jan. 25, 2021 (ADOT says "Rain is continuing to come down across the Phoenix metro area; we're getting lots of reports of crashes and spinouts, as well as debris from high winds. Please slow down on wet pavement." / ADOT)

Rain, hail seen across the Valley

Storms did some damage in the Valley, taking down power lines in Phoenix near 31st Avenue and Union Hills.

Storm damage in the Valley

Cleanup is underway this morning after a winter storm brought heavy rain and wind to the Valley.

A Winter Storm Watch is in effect for areas in higher elevation east of Phoenix on Monday and Tuesday, while a Wind Advisory has been issued for the Valley until 10 PM on Monday.

The National Weather Service says wind above 30 miles per hour may be seen across south-central Arizona.

Rain is expected for the metro Phoenix area on Monday and Tuesday, with more widespread storms along with strong winds.

A Significant Weather Advisory has been used for Maricopa and Pinal Counties until 2 PM on Monday.

The Valley saw scattered showers Sunday morning, although some residents - specifically those in the southeast - saw more severe storm cells.

The National Weather Service reported that hail and graupel, or soft hail, has been reported along the US 60 near Superior.

Officials with Snowbowl say they only received 35 inches of snow this winter.

"We are looking at up to three feet until next Thursday or so, so it is huge news for us," said Arizona Snowbowl Marketing Manager Li Cui.

So far, the ski area has received only 35 inches, but the potential snowfall is expected to double their season total in just a few days.

This big storm coming in is also bringing a lot of skiers and snowboarders into Flagstaff.

As a thunderstorm rolled through Arizona, thousands of residents were without power as two major electric suppliers experienced outages on Jan. 25.