Griner has been placed at Female Penal Colony IK-2 in Yavas, which is in the region of Mordovia – the same area where American Paul Whelan is being held, according to Reuters.

"Brittney is doing as well as could be expected and trying to stay strong as she adapts to a new environment," her lawyers said in a statement.

Griner’s attorneys said her transfer out of a Moscow detention center was initiated on Nov. 4 but the State Department has maintained that Russia has yet to formally notify the White House of her transfer or where she was being taken.

"We are aware of the reports of her location and in frequent contact with Ms. Griner’s legal team, but the Russian Federation has still failed to provide any official notification for such a move of a U.S. citizen, which we strongly protest and disagree with," principal deputy spokesperson Vedant Patel said during a press briefing on Tuesday.

MORE: Kremlin: Any talks about Brittney Griner swap must be confidential

"Our mission in our embassy in Russia has continued to press for more information about her transfer and her specific current location. Following this sham trial and the unjust sentencing, the Russian Federation is transferring her from a prison to a remote penal colony."

Griner was arrested at Sheremetyevo Airport in Moscow on Feb. 17 after Russian officials said she was carrying vape canisters containing cannabis oil in her luggage. Despite pleading guilty to the charges, the two-time Olympic gold medalist claimed she inadvertently brought the substances with her and did not intend to break the law. 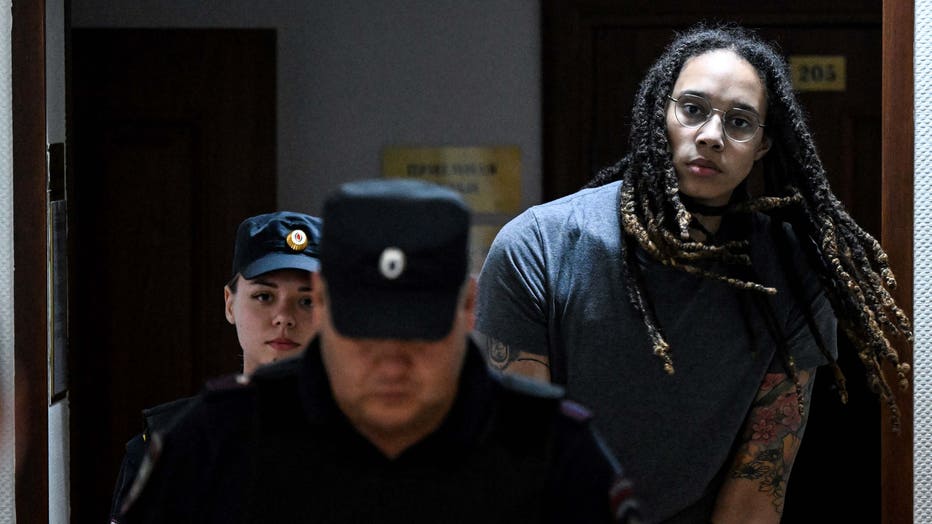 TOPSHOT - US Women National Basketball Association's (WNBA) basketball player Brittney Griner, who was detained at Moscow's Sheremetyevo airport and later charged with illegal possession of cannabis, is escorted to the courtroom to hear the court's f (Photo by KIRILL KUDRYAVTSEV/AFP via Getty Images)

She was sentenced to nine years in a Russian prison in August and her appeal was denied last month.

President Biden said last week he was hopeful that the Russian government would be more willing to negotiate the release of Griner and Whelan with the midterm elections over but State Department spokesman Ned Price later said Russia has yet to have any meaningful discussions on the subject.

"Well, the fact is, and what the president was alluding to, is the fact that the Russians up until now have not engaged with the seriousness of purpose in the constructive approach that we would have liked to have seen. We put forward this substantial proposal, as Secretary [of State Antony] Blinken announced a number of months ago now, for the release of Paul Whelan and Brittney Griner," Price said.

"The fact that Paul Whelan and Brittney Griner remain behind bars – Brittney Griner for some 10 months now, Paul Whelan for more than three years now – is a testament to the fact that this process has not moved as quickly as we would have liked. You've heard us say that from our end. This process has not been static. We put forward this substantial proposal. We've had discussions with the Russians. Those discussions are continuing. We're continuing to look for ways that we can secure as quickly as possible the release of Paul Whelan and Brittney Griner, so that they can be returned to their loved ones here in the United States."

Washington has maintained that Griner has been "wrongfully detained." Earlier this month, her wife, Cherelle Griner, said she believes her arrest was "political."