The Suns are set to take on the Dallas Mavericks for game 1 of the 2nd round playoffs. FOX 10's Stephanie Bennett has more on what Suns fans are doing.

PHOENIX - After a brief hiatus, the Phoenix Suns that bulldozed through the regular-season schedule made an appearance on May 2.

Deandre Ayton scored 25 points, Devin Booker added 23 and the top-seeded Suns rolled to a 121-114 win over the Dallas Mavericks in Game 1 of the Western Conference semifinals.

The Suns never trailed, jumping to a 9-0 lead in the opening minutes and staying on the gas until the final minutes. They shot 50.5% from the field, won the rebounding edge 51-36 and beat the Mavericks for the 10th straight time, counting regular-season games.

Phoenix had a few hiccups late — making the final score a little closer than it should have been — but the Suns looked much more like the team that set a franchise record with 64 wins during the season.

"We’ll take the win," Suns point guard Chris Paul said. "It’s not always going to be pretty. We played well most of the game. We’ll look at the film tomorrow and see what we need to do differently for Game 2."

Luka Doncic led the Mavericks with 45 points, 12 rebounds and eight assists. It’s the first time Dallas has advanced to the postseason’s second round in Doncic’s four-year NBA career.

Doncic and Maxi Kleber looked ready for the challenge but the rest of the Mavs didn’t do much until it was too late. Kleber finished with 19 points.

"I thought Maxi and Luka in that first half kept us afloat," Mavericks coach Jason Kidd said. "We could have easily been down 39 at halftime but Maxi and LD were good. LD was good in the second half, too.

"We’ve just got to get someone to join the party."

Game 2 is on Wednesday in Phoenix.

MORE: Mavericks, Suns both adversity-tested in these playoffs

Booker missed three games during Phoenix’s tougher-than-expected first-round win over the New Orleans Pelicans because of a strained right hamstring. He returned for the closeout Game 6 and scored 13 points, but looked a little more cautious than usual in his effort to stay healthy.

That hesitancy was gone in the first quarter on Monday: Booker scored 13 points on 4 of 8 shooting and added six rebounds and four assists.

Ayton dominated in the paint and mid-range, hitting his usual array of turnaround jumpers, runners and dunks. The 6-foot-11 center shot 12 of 20 from the field. Paul added 19 points and Cam Johnson had 17 off the bench.

"I liked the fact that we weren’t settling for 3s tonight," Suns coach Monty Williams said. "A lot of guys were attacking the paint, we were getting floaters and rim shots."

The Suns’ opening salvo was highlighted by a Jae Crowder 3-pointer and Booker’s lob pass to Mikal Bridges for a dunk. Phoenix extended its lead to 18-6 midway through the first quarter before a discombobulated Dallas called timeout.

The Mavericks stayed in the game for a while thanks to Doncic and Kleber, who hit his first four 3-pointers. The pair helped Dallas pull within 51-47 midway through the second but the Suns finished the half with another run, going into the break with a 69-56 lead.

Doncic was slow to get up in the second quarter after taking a knee to the groin from Jae Crowder, who was shooting a 3-pointer and called for the offensive foul.

After an official review, Crowder’s foul was upgraded to a Flagrant 1.

Suns backup center JaVale McGee brought the crowd to its feet early in the fourth quarter with a rare defensive play on the perimeter.

He stole the ball from Doncic and then dribbled the length of the floor, finishing with a powerful dunk to put the Suns up 21 points.

Mavericks: Doncic scored 14 points in the first quarter on 5 of 9 shooting. ... Kleber hit 5 of 6 3-pointers in the first half and had 16 points before the break. ... Kleber took a scary fall in the fourth quarter after being bumped by JaVale McGee while finishing a dunk. Kleber landed on his upper back and was shaken up for a few seconds before taking his free throw.

Suns: Crowder hit a 3-pointer in the second quarter then turned and started celebrating with former Cardinals receiver Larry Fitzgerald, who was sitting courtside. Fitzgerald is a part-owner of the franchise. ... It was the 30th consecutive sellout at the Footprint Center, dating back to the regular season. ... Improved to 51-0 this season when leading after three quarters, including a 4-0 mark in the playoffs. 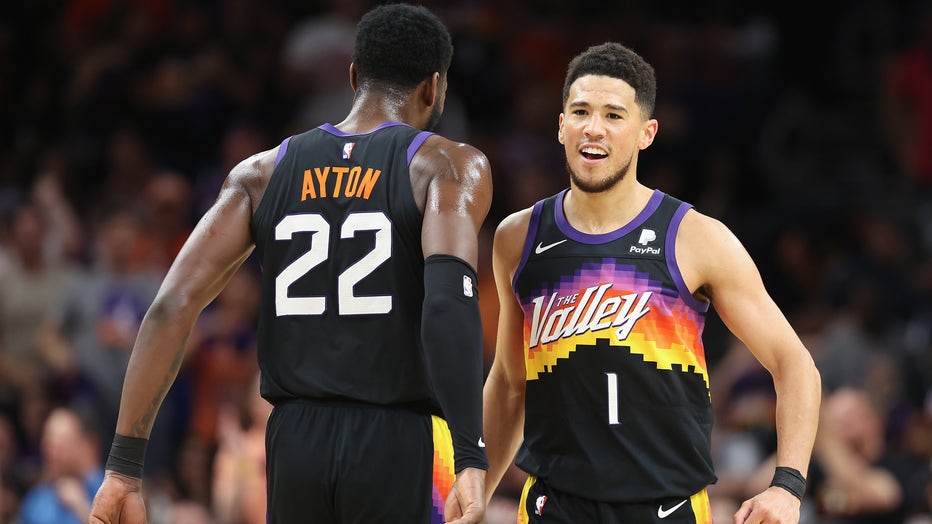 PHOENIX, ARIZONA - MAY 02: Devin Booker #1 of the Phoenix Suns celebrates with Deandre Ayton #22 during the first half of Game One of the Western Conference Second Round NBA Playoffs against the Dallas Mavericks at Footprint Center on May 02, 2022 in

Fans gather in Downtown Phoenix ahead of game

Fans are certainly getting ready for the Suns game against the Mavericks, and while many of them do not have to go far to cheer on their favorite team, some fans traveled from all over the country, just to be in Phoenix.

"I’m a Chris Paul fan, so I follow him where ever he goes," said Michael Becker, who lives in New Jersey.

Throughout the day, fans were picking up new jerseys and Phoenix Suns memorabilia.

For many of these fans, it is more than just a shopping spree.

"Being able to represent the team and what it stands for, I am so excited and proud, and I am happy to represent," said Caleb Porter.

Porter, who is a lifelong Phoenix Suns fan, lives in Utah, but he made sure to plan his trip to see family during this crucial time for the team.

"I was trying to plan it out around the playoffs, and we were worried with that Pelican series," said Porter.

Other shoppers who planned their trip from afar include Quinne Ubank, who came to Phoenix from Kentucky.

"Me and my dad always wanted to go to an NBA game together, so we got some tickets and get to skip school and get to see my favorite player, Devin Booker," said Ubank.

Among the more visible suns fans is none other than Mr. Orange himself. We caught up with him, as he got ready for the game.

"Superfans are a real thing," said Mr. Orange. "We exist. We are passionate."

"I expect us to win by double digits," said Mr. orange.

Among the Suns fans are also fans of the opposing team, as they're making their presence known in downtown Phoenix while donning their jerseys.

"We wanted to go to the team shop, but we are probably going to get kicked out," said one Mavericks fan.

As the Suns continue in the playoffs, businesses in the area of Footprint Center are cashing in, with restaurants like Chico Malo at Cityscape seeing an increase in sales, as fans come to watch the games at their bar or grab a bite.

"What we get is a lot of people visiting Downtown for the first time for going to the game, and not realizing Downtown is actually a great place to go out and dine," said a person with Chico Malo.