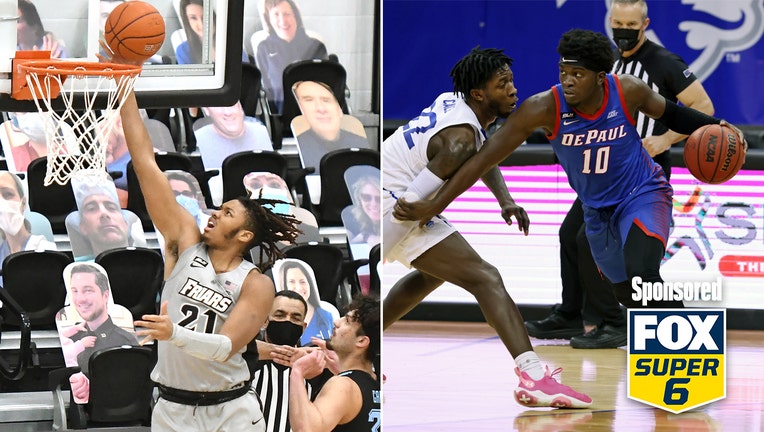 The second week in March at Madison Square Garden is something special.

After all, the game has a home in New York – with its playground legends, legendary figures and the biggest stage in the sport. When you walk inside that building, heading up the escalators to the seating bowl above Penn Station and step inside the seating bowl for the Big East tournament – you can tell that a frenzy is about to take place when basketball hits Broadway.

This year will be different with limited attendance and the normal pizzazz diminished due to COVID-19 regulations. But the Big East Tournament will still be something special, with an opening day tripleheader to kick it off capped by DePaul playing Providence (9 p.m., FS1) at the World’s Most Famous Arena.

There’s something on the line for you as well by playing FOX Super 6! Just answer the following six questions correctly and you could take home $1,000. Best of all, it’s free to play — just download the FOX Super 6 app on your phone or android device and make your picks right now, before tip-off!

Here are the questions and how to look at the game:

How many DePaul players will score in double figures?

DePaul is led by Charlie Moore, who averages 14.4 points a game, while Javon Freeman-Liberty is averaging 13.4 points as the only other Blue Devil to average in double figures for the season. DePaul only had one scorer in double figures in a 57-47 loss to Providence at home on Feb. 13 and that was David Moore, who scored 10. In the first meeting on Dec. 27, four Blue Devils — Roman Weems (21), Moore (19), Freeman-Liberty (13) and Paul Paulicap (10) — broke double figures during a 95-90 Providence win in double overtime.

How many Providence players will score in double figures?

All conversation with Providence begins with David Duke, who is the leading scorer at 17.2 points a game and could be heading to the NBA Draft when this season is over. He is joined by Nate Watson, who averages 16.8. Duke had 17 against the Blue Devils on Feb. 13 to lead the way with A.J. Reeves scoring 13. The first matchup back in December saw four players in double figures – Duke (24), Reeves (22), Watson (18) and Noah Horchier (10)

Will the total number of points scored in the game be over or under 133 points?

One thing that the tournament does do is tend to make possessions at a premium and minimize scoring. Remember that the last time these two teams played in February, they combined for 104 points and shot a combined 40-for-122 from the field (32.7 percent).

How many points will the top scorer for DePaul have in the game?

Moore has been the leading scorer in three of the last four games for the Blue Demons with two games averaging above 20 points. In DePaul’s last game- a 77-71 loss at Marquette- Paulicap lead the way with 20 points.

How many points will the top scorer for Providence have in the game?

Pick the team to win and by how many points?

At 4-13 and having a season that has been filled with COVID-19 postponements, it has been a really tough year for the Blue Demons. Providence still could harbor the idea of getting on a run in this tournament with the winner looking at Connecticut in the quarterfinals on Thursday night. Providence is the better team and they could win this rather handily.

Play the FOX Super 6 Challenge for college basketball throughout the conference tournaments and March Madness for your chance to win thousands of dollars, absolutely for free. Just download the Super 6 app now and make your picks!