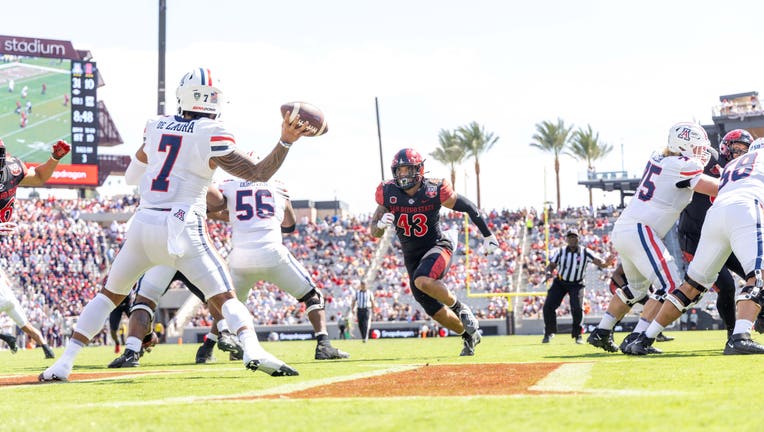 The Aztecs (0-1) waited two years for their new stadium to be built next to where 70,000-seat SDCCU Stadium once stood, and then were embarrassed by the Wildcats (1-0) on a 100-degree day. SDSU announced a sellout of 34,046. Many seats were empty at kickoff and the east stands, totally exposed to the sun, were mostly empty by the fourth quarter.

Arizona avenged a 38-14 loss to SDSU in its home opener last year during a 1-11 season. De Laura, who transferred from Washington State, completed 22 of 35 passes for 299 yards. He was intercepted once. Cowing, a transfer from UTEP, had eight catches for 152 yards.

The Wildcats sacked transfer Braxton Burmeister on the first play from scrimmage, forced SDSU to punt and then scored the stadium’s first points on Tyler Loop’s 25-yard field goal.

De Laura, the Pac-12 Freshman Offensive Player of the Year at Washington State last season, hit Cowing for on a 17-yard pass for a 10-0 lead and then found freshman Tetairoa McMillan on a 4-yarder to make it 17-3 midway through the second quarter.

SDSU pulled to 17-10 on Burmeister’s 11-yard pass to Tyrell Shavers. The Aztecs had a great chance to tie the game after Noah Tumblin intercepted de Laura at the 40. Chance Bell rumbled into the end zone from 25 yards, but the play came back on a holding penalty. Jaxen Turner intercepted Burmeister on the next play and returned it 20 yards to set up de Laura’s 4-yard scoring pass to Cowing with 28 seconds left in the first half.

Arizona took the opening kickoff of the second half and moved 75 yards in five plays, with Cowing pulling in a 25-yard scoring pass for a 31-10 lead.

SDSU scored 10 points in just more than three minutes to close to 31-20. Punting from his own end zone, Arizona’s Kyle Ostendorp booted the ball into a lineman’s backside and Jaylon Armistead recovered for a touchdown. Jack Browning kicked a 23-yard field goal.

Arizona looked nothing like the team that staggered to a 1-11 finish in coach Jedd Fisch’s first season. The Wildcats reloaded with 50 new players, including 11 from the transfer portal. De Laura transferred from WSU after throwing for 2,796 yards and 23 touchdowns, while Cowing moved over from UTEP after tallying 1,354 yards receiving.

San Diego State has a lot of work to do coming off a school-record 12-win season and a No. 25 ranking in the final Associated Press Top 25 poll. The defense, which returns seven starters, was pushed around much of the game.

Arizona State’s two marquee transfers had sterling debuts and the rest of the new-look Sun Devils were sharp most of the night, opening the season with an easy win over an FCS opponent.

Arizona aiming for next step in Jedd Fisch’s 2nd season

Arizona’s first season under coach Jedd Fisch was dotted with lopsided losses and just one win against a team depleted by COVID-19.