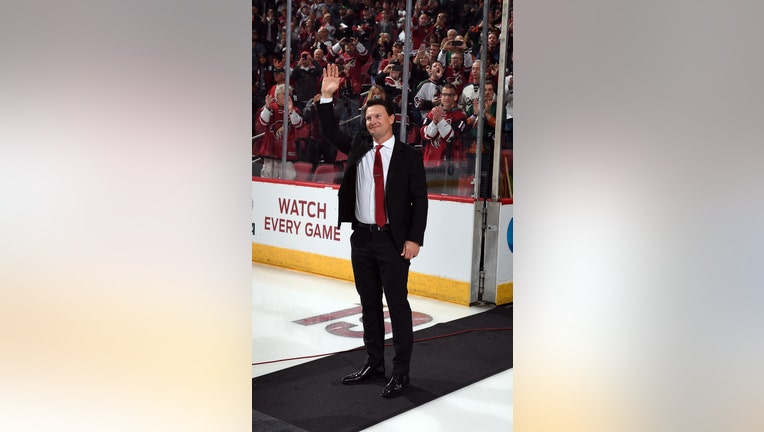 Shane Doan waves after a pregame ceremony to retire his jersey before the game between the Arizona Coyotes and the Winnipeg Jets at Gila River Arena on February 24, 2019 in Glendale, Arizona. (Photo by Norm Hall/NHLI via Getty Images)

GLENDALE, Ariz. - Shane Doan is returning to the Arizona Coyotes. On Jan. 11, the team announced that the longtime former captain has been hired as chief hockey development officer.

Doan will serve as a strategic advisor to owner Alex Meruelo and general manager Bill Armstrong, supporting the business and hockey operations departments.

"Shane Doan is a Coyotes legend and a Valley icon," Coyotes President and CEO Xavier Gutierrez said in a statement. "For the past 25 years, Shane has been an incredible ambassador for our franchise and has represented the Coyotes with dignity and class. He is beloved by our fan base and we are thrilled to have him back with us where he belongs."

Doan spent all 21 NHL seasons with the Coyotes, starting with the franchise's last season in Winnipeg before moving to the desert in 1996. He served as Arizona's captain the final 13 years of his career before retiring after the 2016-17 season.

A two-time NHL All Star, Doan holds numerous team records, including games played, goals, assists and points. His No. 19 was retired by the team in 2019.

"I am very excited and grateful for this opportunity," Doan said. "I am extremely proud to have played my entire career for the Coyotes and all I want is for this franchise to be successful on and off the ice.