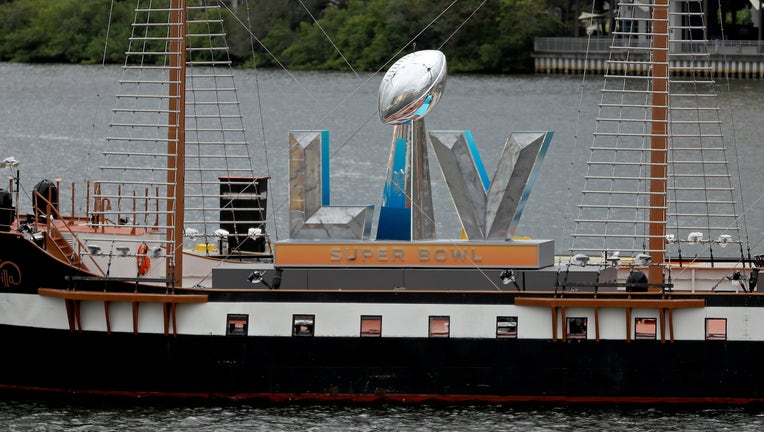 A view of the pirate ship Jose Gasparilla ahead of Super Bowl LV on February 1, 2021 in Tampa, Florida. (Photo by Mike Ehrmann/Getty Images)

Kansas City Chiefs superfan Ty Rowton hugged strangers in the streets of Miami last year after watching his team win the Super Bowl and then joined hundreds of thousands of fans back home at a victory parade, thinking little of a mysterious virus that his buddies were beginning to talk about.

The championship seems like a lifetime ago. Now the Chiefs are preparing to play in the Super Bowl again, and the virus has morphed into a once-in-a-century pandemic that has health officials on edge as fans congregate at parties and bars for the game.

The nation’s top health officials sounded the alarm this week about the Super Bowl being a potential superspreader event, and they urged people to gather with friends over Zoom, not in crowds.

RELATED: What fans can expect this weekend in Tampa, the Super Bowl city

"I’m worried about Super Bowl Sunday, quite honestly. People gather, they watch games together. We’ve seen outbreaks already from football parties," said Rochelle Walensky, head of the Centers for Disease Control and Prevention. "So I really do think that we need to watch this and be careful."

The Super Bowl comes as the nation sees a dramatic drop in new virus cases — a sign that the infection spike from holiday gatherings is easing. The virus has killed more than 459,000 people in the U.S., but the seven-day rolling average for daily new cases went from 180,489 as of Jan. 22 to 125,854 as of Friday, according to data from Johns Hopkins University.

Health officials fear the game could seed new cases at exactly the wrong time. Just this week, the new coronavirus strain that spread quickly in the United Kingdom was confirmed in Kansas after turning up in several other states. Other highly contagious variants also have scientists worried. States are in a race to vaccinate before the newcomers become widespread and additional strains emerge.

After a long year of shutdowns, it remains to be seen whether Americans will heed the warnings for an event that was watched by more than 100 million people last year. The fact that it’s Tom Brady seeking his seventh Super Bowl victory against Kansas City’s star quarterback, Patrick Mahomes, only adds to the intrigue surrounding the game.

Super Bowl LV will have the lowest attendance in NFL history, but that doesn't mean league officials are skimping on security measures this year.

Rowton, who goes to games wearing an arrowhead on his head and a cape signed by players, won’t be hugging strangers this year. But he won’t exactly be following the advice of health officials either: He plans to eat barbecue and watch the game in a friend’s basement "man cave." He will be unmasked with about 10 other fans.

"I have lost a lot more people to drugs this year who have relapsed, so for me it is one of those where I can’t live in fear because if I do that, I will probably relapse and start drinking again, and that will end up killing me for sure," said Rowton, a recovering alcoholic who attended 329 straight home games before ending the streak this season.

The game will be played in front of about 22,000 fans in Tampa, many of them vaccinated health workers.

In Tampa, Mayor Jane Castor announced a temporary ordinance requiring that masks be worn outside in several popular gathering spots. The order states that violators could be fined $500 as a "last resort."

Another ordinance requires masks at any indoor location when social distancing is not possible. That would include many bars and restaurants but not private residences.

The city has acquired 150,000 donated masks that officials will give out to anyone who needs one in the days leading up to the Super Bowl. The slogan is "need a mask, just ask."

Castor, a former Tampa police chief who handled law enforcement for past Super Bowls in the city, said she is keenly aware that the goal is to prevent the game from becoming an event that triggers a spike in infections.

"We are hosting an event that is going to be the most watched sporting event in the entire world," she said. "We have got to get this right."

As part of that effort, Castor released a joint video with Kansas City, Missouri, Mayor Quinton Lucas urging caution. Last year, an estimated 20,000 people showed up at the Power & Light District in downtown Kansas City to watch the Super Bowl on a massive screen.

Lucas called for the exact opposite in the video: "I encourage everyone to celebrate in small groups instead of squeezing into a crowded bar."

Hospitals in Kansas, Missouri and several other Midwestern states were bursting in November and December with coronavirus patients, although cases have dropped recently. The situation was so dire at one point that rural patients were being flown hundreds of miles for treatment because closer hospitals were full. Health officials don’t want to see that scenario repeated.

"If you have 10 or 20 people you are meeting with, there is a very good likelihood that one or two of those people will have COVID-19," said Dr. Dana Hawkinson, director of infection control for the University of Kansas Health System, which was inundated during the surge. "If you are in a small enclosed space, then three or four of those people will get it."

Kile Chaney, a 42-year-old stone mason from Harrisonville, Missouri, said he will have no trouble following that advice. He described himself as introverted by nature and said he plans to barbecue wings and watch the game at home with his family.

"We don’t usually make too big of a deal to go out to Super Bowl parties anyway," Chaney said, "so the COVID thing is not going to play into how we celebrate a Chiefs victory."