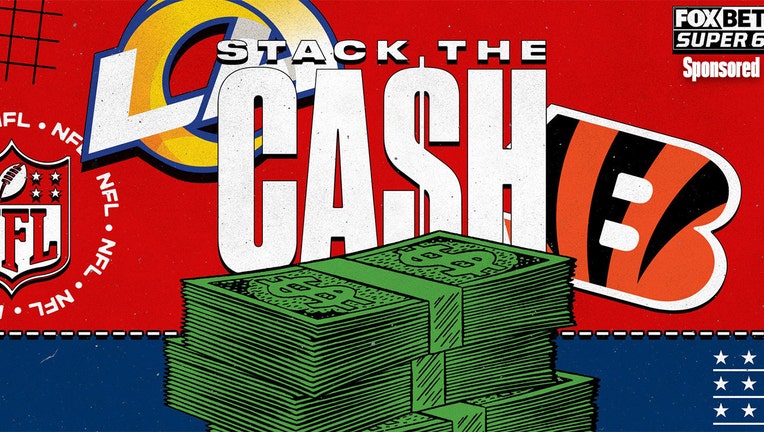 Ready to win big absolutely for free on Super Bowl LVI? Here's how FOX Bet Super 6 is helping you "Stack the Cash" for Rams vs. Bengals.

What a long, strange trip it's been, friends, from the Kansas City Chiefs being preseason Super Bowl favorites to the hometown Los Angeles Rams hosting the longshot of all longshots, the Cincinnati Bengals, in Super Bowl LVI.

And with Sunday's big game nearly upon us, we're all in luck, as FOX Bet Super 6 is bringing back "Stack the Cash" one last time for Super Bowl LVI. With FOX Bet Super 6, all you have to do is answer six questions about Sunday's game, and if you're right, you can win the jackpot.

With "Stack the Cash", there's a simple twist: the more people who enter the Super 6 contest for this weekend's NFL clash, the higher the jackpot climbs! And this week's grand prize, which started at a cool $100,000 of Terry Bradshaw's money, has already climbed to nearly $200,000 and counting!

So, how can you get in on the action? First, if you haven't already, download the FOX Bet Super 6 app. Then, enter Sunday's Super Bowl LVI Stack The Cash Challenge. Make your predictions, then tune in to see if you're right!

But with "Stack the Cash," there's one more step — don't forget to tell your friends, family, neighbors, grocery store cashiers and everyone else to enter and make their picks. Because remember: the more people who enter the contest, the bigger the jackpot will be for whoever takes home the prize.

To help you get to the pay window, here are my thoughts on this week's Super 6 contest.

How many total TDs will there be in the game?

The total scoring over/under has ticked down from 50.5 to 48.5 since the line opened, and that might go down even further. Be careful just assuming two good QBs will result in a shootout. Remember — the year Peyton Manning threw 55 touchdowns, his Broncos offense was held to one TD in a blowout loss to Seattle. And the Rams got to the Super Bowl in 2019 with the No. 2 offense in the league and didn’t score a touchdown against the Patriots.

The Bengals feature a second-year QB and a coach who entered the season on the hot seat. The Bengals-Raiders game totaled three TDs; so did Bengals-Titans. The Bengals-Chiefs game went to OT, and there were five TDs.

I’d take a flier and go opposite of what the masses are projecting: an ultra low-scoring game.

Which QB will have more passing yards, and how many will they have combined?

Joe Burrow, Matthew Stafford, or Tie, with ranges from 0 to 701-plus yards

The Rams will have a lot of success on the ground versus a suspect run defense (13th in efficiency), and there’s a decent chance both QBs struggle to top 200 yards passing. Ignore Stafford’s stats against the 49ers (337 yards) and Bucs (366 yards), as they were playing from behind versus San Francisco, and running against the Tampa front is a fool’s errand. Stafford also only passed for 202 yards in the win over Arizona, as McVay leaned heavily on the run.

That somewhat mirrors a crucial mistake the Chiefs made against the Bengals — nursing a double-digit lead, they kept passing against three or four man fronts. McVay will lean heavily on Cam Akers and Sony Michel, especially if they have a lead. Joe Burrow will be throwing, because the Bengals' offense won’t be able to run the ball against the fifth-best run defense in the league. The last time the Bengals faced a top-10 run defense (the Raiders), Mixon had just 48 yards rushing, and Burrow attempted 34 passes.

Who will have more receptions, and how many receptions will they have combined?

Tee Higgins, Odell Beckham Jr., or Tie, with ranges from 0 to 14-plus receptions

This will come down to how the Rams defend rookie Ja’Marr Chase. They have two choices: Jalen Ramsey shadows him all over the field, or they put Ramsey on Tee Higgins and bracket/double team Chase.

The talk all week has been Ramsey wants all the Chase smoke, and the matchup would make Higgins a much larger point of the offense. He was a star at Clemson, and he’s an over-the-middle threat who had a monster game versus K.C. (six catches for 103 yards) but was dormant versus the Raiders in the opening round (1-10).

Often, when Chase has a monster game, Higgins is quiet, and vice-versa. Chase had nine catches and 112 yards versus the Raiders, but only 6-54 against the Chiefs. This one feels like a Higgins game. Beckham, who Beckham will occasionally be going against former teammate Eli Apple, is no longer a No. 1 receiver, but he’s certainly one of the best No. 2 receivers in the NFL.

Which team will make the longer field goal, and how long will it be?

Rams, Bengals, or Tie, with ranges from 0 to 54-plus yards

How can you go against Evan McPherson, the rookie from Florida who has been incredible in the postseason? He’s 12-for-12 in the playoffs with two walk-off game winners. He’s 12-of-14 from beyond 50 yards (regular season and playoffs), while his counterpart, Matt Gay, has only made 4-of-6 from that distance this season, including none in the postseason.

In fact, Gay hasn’t made a field goal from beyond 46 yards since December 21st. Sure, he’s indoors and has kicked more at SoFi, but Sean McVay is more likely to go for it in the middle of the field instead of trotting out his kicker who couldn’t deliver from 54 versus the 49ers or 47 versus the Bucs in the last two games.

Which team will have more total tackles, and how many will they have?

Rams, Bengals, or Tie, with ranges from 0 to 70-plus tackles

The Rams are known as a high-octane passing attack, but in reality, Sean McVay loves to work the ground game. They dominated time of possession against the Bucs and 49ers, wearing down both defenses despite not picking up one explosive carry (20-plus yards). Stafford has the ability to push the ball downfield with his powerful arm, but moving the sticks with the short precision passing game and making fewer risky throws seems to be what McVay is favoring right now.

All of this adds up to more offensive plays and thus many more tackles for the Bengals. The Bengals are a very boom-bust offense, and I expect their defense to be on the field much longer. When the Rams are milking a fourth-quarter lead, the Akers/Michel duo will be pounding away at the soft middle of the Cincinnati defense.

Which team will win and by how many points?

Rams or Bengals, with ranges from 1 to 17-plus points

Tough not to like the Rams here. Besides playing at home, they were the better team all season, and you shouldn’t let a terrific postseason run from the Bengals obscure the fact this team was inconsistent all year. Every season-long metric favors the Rams.

If you’re in the "but luck has been on their side" camp when it comes to the Bengals, sure, the goal line stand versus the Raiders was terrific; getting three Ryan Tannehill interceptions was fortuitous; overcoming an 18-point deficit in Arrowhead was incredible.

But facts are facts. The Rams will be the best defense the Bengals have faced since the 49ers in December (a loss). In fact, the Bengals have not faced one top-five defense all season. The Rams should be able to pressure Burrow off the edges, and this doesn’t feel like a close game.

Play FOX Super 6 every week for your chance to win thousands of dollars, including the "Stack the Cash" Super Bowl LVI Challenge and many more contests. Just download the Super 6 app and make your picks today!