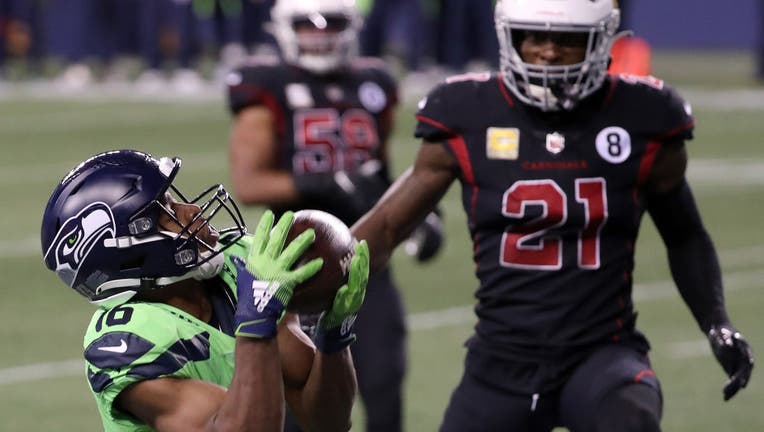 SEATTLE, WASHINGTON - NOVEMBER 19: Tyler Lockett #16 of the Seattle Seahawks catches a pass for a touchdown in front of Patrick Peterson #21 of the Arizona Cardinals at Lumen Field on November 19, 2020 in Seattle, Washington. (Photo by Abbie Parr/Get

SEATTLE - A key play by the defense led the Seattle Seahawks to an important NFC West win Thursday night, defeating the Arizona Cardinals 28-21 at Lumen Field.

Russell Wilson rebounded from his worst performance of the season to throw for two touchdowns, and the Seattle Seahawks moved back on top of the NFC West with a 28-21 win over the Arizona Cardinals on Thursday night.

Wilson was flawless, erasing the mistakes from the past four weeks when Seattle dropped three of four, including losses in the past two weeks to Buffalo and the Los Angeles Rams. The skid left Seattle in a tie on top of the NFC West with the Rams and Cardinals.

For a few days, Seattle (7-3) will be back on top alone until the Rams play on Monday night against Tampa Bay. It was an important victory for the Seahawks heading into the softest part of their schedule, with four upcoming games against teams with a combined 8-28-1 record.

Wilson was 23 of 28 for 197 yards and TD passes of 25 yards to DK Metcalf and 11 yards to Tyler Lockett in the first half. Wilson had committed 10 turnovers in the previous four games combined, a stretch that started with Seattle’s 37-34 overtime loss to Arizona in Week 7.

Lockett, who had 15 catches for 200 yards and three TDs in the first meeting with Arizona, had another nine catches for 67 yards.

But the biggest boost for Seattle was the return of its run game. Carlos Hyde rushed for 79 yards and a 2-yard TD run in the third quarter, and Seattle finished with 165 yards rushing.

Kyler Murray and DeAndre Hopkins couldn’t rekindle the magic from their last-second touchdown to beat Buffalo last Sunday. Murray was 29 of 42 for 269 yards and two TDs, but Seattle was able to get the kind of pressure on the QB that was missing from the first meeting.

And that pressure came through in the closing seconds. On fourth-and-10 at the Seattle 27 with 38 seconds left, Carlos Dunlap got around the edge and tackled Murray for his second sack of the night. Seattle finished with three sacks and seven QB hits after not touching Murray in the first meeting. 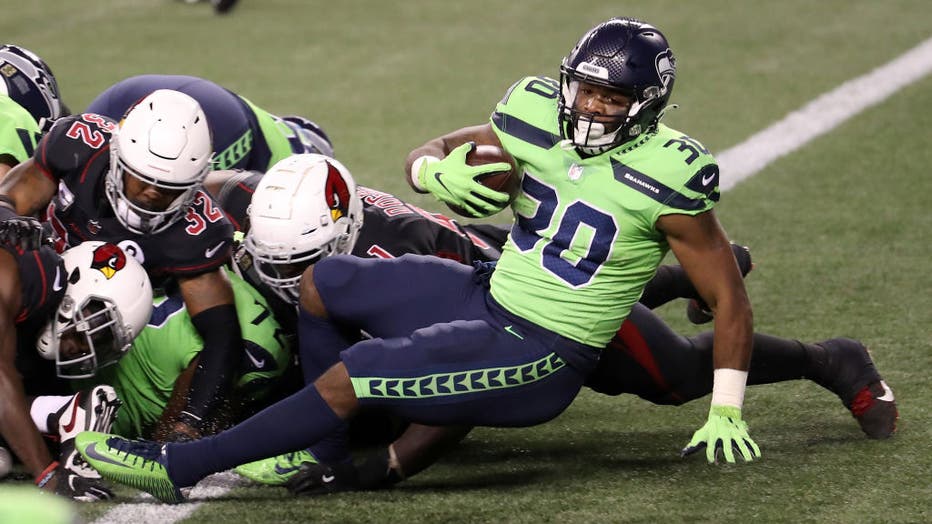 SEATTLE, WASHINGTON - NOVEMBER 19: Carlos Hyde #30 of the Seattle Seahawks runs in for a touchdown against the Arizona Cardinals in the third quarter at Lumen Field on November 19, 2020 in Seattle, Washington. (Photo by Abbie Parr/Getty Images)

Arizona (6-4) closed to 23-21 with 13:19 left when Murray capped a 15-play, 90-yard drive with a 3-yard TD pass to Chase Edmonds. The Cardinals defense held, but backed up near their goal line, J.R. Sweezy was called for holding on L.J. Collier in the end zone, giving Seattle a safety with 9:12 left.

Arizona almost didn’t get the ball back. Seattle ran nearly seven minutes off the clock and Jason Myers’ 41-yard field goal gave the Seahawks a 28-21 lead with 2:19 to go.

Arizona lost starting safety Jalen Thompson in the closing seconds of the first half with a right leg injury. Thompson had to be helped off the field and onto a cart, putting no weight on the leg.

Hopkins became the youngest player in league history to reach 700 career receptions with his lone catch in the first half. Hopkins, 28, bettered the previous record held by his teammate, Larry Fitzgerald. Fitzgerald was just past his 29th birthday when he reached 700 catches.

But Hopkins was limited to five catches for 51 yards. Fitzgerald led Arizona with eight receptions.

Seahawks: At Philadelphia on Monday, Nov. 30.

A local nurse and his wife got the surprise of a lifetime with the help of two special guests.