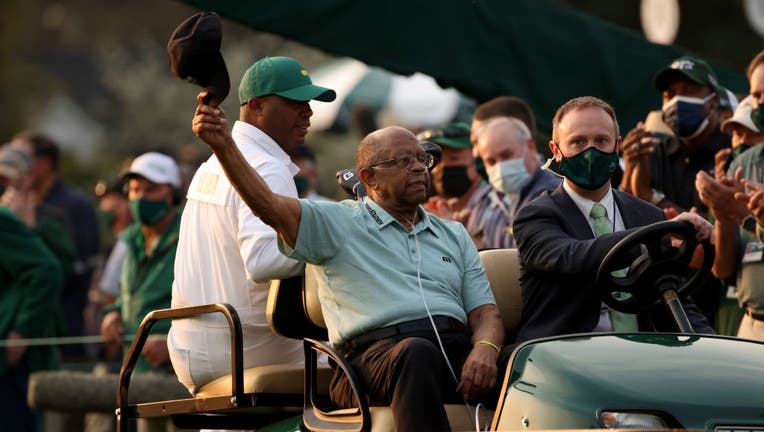 AUGUSTA, GEORGIA - APRIL 08: Honorary Starter Lee Elder of the United States waves to the patrons as he arrives to the opening ceremony prior to the start of the first round of the Masters at Augusta National Golf Club on April 08, 2021 in Augusta, G

Lee Elder, who broke down racial barriers as the first Black golfer to play in the Masters and paved the way for Tiger Woods and others to follow, has died at the age of 87.

The PGA Tour announced Elder’s death, which was first reported by Debert Cook of African American Golfers Digest. No cause or details were immediately available, but the tour said it confirmed Elder’s death with his family.

A native Texan who developed his game during segregated times while caddying, Elder made history in 1975 at Augusta National, which had held an all-white tournament until he received an invitation after winning the Monsanto Open.

Elder missed the cut but forever stamped himself as a groundbreaking figure in a sport that had never been known for racial tolerance.

David Ksieniewicz of Okatie, South Carolina, was golfing with his family on March 5 when he found himself in quite the predicament: His shot landed perfectly on the back of a nearby alligator.

Twenty-two years later, Woods became the first Black golfer to capture the green jacket, launching one of the greatest careers in golf history.

This past April, in the wake of social justice protests that roiled the nation, the Masters honored Elder by having him join Jack Nickaus and Gary Player for the ceremonial opening tee shots.

Elder was in poor health and unable to actually take a swing, but he held up his driver proudly at the first tee, clearly moved by the gesture.

"For me and my family, I think it was one of the most emotional experiences that I have ever witnessed or been involved in," he said.