GLENDALE, Ariz. - Kliff Kingsbury was a fan of Patrick Mahomes before it became cool.

It was nearly 10 years ago that Kingsbury — who was trying to build his program at Texas Tech — ventured to East Texas and decided the little-known, unpolished Mahomes was his quarterback of the future.

"They were really the first and only," Mahomes said. "I didn’t get recruited much. I got a couple other offers from small schools in Texas, but they’re the ones that came down and saw me and talked to my family and believed in me."

Turns out Kingsbury has a pretty good eye for talent.

Nearly a decade later, the mentor and student meet again in the NFL.

Mahomes and the Kansas City Chiefs travel to face Kingsbury’s Arizona Cardinals in Sunday’s season opener. The Chiefs are trying to make the AFC title game for a fifth straight season while the Cardinals want to get back to the playoffs for a second straight year.

Mahomes played three years for Kingsbury at Texas Tech, growing into an NFL-caliber quarterback. Now in his sixth season with Kansas City, he has already won an MVP and a Super Bowl.

While Kingsbury certainly boosted Mahomes’ football career, the same could be said in reverse. Kingsbury’s work with Mahomes helped the coach earn a reputation for being good with young quarterbacks, which is a big reason he was hired to take over the Cardinals and work with then-rookie quarterback Kyler Murray.

Murray isn’t as accomplished as Mahomes, but he’s still a two-time Pro Bowl selection. Kingsbury said the two aren’t exactly alike, but they do share some traits that make them good quarterbacks.

"The ability to play off-schedule," Kingsbury said. "Pat’s not as fast, but he’s a little bit bigger, where Kyler is more quick-twitch and can really leave people when he takes off. I think the baseball background with the arm angles, being able to get the snap quick and getting it out in a quick release definitely plays into it for both of him."

MORE: Cardinals' Antonio Hamilton to miss 4 games after being burned in cooking accident

The Cardinals are trying to get off to a fast start for a second straight season. They started last year by winning seven straight and improved to 10-2 before fading down the stretch.

"That’s all that matters."

The Chiefs have nine of their 10 draft picks on the 53-man roster, with the other player on their practice squad. Most are expected to play key roles this season, including first-round picks Trent McDuffie at cornerback and George Karlaftis at defensive end, both of whom could start Sunday.

WR Skyy Moore, a second-round choice, is expected to help replace the offense that departed when Tyreek Hill was traded to the Dolphins.

It’s the Arizona debut for receiver Marquise "Hollywood" Brown, who was acquired by the Cardinals in a draft day deal back in April.

Brown was a 1,000-yard receiver last season for the Baltimore Ravens. His production will be needed, especially during the season’s first six games, because three-time All Pro DeAndre Hopkins will be out after his suspension for violating the NFL’s performance-enhancing drug policy.

Brown and Murray played together at Oklahoma.

Hill set a slew of records during his time with Kansas City, and the Chiefs intend to replace his production with a committee approach.

Along with Moore, the Chiefs added former Steelers standout JuJu Smith-Schuster and ex-Packers wide receiver Marques-Valdez Scantling in free agency. They join Mecole Hardman, the top returning wide receiver, and tight end Travis Kelce, who remains one of the best pass-catching tight ends in the game.

The Cardinals will debut their new-look defense against the Chiefs, elevating several young players into more prominent roles. All eyes will be on linebackers Isaiah Simmons and Zaven Collins, who were taken with back-to-back first-round picks in 2020 and ’21.

Both have had good moments during their short careers, but will now be asked to take on more prominent roles. Simmons will have play-calling responsibilities, relaying information from defensive coordinator Vance Joseph.

Since coming to the NFL, Kingsbury and Mahomes have never lost in Week 1.

Kingsbury’s Cardinals have a 2-0-1 record since his arrival before the 2019 season. The Chiefs have won all four of the season openers Mahomes has started dating to 2018. 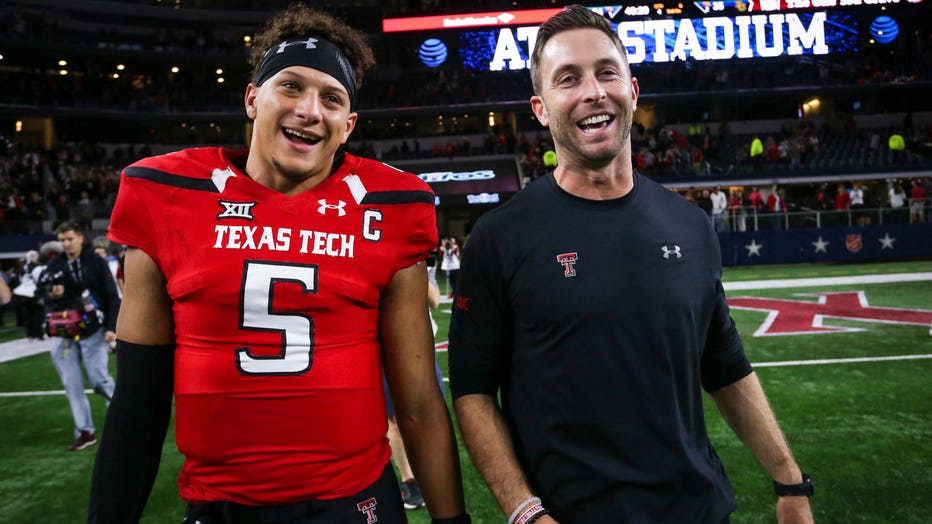 Texas Tech quarterback Patrick Mahomes II (5) and head coach Kliff Kingsbury walk off the field after after a 54-35 win against Baylor at AT&T Stadium in Arlington, Texas, on November 25, 2016. (Richard W. Rodriguez/Fort Worth Star-Telegram/Tribune News Service via Getty Images)