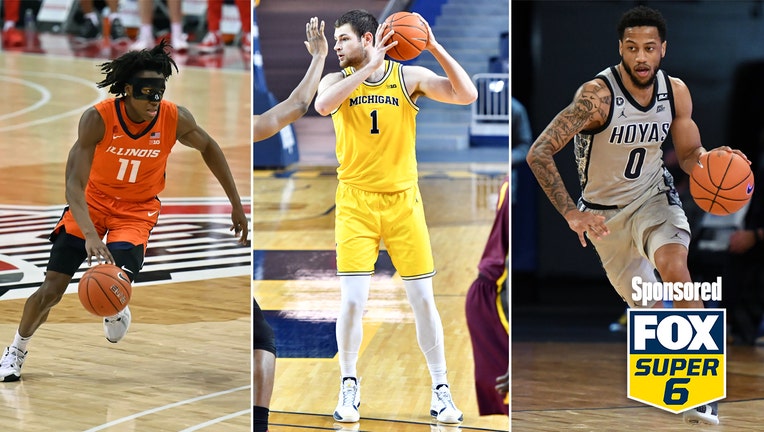 It’s been a while, but it’s great to have our old friend ⁠— the bracket ⁠— back again.

Since Virginia cut down the nets in Minneapolis two seasons ago, the NCAA Men’s Basketball Tournament has been silent, with the initial outbreak of the COVID-19 pandemic forcing the cancellation of the 2020 edition.

Like everything else this year, the tournament will look different in 2021, with limited crowds, sequestered teams and a one-site-only approach in Indianapolis, as opposed to a national celebration in eight cities. But it is still going to command our attention, get us to fill out office pools and keep us entertained with buzzer-beaters and upsets.

The first round of the tournament begins Friday and continues Saturday afternoon, and FOX Super 6 allows you to add some excitement to the proceedings — for free — by giving you a chance to win the $1,000 grand prize.

All you have to do is download the FOX Super 6 app and correctly answer the six questions listed. It’s simple, fun and free!

Here are the questions for the first round:

How many teams ranked 11-13 will win their first game?

Some of the biggest appeals of the tournament are the teams seeded in double figures that are able to pull off upsets. The ones that make the most headlines are the 12-over-5 upsets, which seem to happen every year. In 2019, three No. 12 seeds upset No. 5 seeds.

This year’s fashionable picks in the 11-to-13 range include Winthrop, which catches shorthanded Villanova after a 23-1 regular season, and Georgetown, a hot pick after the Hoyas ran through the Big East.

If you are looking at a 13-seed that could cause trouble, turn to Ohio, which has 4-seed Virginia coming off COVID-19 protocols that forced an exit from the ACC Tournament.

What will be the lowest seed to advance to Round 2?

The top eight seeds are all pretty solid in most minds, so a UMBC-type upset like we saw in 2018 is unlikely.

The 3-seed that could raise an eyebrow for a possible upset might be Kansas (facing Eastern Washington) if only because of the Jayhawks' COVID issue after the Big 12 tournament. Teams that have experienced COVID-19 layoffs have tended to struggle in return games. That’s why seeds 13 and above are the likely best bets.

Which team will score the most points in its Round 1 game?

Gonzaga leads all teams in college basketball this season with an average of 92.1 points per game — almost eight full points per game more than Baylor’s 84.4. Illinois is third among the group listed, at 81.4 points.

Which player will score the most points in his Round 1 game?

Excluding Dickinson, these are three of the top four scorers in the country in per-game average. Abmas, the Oral Roberts guard, leads the sport with 24.4 points per game. Iowa's Garza might have the best chance at a big game in terms of points, however, because he’s such a difficult matchup for Grand Canyon.

How many teams from the Big 10 conference will make it to Round 2?

The best bet here is at least five, with Michigan, Illinois, Ohio State and Iowa all ranked as top-two seeds that should get through to Round 2. Wisconsin and Rutgers are also strong in the 9-seed and 10-seed spots, respectively.

Which team will hit the most 3-point goals in its Round 1 game?

Alabama hits the most 3-pointers of any team in the tournament, with 10.7 per game. The Crimson Tide have two guys who can bomb away in John Petty Jr. and Jaden Shackelford.

Although Creighton has depth that can stand up well outside the arc, the last image hoops fans had of the Bluejays was them struggling against Georgetown in the Big East final. The Crimson Tide seem like the best bet here.

Play the FOX Super 6 Tourney Challenge all tournament long for your chance to win thousands of dollars every round! Just download the FOX Super 6 app for free and make your picks now.