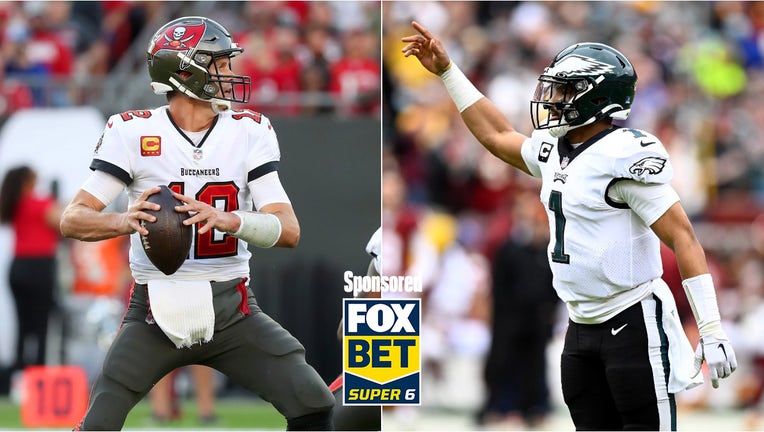 There are few things that can keep up with playoff football. Every game draws us to the television like a moth to a flame, passing the often cold winter nights with hot passion of winner-takes-all moments.

The NFL’s Super Wild Card weekend has arrived. And for sports fans, there are few better windows of action than watching six football games spread over roughly 60 hours of real-time.

For many, this is also a great weekend to get involved with a little more action on the game itself. That’s where FOX Bet comes in. Whether it is the thrill and excitement of FOX Bet Super 6 for the Eagles-Buccaneers game on Sunday afternoon (1 p.m. EST FOX) or placing a wager on the FOX Bet Sportsbook app in Michigan, Pennsylvania, New Jersey and Colorado – there are so many ways to maximize the excitement.

Let’s look at the Eagles-Buccaneers game and how you can win in multiple ways.

Can Tom Brady do it again? The 44-year-old veteran quarterback with seven rings on his fingers looks for a repeat with the Tampa Bay Buccaneers. The Bucs are the second seed in the NFC Playoffs and will start the tournament at home – under forecasted rainy and windy conditions- against Jalen Hurts and the upstart Philadelphia Eagles.

Brady and the Bucs beat the Eagles in Philadelphia on a Thursday night in October, picking on the Philly defense in the first half, then withstanding a late charge. However, this is a different Eagles team with a running game powered behind one of the best offensive lines in the game with All-Pros Jason Kelce and Lane Johnson. Miles Sanders is the wild card in this, playing his first game in nearly a month after breaking his hand.

The Eagles-Buccaneers game is the featured attraction in FOX Bet’s Super 6 app for this week. This week, there’s $100,000 of Terry Bradshaw’s money on the line for anyone who enters for the free-to-play FOX Bet Super 6 contest (after complaining about being out of money, Terry’s friend Howie Long finds an extra suitcase of cash that lifts the jackpot to that lofty number).

To win, anyone has to correctly guess the answers to six in-game questions that involve different aspects of the game, as well as picking the winner of the game by the correct amount of points.

The best part about FOX Bet Super 6 is that it’s completely free and an awful lot of fun. Just download the app on your phone or tablet device to play this contest or any number of games that are available for free every day. Over $6 million in prize money has been awarded by FOX Bet Super 6 since its debut in 2019.

The Buccaneers are 8 ½ point favorites over Philadelphia on Sunday. If you placed a $110 bet on the Bucs at that number, you would need them to win the game by nine or more points to win $100 profit.

If you think the Eagles are going to win the game outright, the better bet could be taking them on the "money line." A $100 wager on Philadelphia to win outright on the money line would pay off – as of Friday afternoon-- at +310 in winnings. The Buccaneers are -400 on the money line, meaning a $400 bet would be needed to win $100.

The over/under total on the Eagles-Bucs game was 45 ½ points. A bet on the over would need to result in the total score of the game being 46 points or over – something that a shaky weather forecast may not make easy to get.

There are also offers that could sweeten the pot for you if you bet through the FOX Bet Sportsbook – such as a chance to double your money if the Eagles score a rushing touchdown (maximum bet of $10.)

Of course, the Eagles-Buccaneers is not the only game going on. All five games on Super Wild Card Weekend-- Raiders-Bengals, Patriots-Bills, 49ers-Cowboys, Steelers-Chiefs and Cardinals-Rams-- are on the board on the FOX Bet Sportsbook app for you to pick and potentially win on. There are Super Boosts and offers that could add a little excitement to your account. Here’s to the Wild in the Wildcard Weekend!