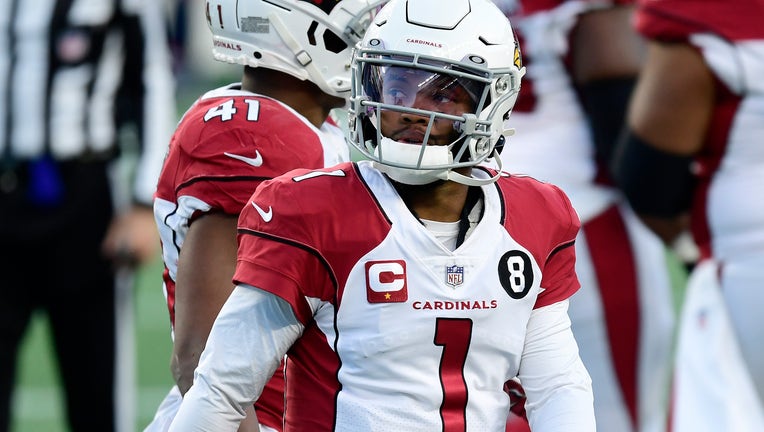 FOXBOROUGH, MASSACHUSETTS - NOVEMBER 29: Kyler Murray #1 of the Arizona Cardinals reacts after a play against the New England Patriots during the fourth quarter of the game at Gillette Stadium on November 29, 2020 in Foxborough, Massachusetts. (Photo

FOXBOROUGH, Mass. (AP) — The Patriots’ comeback started with a goal-line stand to end the first half and ended with yet another big win to keep alive their playoff hopes.

Nick Folk kicked a 50-yard field goal as time expired, and New England rallied in the second half to beat the Arizona Cardinals 20-17 Sunday.

James White rushed for two touchdowns for the Patriots (5-6). It was the second time this month that Folk hit a last-second game-winning field goal. His 51-yarder beat the New York Jets 30-27 on Nov. 9.

Cam Newton struggled, finishing 9 of 18 for 84 yards and two interceptions. But New England won the game despite finishing with 179 yards by taking advantage of mistakes by the Cardinals (6-5).

“I’d rather have an ugly win than a pretty loss,” Newton said. “We didn’t play our best game offensively. But when we needed it, we got the job done and that’s all that counts.”

The Patriots had a pivotal goal-line stand before halftime and also had a 53-yard kickoff return by Donte Moncrief — elevated from the practice squad on Saturday — to set up their first touchdown of the game.

Kenyan Drake rushed for 78 yards and two touchdowns for Arizona.

Kyler Murray finished 23 of 34 for 170 yards and an interception. Murray had 31 rushing yards and was held without a touchdown pass for the first time this season. But he said he wasn’t limited by his recent shoulder injury.

“I didn’t adjust anything,” Murray said. “I wasn’t going to play if I couldn’t be myself.”

Trailing 10-0 early, New England used a turnover in the third quarter to take its first lead of the game.

Facing third down, Murray’s pass intended for DeAndre Hopkins was deflected at the line of scrimmage by Adam Butler and intercepted by Adrian Phillips at the Arizona 31. Six plays later, White scored on a 1-yard run to make it 17-10.

“Today we really made sure that no matter what we’re gonna pressure this guy, we’re gonna bring it after him,” Phillips said of Murray. “We’re not just fixing to let him run around.”

Following a Patriots’ punt, Arizona tied it up again in the fourth quarter on a 1-yard TD run by Drake with 8:02 remaining.

A promising drive by New England was then halted when Dre Fitzpatrick intercepted Newton’s short pass intended for Damiere Byrd with 4:37 remaining.

Arizona had a chance to take the lead, but Zane Gonzalez missed wide right on 45-yard field-goal attempt with 1:47 left.

Cardinals linebacker Jordan Hicks was unblocked on a blitz and hit Newton as he threw, allowing Markus Golden to come up with the easy pick.

Arizona took over on the New England 23 and used a 19-yard pass from Murray to Andy Isabella to set up a 1-yard TD run by Drake two plays later.

The Cardinals increased their lead to 10-0 in the second quarter when facing fourth-and-2 on the 7, White found the end zone on an option pitch from Newton.

Arizona appeared to extend its lead just before halftime on an 8-yard touchdown pass from Murray to KeeSean Johnson. But a review showed Johnson’s knee was down before he crossed the goal line.

The Cardinals went for it on fourth-and-1, but Drake’s run was stopped short by Akeem Spence and Ja’Whaun Bentley as time expired.

“It’s an unfortunate turn of events,” Murray said. “Obviously we get points right there, we put ourselves in a better situation. I didn’t see anything wrong with the play call. We just didn’t execute.”

Gunner Olszewski appeared to give the Patriots the lead early in the third quarter when he fielded Andy Lee’s short punt and returned it 82 yards for a touchdown. The score was nullified, though, after rookie Anfernee Jennings was called for an illegal blindside block.

New England drove to the Arizona 4 after the penalty, but had to settle for Folk’s 22-yard field goal to tie the game at 10.

The Cardinals host the Los Angeles Rams next Sunday.

The Patriots visit the Chargers on Sunday for their first of two consecutive games in Los Angeles.