The FIFA World Cup is the biggest men's soccer tournament in the world. Here's a look at the eight countries that have won the World Cup since the tournament was first held in 1930.

AUSTIN, Texas - The U.S. Men’s National Soccer Team returns to action Thursday, hoping that it looks more like the team that dominated Honduras last month and less like the squad that struggled against El Salvador and Canada.

The Stars and Stripes will take on Jamaica at 7:30 p.m. at Q2 Stadium. The match kicks off the latest round of World Cup qualifiers for CONCACAF counties.

If the World Cup ended today, the Yanks would be in — holding a coveted top-three spot in the group’s table. Mexico leads the group with seven points. The Canadians and Americans each have five points, but Canada claims the No. 2 spot due to tiebreakers.

This path to the World Cup is meant to be a redemption of sorts after the Americans failed to qualify for the 2018 tournament. But the Yanks appeared to be flirting with another humiliation last month when the first two qualifiers against El Salvador and Canada ended in draws.

And they trailed Honduras 1-0 at halftime of their most recent qualifier. But in the second half, they found their rhythm and topped Honduras 4-1,  looking more like the team that won two CONCACAF tournaments this summer.

The last round of qualifiers came at a cost. Gio Reyna was injured in the El Salvador match while Christian Pulisic got hurt against Honduras.

Neither player is joining the squad for this month’s international games. John Brooks will also miss action this month, as will goalkeeper Zack Steffen and defender Antonee Robinson.

The Yanks will, however, get a boost from Weston McKinnie — who is returning to the squad after being dismissed last month for violating COVID-19 protocols.

This American squad is no stranger to performing without its top players. This summer, the Yanks won the Gold Cup with a roster notably absent of its best players.

And that short-handed team topped Jamaica 1-0 in the Gold Cup’s quarterfinal round. Jamaica will also be shorthanded Thursday night —  playing without top forward Michail Antonio. 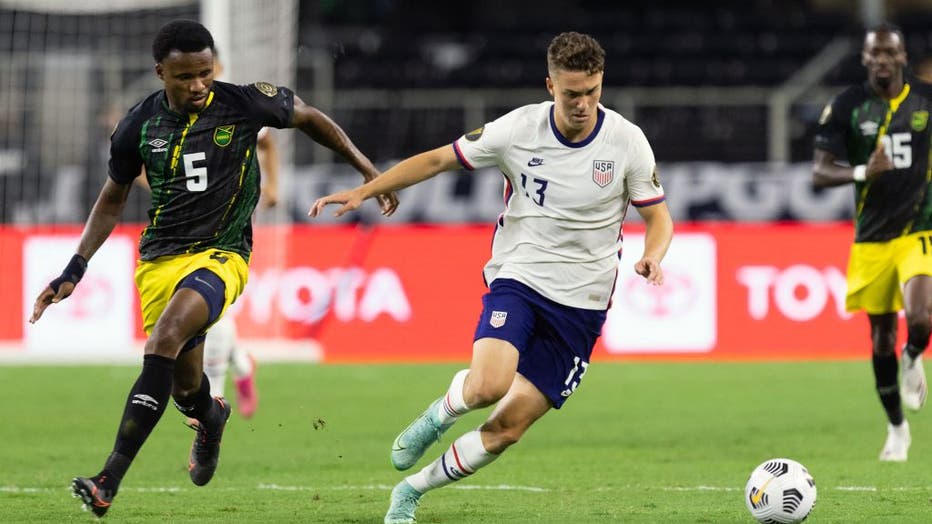 Jamaica's defender Alvas Powell (L) vies for the ball with USA's forward Matthew Hoppe (C) during the Concacaf Gold Cup quarterfinal football match between USA and Jamaica at the AT&T stadium in Arlington, Texas on July 25, 2021. (Photo by ANDY J

The English Premier League named Antonio its player of the month in August. But Jamaica learned Tuesday the West Ham star failed to travel.

Jamaica will have only dress 20 players Thursday — including three goalkeepers — from the 23 selected, three shy of the total allowed to suit up. And the Jamaicans sit at the bottom of the qualifying table with just one point on a draw and two losses.