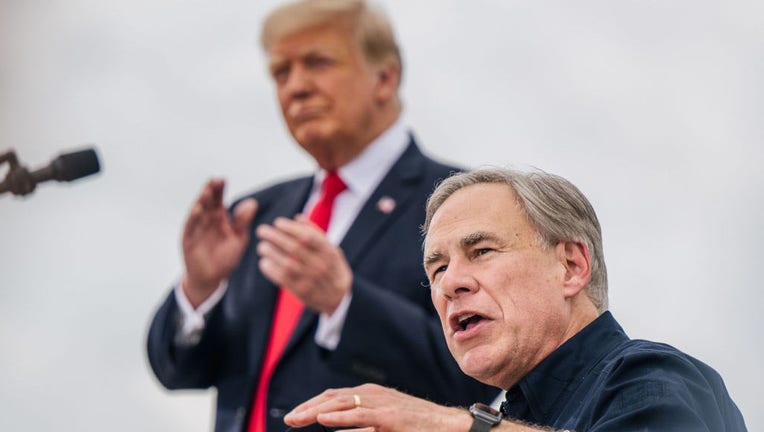 FILE IMAGE - Texas Gov. Greg Abbott speaks alongside former President Donald Trump during a tour of an unfinished section of the border wall on June 30, 2021, in Pharr, Texas. (Photo by Brandon Bell/Getty Images)

HOUSTON - The National Rifle Association’s annual convention was set to begin this week in Texas, just days after an 18-year-old gunman killed 19 children and two adults at an elementary school in the state.

Texas Gov. Greg Abbott and former President Donald Trump were among the slate of scheduled speakers at a Friday leadership forum sponsored by the NRA’s lobbying arm. The leadership forum is described as "one of the most politically significant and popular events in the country, featuring our nation's top Second Amendment leaders in government, the media, and the entertainment industry."

Both of Texas’ U.S. senators, Ted Cruz and John Cornyn, were also slated to speak, though a representative from Cornyn’s office told KXAS-TV that he would no longer be speaking "due to an unexpected change in his schedule" prior to the shooting and would be in Washington, D.C. for personal reasons.

The offices of Cornyn, Abbott, and Cruz did not immediately respond to a request for comment.

The attack at Robb Elementary School, located in the heavily Latino town of Uvalde, was the deadliest shooting at a U.S. school since a gunman killed 20 children and six adults at Sandy Hook Elementary in Newtown, Connecticut, in December 2012.

During an impassioned speech on the Senate floor Tuesday, Murphy said hearts in his state where 26 school children and educators were killed a decade ago are breaking for the families in Texas.

The 18-year-old gunman who slaughtered young students and two teachers barricaded himself inside a single classroom and "began shooting anyone that was in his way," authorities said Wednesday. Law enforcement officers eventually broke into the classroom and killed the gunman.

Houston's Democratic mayor, Sylvester Turner, acknowledged that some people were calling for the city to cancel the NRA meeting, but said they can’t break the contract.

The greater question, he said, was why politicians still planned to speak there after the shooting.

"So, it’s not about us canceling the convention," Turner said. "It’s about elected officials at the highest level in our state going and speaking and endorsing those policies and that’s wrong. And you can’t pray and send condolences on one day and then be going and championing guns on the next. That’s wrong."

In a post Wednesday on his social media platform, Trump confirmed he still planned to speak.

He said he’ll "deliver an important address to America" at the convention, saying "America needs real solutions and real leadership in this moment, not politicians and partisanship."

Earlier in the day, Parkland shooting survivor and activist David Hogg called for the NRA to cancel its upcoming meeting in the wake of the Uvalde school shooting.

"@NRA cancel your convention coming up in Texas and donate the money to the victims families," Hogg wrote on Twitter.

Tuesday’s shooting was the latest in a seemingly unending string of mass killings at churches, schools, stores and other sites in the United States. Just 10 days earlier, 10 Black people were shot to death in a racist rampage at a Buffalo, New York, supermarket.

Some anger and attention have often turned to groups like the NRA, one of the most powerful gun-rights lobbies in the U.S. The group’s annual meeting, which is scheduled to run Friday through Sunday, is just about 300 miles away from the latest attack in Uvalde.

On the Leadership Forum event’s page, it notes how NRA members will not be able to bring their firearms to the event.

"With the announcement that President Donald J. Trump will be speaking at the Forum, the U.S. Secret Service will take control of the General Assembly Hall and have magnetometers in place before entry. You will be subject to a search of your person and belongings," the page states.

"Per the U.S. SECRET SERVICE, firearms, firearm accessories, knives, and other items WILL NOT BE PERMITTED in the General Assembly Hall," it adds.

The NRA was founded in 1871 to defend the U.S. right to keep and bear arms, including rifles and shotguns for hunting, sport, and self-defense, and handguns for sport and personal protection.

In the years since the Sandy Hook shooting, the gun control debate in Congress has waxed and waned. Efforts by lawmakers to change U.S. gun policies in any significant way have consistently faced roadblocks from Republicans and the influence of outside groups such as the NRA.

Golden State Warriors coach Steve Kerr stormed out of his pregame news conference in Dallas after discussing the need for gun control legislation in the wake of another school shooting.

A year after Sandy Hook, Sens. Joe Manchin, a West Virginia Democrat, and Patrick J. Toomey, a Pennsylvania Republican, negotiated a bipartisan proposal to expand the nation’s background check system. But the measure failed in a Senate vote, without enough support to clear a 60-vote filibuster hurdle.

Last year, the House passed two bills to expand background checks on firearms purchases. One bill would have closed a loophole for private and online sales. The other would have extended the background check review period. Both languished in the 50-50 Senate, where Democrats need at least 10 Republican votes to overcome objections from a filibuster.