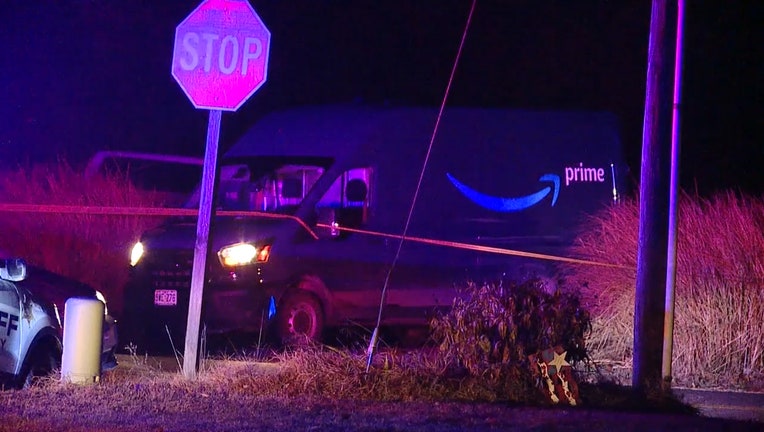 The Amazon delivery vehicle is pictured at the scene on Oct. 24, 2022, in Excelsior Springs, Missouri. (Credit: WDAF-TV)

EXCELSIOR SPRINGS, Mo. - Authorities in rural northwest Missouri are investigating the death of an Amazon driver whose body was found in a yard of a home with injuries consistent with an animal attack.

Deputies were called on Monday evening to a home in Excelsior Springs after reports that an Amazon truck had been parked in the same spot for about two hours, with its lights on and motor running.

The driver's body was found in the yard in front of the home, Ray County Sheriff Scott Childers said. His name has not been released.

Childers said the man had injuries consistent with canine bites and two "aggressive" dogs — a German Shepherd and English Mastiff — were at the home. However, an autopsy will be conducted to determine if the dogs caused the driver's death, he said.

"We’re not saying the dogs were the cause of death. We don’t know that yet. We do know that they were aggressive though," Childers told FOX 4 in Kansas City.

At the time, the homeowners were out of town but the dogs were being cared for, the sheriff said.

An Amazon delivery driver came to the rescue of a 19-year-old and her dog as the two were being attacked by a larger dog in Las Vegas, Nevada, on Dec. 13. (Credit: Michael Ray via Storyful)

A responding deputy shot and injured the mastiff because it was aggressive toward sheriff's deputies and medical responders on the scene, Childers said. The dogs then went back into the house, but the deputies could hear them barking and saw blood on the doggie door.

Childers said he and deputies then went into the home and shot and killed the dogs in order to protect deputies, medical personnel, and detectives at the scene.

Amazon said in a statement that it was "deeply saddened" by the driver's death and is helping law enforcement with the investigation.

Excelsior Springs is about 30 miles northeast of Kansas City.