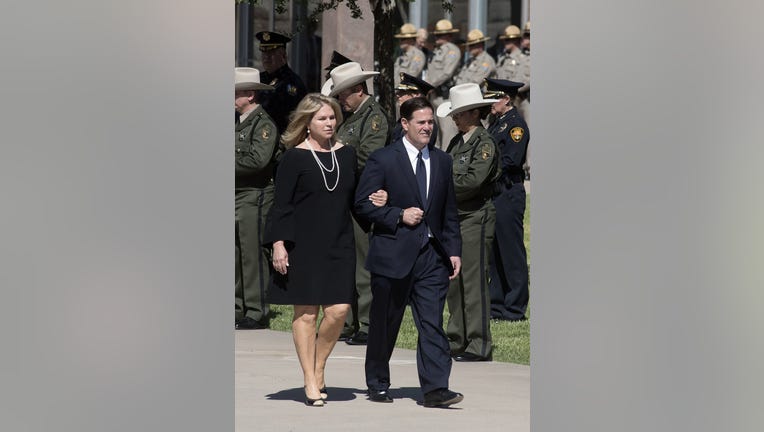 Arizona Governor Doug Ducey (R) and his wife First Lady Angela Ducey walk to greet the motorcade and hearse as it arrives with the late US Senator John McCain at the Arizona State Capitol in Phoenix, Arizona on August 29, 2018. (Photo by Laura Segall

PHOENIX - Arizona Gov. Doug Ducey and his wife are headed to Europe for a vacation timed to celebrate the couple’s 31st wedding anniversary.

Ducey and his wife, Angela, left on Nov. 1 and will be out of the country for nearly two weeks, spokesman C.J. Karamargin said.

The trip is purely personal, and the Republican governor has no plans for official visits in any of the several countries the couple plan to visit, Karamargin said. A security detail from the Arizona Department of Public Safety will accompany them.

Ducey will remain in touch with his staff while he is out of the country, Karamargin said. Democratic Secretary of State Katie Hobbs serves as acting governor when Ducey is out of state.

The couple met while both attended Arizona State University and have three sons.