Gallego said he’d fight for normal people struggling to make ends meet and losing faith in politicians. He said he and Sinema both come from "modest to poor means" but have taken different paths in Congress.

Gallego, a 43-year-old military veteran first elected to Congress in 2014, had made no secret of his interest in challenging Sinema, a longtime rival in Arizona politics who has been a roadblock and irritant to Democrats during Joe Biden’s presidency. She left the Democratic Party in December, registering as an independent and saying she doesn’t "fit well into a traditional party system." She has not said whether she plans to run for a second term.

A three-way race, coupled with the risk that Sinema and the eventual Democratic nominee will split the vote, would complicate the party’s already uphill battle to maintain control of the Senate in 2024. Democrats will be forced to defend 23 seats, including Sinema’s and two others held by independents, compared with just 10 seats for Republicans.

With tough and expensive races on the horizon, it remains unclear just how firmly the Democratic establishment and major donors will line up against Sinema, who has voted for most Democratic legislation even as she’s stood in the way of major priorities for the White House, congressional leaders and the progressive movement.

A spokeswoman for Sinema, Hannah Hurley, did not immediately comment on Gallego’s announcement. 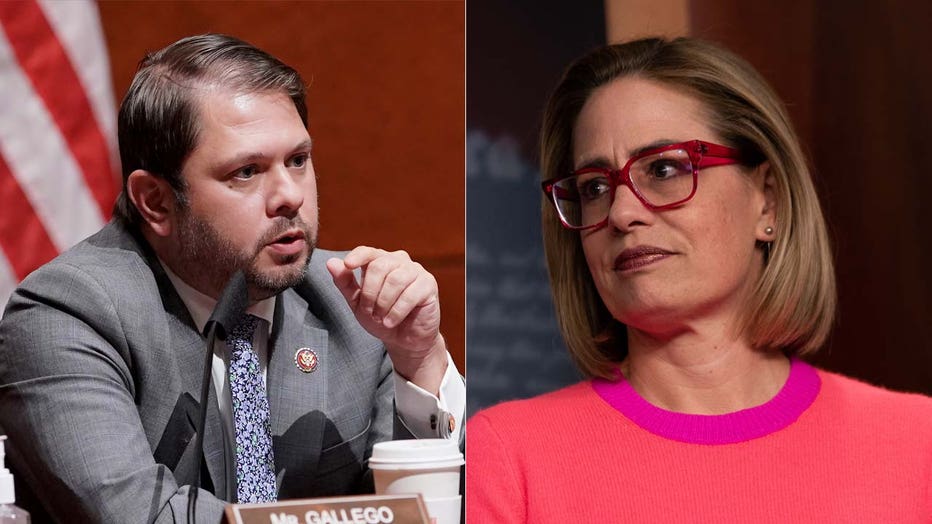 Gallego, an acerbic presence on social media who is quick to take down rivals from both parties, floated the idea of challenging Sinema to raise money last year and has for weeks been publicly assembling a team of advisers, hiring Democratic campaign veterans with experience working on tough swing-state Senate races in Arizona, Georgia and Pennsylvania.

He announced his campaign with an online video that shows him talking to veterans at an American Legion post in Guadalupe, a Latino and indigenous community just outside Phoenix.

The son of immigrants from Mexico and Colombia, Gallego was raised in Chicago by a single mother, after his father was imprisoned for dealing drugs. He enlisted in the U.S. Marine Reserves while he was on an involuntary break from Harvard University. He wrote in a 2021 book, "They Called Us Lucky," that he was asked to leave Harvard during his sophomore year, when he partied too much, his grades slipped and he broke unspecified rules. He was later allowed to return.

He fought in Iraq in 2005 in a unit that sustained heavy casualties, and he struggled with post-traumatic stress disorder after returning. He moved to Arizona to join his Harvard girlfriend, who had become active in Democratic politics in the state. The couple married in 2010 and divorced in 2017, a month before their son was born. His ex-wife, Kate Gallego, is now the mayor of Phoenix.

Gallego was elected in 2010 to the state Legislature, where Sinema also served for one of his two terms. In 2014, he won a bitter congressional primary, toppling a dynastic figure in the Phoenix Latino community. He represents an overwhelmingly Democratic district that includes the Black and Latino neighborhoods of south and west Phoenix.

In Congress, he has focused on veterans and military issues.

Sinema has modeled her political approach on the maverick style of the late Republican Sen. John McCain of Arizona, who alienated the grassroots of his party by sometimes crossing the aisle to work with Democrats. She’s become a fierce advocate of bipartisan compromise in an era when extreme partisanship has made it much more difficult.

She has been at the center of many of the biggest congressional deals of Biden’s presidency, from a big, bipartisan infrastructure package to a landmark bill to legally protect same-sex marriages. But she’s also become estranged from many Democrats, who blame her for voting down progressive priorities like a minimum wage hike and watering down others, like Biden’s big social spending initiatives.

Her support for maintaining the filibuster, a Senate rule requiring 60 of 100 votes to pass most legislation, has made her a pariah on the left.