PHOENIX - Most Americans prefer politicians who work across the aisle, Democratic Sen. Kyrsten Sinema said Monday in a forceful defense of her brand of bipartisanship, which has infuriated the left and is likely to draw her a primary challenge.

Members of Congress face "intense pressure" to play to the extreme elements of their own party, alienating the American people from their government, Sinema argued in a speech in Kentucky, where she spoke at a University of Louisville center named for Republican Senate Minority Leader Mitch McConnell. Both parties are responsible, she said.

"More and more it seems like Americans are being told that in order to be a member of either political party, you must adhere to a strict set list of policy viewpoints," Sinema said. "But I don’t think that’s how a majority of Arizonans or Kentuckians or everyday Americans think."

Sinema plays an outsized role in defining what’s possible in Congress. One of two moderate Democrats in the 50-50 Senate, her willingness to buck the rest of her party has limited the ambitions of President Joe Biden and Senate Majority Leader Chuck Schumer, D-N.Y.

She is a staunch defender of the filibuster, a Senate rule effectively requiring 60 votes to pass most legislation in the 100-member body. Many Democrats, including Biden, say the filibuster leads to gridlock by giving a minority of lawmakers the ability to veto.

She said the filibuster should be restored for areas where it’s been eliminated, such as judicial confirmations.

"Those of you who are parents in the room know, the best thing you can do for your child is not give them everything they want," Sinema said. "And that’s important to the United States Senate as well. We shouldn’t get everything we want in the moment. Because later, upon cooler reflection, you recognize that has probably gone too far." 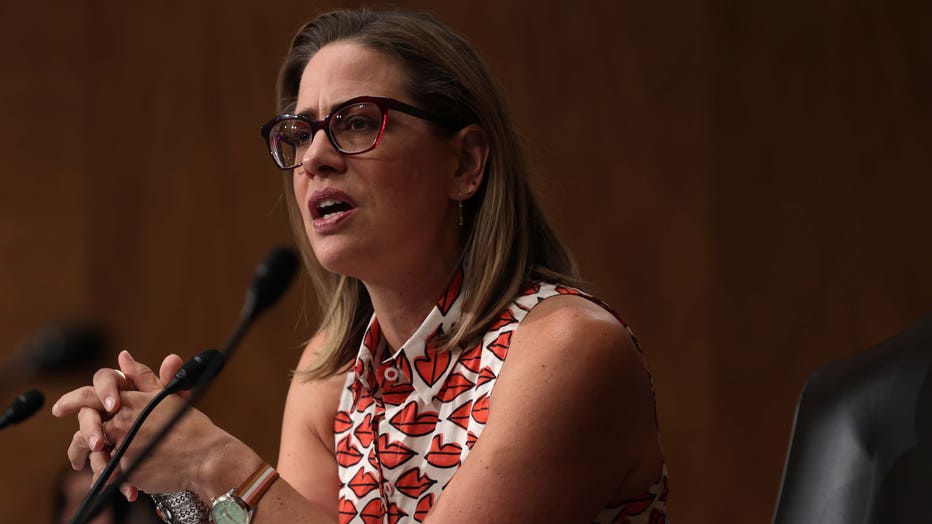 The Senate is meant to be slow and deliberative, she said, and the filibuster ensures lasting progress that doesn’t swing wildly as the parties trade off control of Congress.

Sinema pointed to a series of bipartisan compromises that produced a massive infrastructure spending bill, subsidies for semiconductor manufacturers and the widest-ranging gun control bill in decades following the shooting at a school in Uvalde, Texas.

She signaled no plans to change her approach as she nears her first reelection campaign in 2024, when she is likely to face stiff opposition from the left. Liberal groups are already raising money to fund an eventual Democratic primary challenger.

"If you don’t fit in in today’s Washington, trust me, they want to kick you out," Sinema said. "But I’ve never really wanted to fit in. Not in Washington and not anywhere else."

McConnell showered praise on Sinema’s deal-making prowess and her steadfast commitment to maintaining the filibuster.

"She is, in my view, one of the most effective first-term senators I’ve seen in my time in the Senate," McConnell said. "She is today what we have too few of in the Democratic Party — a genuine moderate and a dealmaker."