Arizona’s Republican state House Speaker Rusty Bowers, who testified Tuesday in person before the congressional committee investigating the Jan. 6, 2021, insurrection, spoke about phone calls from Trump and his allies asking him to decertify Arizona’s legitimate electors and replace them. Bowers said he repeatedly asked Trump’s attorneys to show evidence of widespread fraud, but they never provided any.

There was no legal pathway to execute such a request, Bowers said he told them, adding that he wouldn’t do anything illegal for Trump. "You are asking me to do something against my oath, and I will not break my oath," Bowers said he responded.

Bowers told stories of people outside his house on loudspeakers and one man with a gun who verbally threatened his neighbor. He teared up as he spoke of his daughter, who he said was "gravely ill," and his wife becoming upset as people swarmed outside.

Bowers spoke to The Associated Press after he arrived in Washington on Monday afternoon. He was questioned Tuesday about a phone call he got from Trump and attorney Rudy Giuliani in the weeks after the November 2020 election where Giuliani floated a proposal to replace Arizona’s Biden electors by having the state’s Legislature instead choose those committed to voting for Trump.

Bowers refused, saying the scheme was illegal and unconstitutional. In an interview last year, he said he told the president he would not break the law to help him gain the presidency.

He revealed a second call from Trump on Monday, saying the president phoned again on Dec. 4, 2020, but did not pressure him. He said Trump mainly made small talk, asking about his family and the upcoming holidays.

The secretary of state is charged with writing rules used by election officials in Arizona’s 15 counties every two years. Once that is done, she submits it to the attorney general and governor to review and approve the document.

"But then he said, ‘I want to call you to tell you that I remember what you said the first time.’" Bowers said. "And I’m presuming it was about when I told him I wouldn’t. That I supported him, I walked for him, I campaigned with him. But I wouldn’t do anything illegal for him."

Bowers said efforts by Trump’s backers have harmed the nation, undercut trust in elections and the right of people to vote their conscience.

"I just think it is horrendous. It’s terrible," Bowers said. "The result of throwing the pebble in the pond, the reverberations across the pond, have, I think, been very destructive."

Bowers said he has not watched the committee’s hearings, but did see some of the video clips showing the rampage at the Capitol. He said it sickened him watching people who supported Trump attacking police, including a man who had protested at the Arizona Capitol.

"I’m appalled at what I saw," Bowers said, "I don’t mind their having these hearings. I don’t mind. I think it illuminates something we need to see big time, and take stock of ourselves. And I hope it would sober us."

Bowers was one of five recipients of this year’s John F. Kennedy Profile in Courage award for his refusal to consider overturning the 2020 election results despite pressure from Trump and his supporters.

But while Bowers said the efforts by Giuliani and other Trump backers have been hurtful, he does not levy any criticism on Trump directly and would support him if he were on the ballot.

"If he is the nominee, if he was up against Biden, I’d vote for him again," Bowers said. "Simply because what he did the first time, before COVID, was so good for the county. In my view it was great." 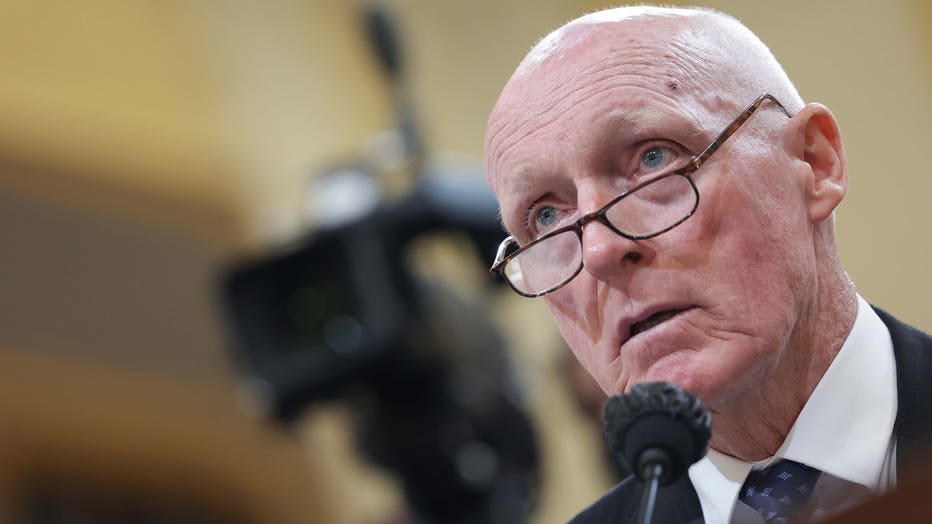 During the hearing, Rusty Bowers spoke about phone calls from Trump and his allies asking him to decertify Arizona’s legitimate electors and replace them. FOX 10's Steve Nielsen reports.