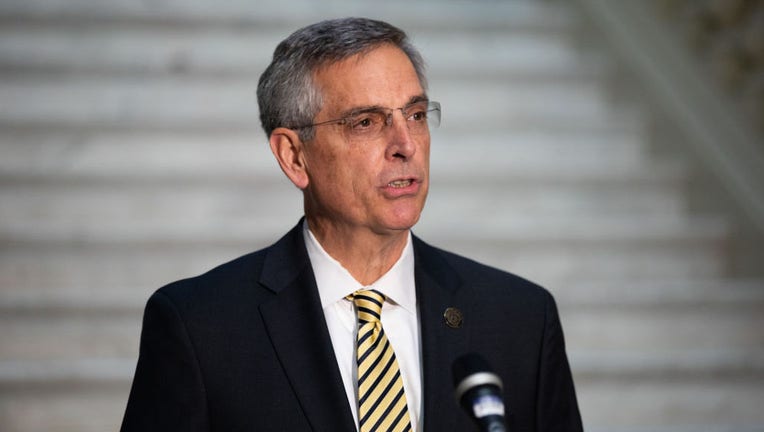 WASHINGTON - The House 1/6 committee heard chilling, tearful testimony Tuesday that Donald Trump's relentless pressure to overturn the 2020 presidential election provoked widespread threats to the "backbone of our democracy"— election workers and local officials who fended off the defeated president’s demands despite personal risks.

The panel investigating the Jan. 6, 2021, attack at the U.S. Capitol focused on Trump’s efforts to undo Joe Biden’s victory in a most local way — by leaning on officials in key battleground states to reject ballots outright or to submit alternative electors for the final tally in Congress.

The pressure, described as potentially illegal, was fueled by the president’s false claims of voter fraud which, the panel says, led directly to the deadly insurrection at the Capitol.

"A handful of election officials in several key states stood between Donald Trump and the upending of American democracy," Chairman Bennie Thompson said, praising them as heroes and the "backbone of our democracy."

The hearing was punctuated throughout with accounts of the personal attacks faced by state and local officials.

Arizona Republican House Speaker Rusty Bowers said he was subjected to a public smear campaign, including relentless bull-horn protests at his home and a pistol-wielding man taunting his family and neighbors.

Officials in Michigan, Pennsylvania and other states told similar stories of having their cellphone numbers and home addresses spread publicly after they refused Trump’s demands.

At one gripping moment, two Georgia election workers, a mother and daughter, testified that they lived in fear of saying their names aloud after Trump wrongly accused them of voter fraud.

"There were a lot of threats wishing death upon me," said Wandrea ArShaye "Shaye" Moss, a former state election worker.

The public hearing, the fourth by the panel this month, stemmed from its yearlong investigation into Trump’s unprecedented attempt to remain in power, a sprawling scheme that the chairman of the Jan. 6 committee has likened to an "attempted coup." The panel insisted that Trump's lies over the election threaten democracy to this day, as local officials face ongoing threats and challengers try to take over their jobs.

The committee's vice chair, Republican Rep. Liz Cheney, implored Americans to pay attention to the evidence being presented, declaring, "Donald Trump didn’t care about the threats of violence. He did not condemn them, he made no effort to stop them."

"We cannot let America become a nation of conspiracy theories and thug violence," she said.

Other key witnesses included Republican Georgia Secretary of State Brad Raffensperger, who testified about Trump’s phone call asking him to "find 11,780" votes that could flip his state to prevent Biden’s election victory, and his deputy Gabe Sterling, who became a notable figure during Georgia's long recount in 2020 when he urged Trump to tone down the rhetoric.

While the committee cannot charge Trump with any crimes, the Justice Department is watching the panel’s work closely.

Trump defended himself on social media, describing his phone call to Raffensperger as "perfect," similar to the way he described his 2020 call with Ukraine President Volodomyr Zelenskyy that resulted in his first impeachment.

The public testimony from Raffensperger came weeks after he appeared before a special grand jury in Georgia investigating whether Trump and others illegally tried to intervene in the state’s 2020 election, and after Raffensperger beat a Trump-backed challenger in last month’s primary election.

He and Sterling, his chief operations officer, detailed their painstaking efforts to count the Georgia vote, investigating one false claim after another of fraud. After a hand recount of 5 million ballots, Biden's victory was unchanged.

"The numbers don't lie," said Raffensperger, who said that some 28,000 Georgia voters simply bypassed the presidential race but voted down ballot for others. "At the end of the day, President Trump came up short."

Bowers, the Arizona House speaker, walked through what started with a Trump phone call on a Sunday after he returned from church. The defeated president laid out his proposal to have the state replace its electors for Biden with others favoring Trump.

"I said, ‘Look, you’re asking me to do something that is counter to my oath,’" Bowers testified.

Bowers insisted on seeing Trump’s evidence of voter fraud, which he said Trump’s team never produced beyond vague allegations. He recalled Trump lawyer Rudy Giuliani at one point told him, "‘We’ve got lots of theories, we just don’t have the evidence.’"

Trump wanted Bowers to hold a hearing at the state Capitol, but the Republican leader said there was already a "circus" atmosphere over the election. The panel showed video footage of protesters at the Arizona statehouse including a key figure, the horned hat-wearing Jacob Chansley, who was later arrested at the Jan. 6, 2021 Capitol riot.

Trump nevertheless pressed the Arizona official, including in a follow-up call, suggesting he expected a better response from a fellow Republican.

But Bowers said that because of his faith, including a belief the U.S. Constitution is divinely inspired, what the president was asking him to do was "foreign to my very being."

RELATED: The moments resonating from the Jan. 6 hearings (so far)

In in-person testimony, Moss, who had worked for Atlanta's Fulton County elections department since 2012, and her mother, Ruby Freeman, a temporary election worker who spoke earlier to the panel, gripped the audience with their accounts of the fallout from the smear campaign by Trump and Giuliani.

The select committee worked to untangle the elaborate "fake electors" scheme that sought to have representatives in as many as seven battlegrounds — Arizona, Georgia, Michigan, Pennsylvania, Wisconsin, Nevada and New Mexico — sign certificates stating that Trump, not Biden, had won their states.

The committee showed a text message sent from an aide to Sen. Ron Johnson, R-Wis., to an aide for Vice President Mike Pence the morning of Jan. 6 saying Johnson wanted to give Pence an "alternate slate of electors for MI and WI."

"Do not give that to him," Pence aide Chris Hodgson replied. And Johnson didn't, a spokeswoman said Tuesday.

Conservative law professor John Eastman, a lawyer for Trump, pushed the fake electors in the weeks after the election. Trump and Eastman convened hundreds of electors on a call on Jan. 2, 2021, encouraging them to send alternative slates from their states where Trump’s team was claiming fraud.

The fake electors idea was designed to set up a challenge on Jan. 6, 2021, when Congress met in joint session, with Vice President Pence presiding in what is typically a ceremonial role to accept the states' vote tallies. But the effort collapsed, as Pence refused Trump’s repeated demands that he simply halt the certification of Biden’s win — a power he believed he did not possess in his role.

That's the certification the Capitol mob tried to stop.

At least 20 people in connection with the fake electors scheme were subpoenaed by the House panel. The committee says it will show that it has gathered enough evidence through its more than 1,000 interviews and tens of thousands of documents to connect the varying efforts to overturn the election directly to Trump.

What’s next after Tuesday’s fourth hearing?

The committee has two additional hearings scheduled this month, and more are expected. Additional hearings will look at Trump’s pressure on the Justice Department to declare the election "corrupt" and on what was happening inside the White House as the violence unfolded.

After the hearings, the investigation will continue. The panel expects to issue final reports by the end of the year. Investigators still haven’t said whether they will try to call Pence or Trump to testify, either privately or publicly.

What we’ve learned from the first three hearings

In its first three hearings, the House panel investigating the Capitol insurrection has laid out the beginnings of its case against former President Donald Trump — that his lies about the 2020 election, and his pressure on his vice president to overturn it, directly led to the violence on Jan. 6, 2021.

The committee’s June hearings come after a yearlong probe and over 1,000 interviews. In laying out their initial findings, panel members say they are trying to remind the public of what was at stake that day and what could have happened if Vice President Mike Pence and others had not rebuffed Trump’s efforts to overturn his defeat.

Members of the House committee investigating the Capitol riot said Sunday they may subpoena Pence and are waiting to hear from Virginia "Ginni" Thomas, the wife of Supreme Court Justice Clarence Thomas, about her role in the illegal plot to overturn the 2020 presidential election.

Thomas has publicly indicated that she "can’t wait" to appear before the committee after receiving their request by letter last week.

January 6 Committee Chairman Rep. Bennie Thompson opened the third hearing by citing Pence's own words that there is "almost no idea more un-American" than the one he was being asked to do — reject the vote — in remarks on June 16, 2022.

The committee’s hearing last week focused on Trump’s pressure on Pence after all 50 states certified President Joe Biden’s win and courts across the country had rejected his campaign’s attempts to legally challenge the results. As the president ran out of options, he and a small group of allies turned toward the final congressional certification on Jan. 6.

Pence presides over that session every four years in a ceremonial role. Prodded by a constitutional law professor named John Eastman, Trump pressured Pence to defy the law, and hundreds of years of precedent, by stepping in to object to or delay the count.

There was a gasp in the hearing room last week when committee member Liz Cheney read an account from inside the White House. When Trump was told the Capitol mob was chanting for Pence to be hanged for refusing to block the election results. Trump responded that maybe the mob was right, that he "deserves it," Cheney said.

The committee has been able to document most of Trump’s end of his call to Pence on the morning of the insurrection on Jan. 6, 2021, when the then-president made his final plea for Pence to stop the certification of Joe Biden’s victory when Pence presided over the Electoral College count in Congress. Members have not yet documented directly what Pence said in response.

The centerpiece of last week’s hearing was a video reconstruction of the attack on the Capitol. Over 10 minutes, it went point by point, showing the rioters overwhelming and beating police officers as the mob broke into the building to stop the certification of Donald Trump’s election loss.

The video had a powerful impact inside the hearing room and among Democrats. Police officers in the audience consoled one another as they relived the violence. U.S. Capitol Police officer Harry Dunn teared up during the footage of rioters hitting his colleagues with flagpoles and baseball bats.

FOX 5 Atlanta along with Associated Press writers Mary Clare Jalonick in Washington and Bob Christie in Phoenix contributed to this report.