The new demands come days after Trump spoke to thousands of supporters in downtown Phoenix, using the Senate’s review to make a number of debunked claims to bolster his false narrative that President Joe Biden’s victory was illegitimate.

PHOENIX - Two top Republicans in the Arizona Senate issued two new subpoenas late July 26 for materials from the 2020 election as they look to continue their unprecedented review of former President Donald Trump’s loss in Maricopa County.

The subpoenas issued by Senate President Karen Fann and Judiciary Committee Chairman Warren Petersen set up a new confrontation with the Republican leaders of Maricopa County, who have vowed to stop producing materials for the Senate’s review. They say the review is being run by incompetent grifters, and they’ve already provided everything needed to review the 2020 vote count.

Fann and Petersen also, for the first time, sent a subpoena to Dominion Voting Systems Inc., which manufactured Maricopa County’s voting machines and has been the target of false conspiracy theories suggesting its machines were tainted by foreign interference.

The new demands come days after Trump spoke to thousands of supporters in downtown Phoenix, using the Senate’s review to make a number of debunked claims to bolster his false narrative that President Joe Biden’s victory was illegitimate.

Fann first issued a subpoena late last year as Trump and his allies were looking for materials to support their false claims of election irregularities before President Joe Biden’s victory was formally certified on Jan. 6. The subpoena was reissued early this year, and after a judge ruled it was valid, Maricopa County turned over 2.1 million ballots, hundreds of counting machines and terabytes worth of data.

The materials were given to contractors hired by Fann for a sweeping audit of the election, which Trump narrowly lost.

Fann says her goal is not to overturn the 2020 election but to see whether changes to state law are needed going forward. But the audit is being led by an inexperienced firm, Cyber Ninjas, led by a Trump supporter who has promoted conspiracy theories about the election. It’s become an obsession for many Trump supporters who hope it will turn up evidence supporting claims of fraud. 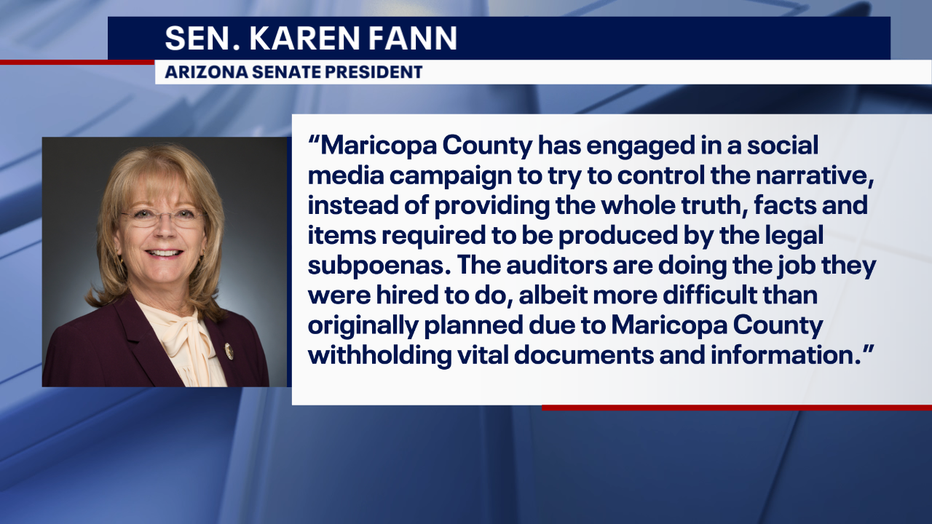 The latest subpoena demands that the county turn over the envelopes from all mail-in ballots or images of them, network routers and traffic logs, detailed voter registration records with change histories, and records related security breaches of election systems.

Fann and Petersen are also demanding that Dominion give their contractors administrator-level access to all tabulators used in Maricopa County.

The auditors have fought for months to get ahold of security tokens needed to access internal configurations of precinct-based tabulators. Dominion has refused to provide that access, saying it will only cooperate with companies certified by the U.S. Election Assistance Commission.

"Releasing Dominion’s intellectual property to an unaccredited, biased, and plainly unreliable actor such as Cyber Ninjas would be reckless, causing irreparable damage to the commercial interests of the company and the election security interests of the country," said a statement from the company issued in May. "No company should be compelled to participate in such an irresponsible act."

Dominion did cooperate with two accredited firms hired by the county earlier this year, both of which found no problems with the election.

Fields Moseley, a spokesman for the Maricopa County Board of Supervisors, said the board will review the subpoena with its lawyers and respond in the coming days. He said the county "has already provided everything competent auditors would need to confirm the accuracy and security of the 2020 election."

The new subpoenas are not likely to resolve the impasse, and the Senate may struggle to enforce them. Fann does not have the power on her own to hold county officials in contempt if they ignore the demand for documents. The Senate is not in session, and Fann lacks the 16 votes she’d need to hold officials in contempt, which would open the door for their arrest.

Republican Sen. Paul Boyer, who along with all Democrats voted against holding county officials in contempt earlier this year, has not backed down. He’s called the Senate’s contractors inexperienced and partisan, and he said the audit has become an embarrassment for the Republican Party.

And Republican Sen. Michelle Ugenti-Rita on Saturday said she can no-longer support "the Trump audit."

"I wanted to review our election processes and see what, if anything, could be improved," Ugenti-Rita wrote on Twitter. "Sadly, it’s now become clear that the audit has been botched."