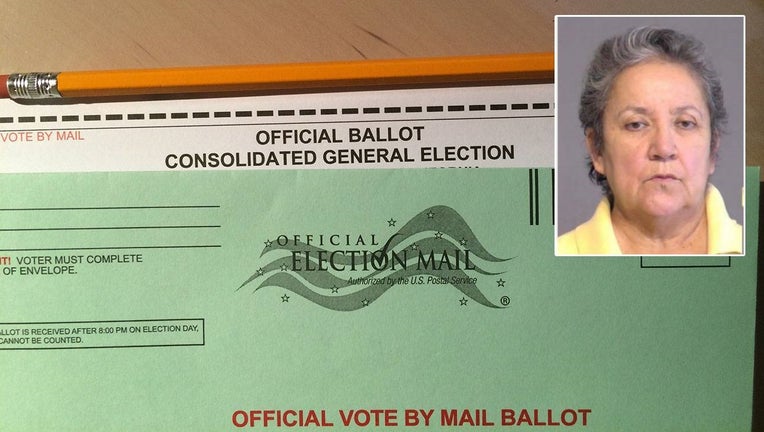 The Arizona attorney general’s office announced on Oct. 5, 2021 that Guillermina Fuentes was indicted for voting another person’s early ballot in the August 2020 primary election. She was charged with conspiracy, forgery and a ballot abuse count.

PHOENIX (AP) - A parade of character witnesses provided a judge Thursday with glowing reports about a southern Arizona woman who admitted collecting four early voting ballots in the 2020 primary election, as her lawyer seeks leniency and prosecutors urge him to send her to prison for a year.

Testimony in Yuma County Superior Court painted a picture of Guillermina Fuentes as filled with remorse and a pillar of small border community of San Luis. The 66-year-old mother and grandmother, witnesses said, has spent her life helping others while raising her children, caring for her aging mother and building a business.

Prison or jail time, they said, would hurt the community and serve no purpose.

Fuentes is a school board member and former mayor in San Luis who has pleaded guilty to a felony violation of Arizona’s "ballot harvesting" law, which bars anyone but a person’s relative, housemate or caregiver from returning ballots for them. Her codefendant, Alma Juarez, pleaded guilty to the same charge, but it was designated as a misdemeanor after she agreed to cooperate with prosecutors.

Her agreement calls for a sentence of probation. She carried four ballots Fuentes gave her into a polling place and dropped them off.

Republicans have seized on the case as a sign of widespread voting fraud, but it is the only "ballot harvesting" case ever prosecuted under Arizona’s 2016 law banning the practice, and fewer than a dozen cases from the 2020 election have been filed in a state where more than 3.1 million votes were cast.

Sherri Castillo, a defense mitigation expert who interviewed Fuentes and others in the community, told the court Thursday that her community involvement and volunteer work are hard to adequately describe.

"She puts me to shame, I can tell you that," Castillo said. "I’ve never come across someone who gives back more to the community than Ms. Fuentes does."

Others who testified before Judge Roger Nelson included the county probation officer who recommended no jail time in her report, a Yuma County supervisor and former state senator who has known Fuentes for years, and a retired San Luis police officer who has known her since 1971 when both were growing up in the then-tiny border community and serves with her now on a local school board.

"I think that in our community a lot of us look up to her," retired police officer Luis Marquez said.

Assistant Attorney General Todd Lawson is seeking a year in prison for Fuentes, telling Nelson that the case is about the security of elections and the 2016 Arizona law barring so-called "ballot harvesting." This is the first prosecution under that law, which was upheld by the U.S. Supreme Court last year.

He said that while Fuentes and Juarez were captured on video by a political rival outside a vote center examining four voted ballots, the question remains what they were doing.

"The question is, why does (Fuentes) feel the need to exert pressure over people in her community and control the flow of their ballot to the ballot box," Lawson told the judge. "That’s the issue of public integrity here."

Prosecutors alleged in court papers that Fuentes ran a sophisticated operation using her status in Democratic politics in San Luis to persuade voters to let her gather and, in some cases, fill out their ballots. But they dropped more serious charges of conspiracy and forgery and both pleaded guilty to a single count of ballot abuse.

A defense expert who researched election law cases in Arizona testified that no one with a clean record has ever been sentenced to jail or prison in the past 20 years. Anne Chapman, Fuentes’ lawyer, told Nelson that doing so would be a miscarriage of justice.

"She entered a plea of guilty to ballot abuse — that is, delivering four lawfully voted, signature-verified ballots," Chapman said. "The rest of the allegations against Ms. Fuentes are untrue, unfounded, untested and largely made-up by election-denying political opponents who have a political ax to grind."

Nelson’s court assistant previously told attorneys in the case in an email that he intends "to give them 30 days in jail." He set sentencing for both women for next week.