As Phoenix's Sky Harbor airport experienced a ground stop late Friday night due to a storm, a bachelorette was worried she was going to miss her entire weekend with friends after being diverted to Las Vegas.

PHOENIX - A bride and her friends are spending the weekend in Old Town Scottsdale, but for a while, they didn't think it was going to happen because of a strong storm in the desert.

Friday's monsoon impacted travel plans for many flying into Phoenix and Ariel Adams recalls being diverted to Las Vegas and almost missing her own bachelorette party.

Torrential rain pounded much of the Valley overnight, leaving behind flooded roadways and yards.

Adams saw the monsoon from the skies as she was flying in from Washington D.C. for her bachelorette party, a problem she didn't expect to have while visiting the desert. 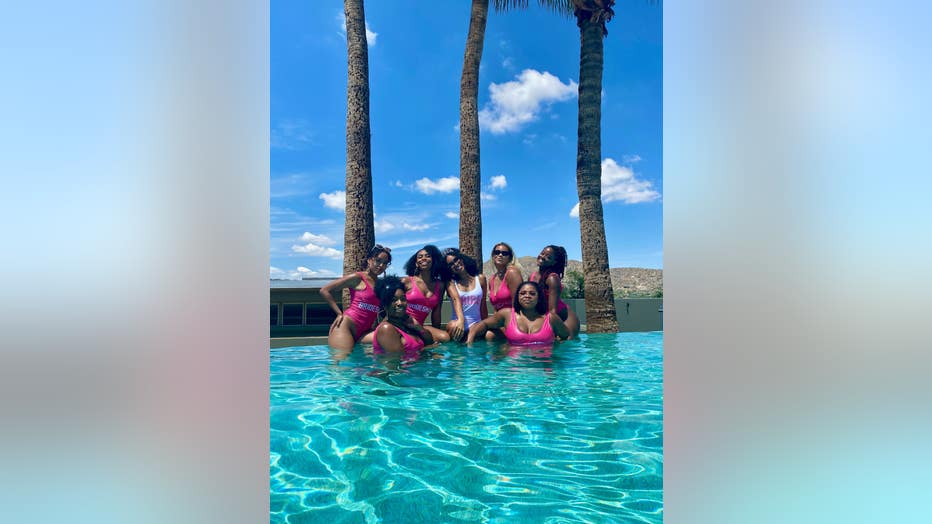 Ariel Adams nearly missed her bachelorette weekend in Arizona after her flight from the East Coast made a landing in Nevada due to a strong monsoon storm. Photo courtesy of Ariel Adams

"A lot of lightning, it was hard to see," Adams said about her flight into Phoenix.

Because of that storm, she says her plane had to circle Phoenix's Sky Harbor airport for over an hour, and eventually, the flight was diverted to Las Vegas.

Sky Harbor experienced a ground stop Friday night from 10:30  p.m. to 11:30 p.m., says Julie Rodriguez with the city of Phoenix. "Some flights were diverted to Tucson, Albuquerque, Las Vegas and LAX. The FAA Tower declared the ground stop for arrivals and departures due to weather," she added.

Residents saw vivid lightning storms, high winds and rain, and some homes saw downed trees as a result of the storm.  Officials say that between 7 p.m. Friday to 2:30 a.m. on Saturday, there were 60,000 recorded lightning flashes in central Arizona.

For a while, Adams was worried she might not make it in time to celebrate with her friends.

Nearly 12 hours after she was originally scheduled to land, Adams touched down in Phoenix.

"Very relieved, very tired but I also had the energy to see everyone, greet them and like I got a little more pumped once I saw my friends," she said.

At this point, they say no amount of rain will dampen their moods.

"Ready to resurrect my weekend and have fun with my girls," Adams said.