GILA BEND, Ariz. - A state of emergency has been declared for the town of Gila Bend after strong monsoon storms swept through the region overnight on Aug. 13, causing severe flooding, damage and at least two deaths.

The Gila Bend Community Center is open as a temporary shelter, and officials say the American Red Cross is on its way to help residents impacted by the storm.

There is also a shelter for people and their pets at the Gila Bend High School gym, located at 777 N. Logan Ave.

Gila Bend had nearly 1.5 inches (4 centimeters) of rain in 24 hours, but a nearby site along a state highway that was closed because of flooding measured 3.9 inches (10 centimeters) in the same period, according to the Maricopa County Flood Control District’s website.

Some people unaccounted for, at least 2 dead

It wasn’t clear how many people in Gila Bend were affected but Maricopa County sheriff’s Sgt. Monica Bretado said "several rescues and ongoing evacuations" were conducted.

Mayor Chris Riggs said in a Facebook video that a man and a woman died in the flooding.

"Hopefully we don’t find any more in our search," Riggs said. "We are a resilient community, and we are a strong community."

Some residents are unaccounted for, and people are being asked to check in on Facebook, by text or in person at the community center. You can text the town clerk, Beverly Turner, at 623-734-6504.

"Please leave your name and if you are safe/need help, or the name of the person you are trying to locate," officials said.

The Buckeye Fire District assisted with rescuing about 30 people in the Gila Bend area overnight into Saturday.

Arizona Governor Doug Ducey on August 16 issued a declaration of emergency, making up to $200,000 available for response and recovery efforts.

"Heavy rainfall, monsoons and flooding put our communities in serious danger, and we are working to make sure first responders and local leaders have the resources they need to protect Arizonans," Ducey said in a statement. "It’s crucial that we address the fallout of this flooding immediately before this causes more harm to our communities. We knew that there would be challenges that come from monsoon season, and we are prepared to address this. Our number one priority remains protecting people, pets and property throughout Arizona."

Maricopa County Chairman Jack Sellers declared a local emergency Saturday for the county in order to use emergency funds to help with response efforts.

"It also requests the State of Arizona declare an emergency in support of response operations," read a statement from county officials.

Officials said county crews would be helping with recovery efforts:

In addition to the Emergency Operations Center, the Maricopa County Department of Transportation is responding with crews and equipment to remove debris from roads and assist with recovery.  The Maricopa County Flood Control District is also monitoring the monsoon storms that produced almost four inches of rain in a short period of time. They will continue to monitor stream gauges and rainfall and provide updates to the community.

Officials have begun the cleanup process following the devastating flooding.

Mayor Riggs told FOX 10's Ty Brennan the town is in need of donations of totes for residents who need to pack up belongings.

Washed out roads caused by flooding

State Route 238 has reopened in both directions from Gila Bend to Maricopa after it was closed due to standing water caused by the rain. The closure stretched between State Route 85 and milepost 40, according to the Arizona Dept. of Transportation.

There was also a wash out at a railroad in the area.

"We can confirm that about 7:40 a.m. CST, Union Pacific personnel observed a wash out under out tracks in Gila Bend. We are currently working to repair the tracks and to fill in the wash out. The track has been closed. Barring in any additional rain and/or flooding, we hope to have the track repaired with a day or two," said Robynn Tysver with Union Pacific Railroad.

Another Flood Warning was issued for Gila Bend until 6:15 p.m. Saturday by the National Weather Service.

The town of Gila Bend, which holds around 1,900 residents, is a rural community in Maricopa County and is 70 miles southwest of Phoenix. 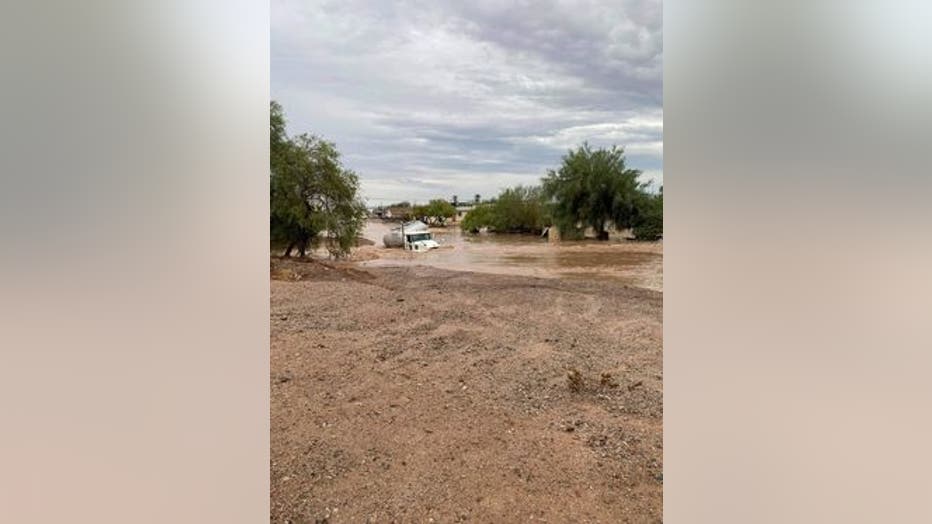 A vehicle is shown submerged underwater after a night of severe flooding in Gila Bend. (Troll Photography)