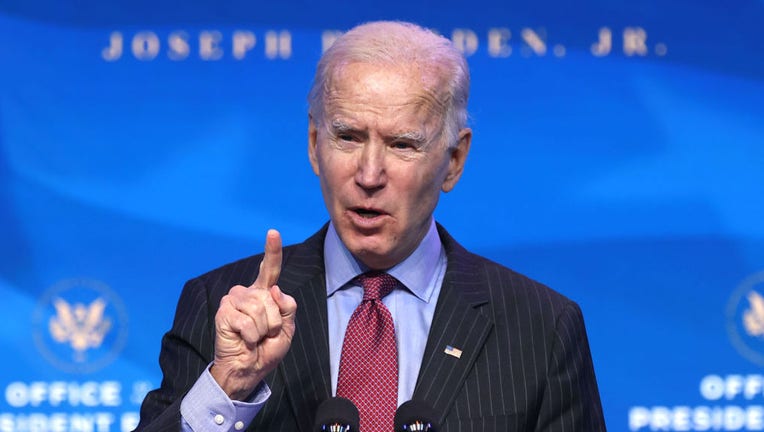 President Joe Biden delivers remarks after he announced cabinet nominees that will round out his economic team. (Photo by Chip Somodevilla/Getty Images)

WASHINGTON - President Joe Biden’s approval rating dipped to the lowest point of his presidency in May, a new poll shows, with deepening pessimism emerging among members of his own Democratic Party.

Only 39% of U.S. adults approve of Biden’s performance as president, according to the poll from The Associated Press-NORC Center for Public Research, dipping from already negative ratings a month earlier.

Of particular concern for Biden ahead of the midterm elections, his approval among Democrats stands at 73%, a substantial drop since earlier in his presidency. In AP-NORC polls conducted in 2021, Biden’s approval rating among Democrats never dropped below 82%.

The findings reflect a widespread sense of exasperation in a country facing a cascade of challenges ranging from inflation, gun violence, and a sudden shortage of baby formula to a persistent pandemic.

"I don’t know how much worse it can get," said Milan Ramsey, a 29-year-old high school counselor and Democrat in Santa Monica, California, who with her husband had to move into her parents’ house to raise their infant son.

Ramsey thinks the economic dysfunction that's led to her being unable to afford the place where she grew up isn't Biden's fault. But she's alarmed he hasn't implemented ambitious plans for fighting climate change or fixing health care.

"He hasn't delivered on any of the promises. I feel like the stimulus checks came out and that was the last win of his administration," Ramsey said of Biden. "I think he's tired — and I don't blame him, I'd be tired too at his age with the career he's had."

Republicans have not been warm to Biden for a while. Less than 1 in 10 approve of the president or his handling of the economy, but that's no different from last month.

Gerry Toranzo, a nurse and a Republican in Chicago, blames Biden for being forced to pinch pennies by taking steps like driving slower to conserve gas after prices have skyrocketed during his administration.

"His policies are destroying the economy," Toranzo, 46, said of Biden, blaming him for stopping the Keystone XL fuel pipeline to Canada and hamstringing domestic energy production. "It's a vicious cycle of price increases."

Overall, two-thirds of Americans disapprove of Biden’s handling of the economy. That rating is largely unchanged over the last few months, though elevated slightly since the first two months of the year.

But there are signs that the dissatisfaction with Biden on the economy has deepened. Just 18% of Americans say Biden’s policies have done more to help than hurt the economy, down slightly from 24% in March. Fifty-one percent say they’ve done more to hurt than help, while 30% say they haven’t made much difference either way.

Some Democrats blame other forces for inflation.

Manuel Morales, an internet service technician in Moline, Illinois, thinks the pandemic and war in Ukraine have had a far bigger impact than Biden's decisions. But the 58-year-old Democrat is now questioning the benefits of Biden's biggest legislative achievement, the American Rescue Plan, and its stimulus checks.

"It helped a lot of people, but," Morales said, "people did not want to go back to work."

Morales faults Biden on another area of persistent vulnerability to the president — immigration.

Only 38% back Biden on immigration, and Morales is disappointed at the scenes of migrants continuing to cross the southern border. Though he himself is a Mexican immigrant, Morales thinks the U.S. needs to more stringently control its border to have a hope of legalizing deserving migrants who are in the country illegally.

Also, Morales said, there have to be limits. "It's impossible to bring the whole of Central America and Mexico into this country," he said.

Another area where Morales faults Biden, albeit mildly, is the war with Ukraine. "We are spending a lot of money going to the Ukraine and all that is going to the deficit," Morales said.

Overall, 45% of Americans approve of Biden’s handling of the U.S. relationship with Russia, while 54% disapprove. That’s held steady each month since the war in Ukraine began. Seventy-three percent of Democrats and 15% of Republicans approve.

Charles Penn, a retired factory worker in Huntington, Indiana, is satisfied with Biden's performance on Ukraine.
"I think he's done alright," Penn, 68, said of the president.

But overall Penn, an independent who leans Republican, is disappointed with Biden, and blames him for rising prices that have squeezed him in his retirement.

"The Democrats in the long run have screwed up things by pushing for higher wages, like going from $7 an hour to $15 an hour," Penn said, citing the push for a sharp increase in the federal minimum wage that Biden has embraced. "The other side of it is that if you had Republicans, they'd cut my Social Security."

"He's captain of the ship, so he's responsible," Penn said of the president.

The AP-NORC poll of 1,172 adults was conducted May 12-16 using a sample drawn from NORC’s probability-based AmeriSpeak Panel, which is designed to be representative of the U.S. population. The margin of sampling error for all respondents is plus or minus 4.0 percentage points.