Biden thanks troops ahead of Memorial Day weekend

President Joe Biden traveled to Joint Base Langley Eustis to thank U.S. troops for their service. After beginning with an emotional remembrance of his late son Beau, a veteran, Biden acknowledged the unheralded sacrifices made by the service members and their families.

HAMPTON, Va. - President Joe Biden on Friday kicked off the Memorial Day weekend by celebrating progress made in the fight against COVID-19 during a visit to Virginia and thanking U.S. troops for their service.

Biden joined Virginia Gov. Ralph Northam, a Democrat, at a business in Alexandria to tout the state’s success in the fight against COVID-19. On Friday, Virginia eased all social distancing and capacity restrictions amid declining virus cases and the widespread availability of vaccines.

The president visited Sportrock Climbing Centers — an 18,000 square foot space of climbing and bouldering walls, a gym, and yoga studios — to celebrate progress made as the country looks to turn the corner on the coronavirus pandemic that has killed more than 593,000 Americans and 3.5 million people worldwide.

Over half of all American adults are now fully vaccinated against COVID-19, a notable milestone reached earlier this week. Nearly 160 million adults — or 62% — have received at least one dose of a vaccine, according to data published by the U.S. Centers for Disease Control and Prevention.

Biden, who later paid tribute to the armed forces with an address at an Air Force base elsewhere in Virginia, used the day to thank Americans who have already received vaccinations and again urged those who haven't to get their shot.

"All over the country we’ve gone from pain and stagnation of a long dark winter to an economy on the move," Biden said. He added, "Americans of every party, race, creed have come together and rolled up their sleeves - literally - and done their part." 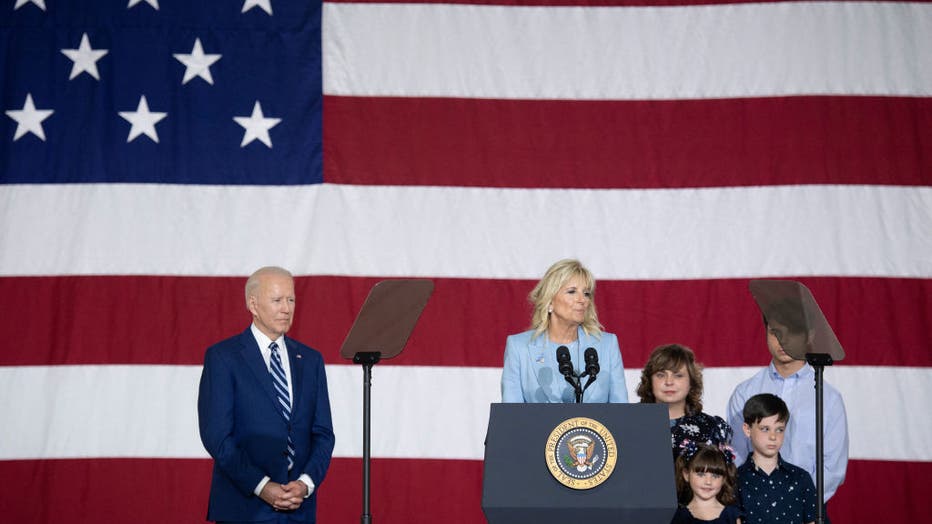 President Joe Biden and others listen while first lady Jill Biden speaks at Joint Base Langley-Eustis on May 28, 2021, in Hampton, Virginia. (Photo by BRENDAN SMIALOWSKI/AFP via Getty Images)

Biden has set a goal of 70% of adults to have received at least one dose by Fourth of July. At least nine states have already crossed that threshold, according to White House officials — and 25 states and the District of Columbia have fully vaccinated at least 50% of their adult residents.

Virginia, specifically, has fully vaccinated nearly 55% of its adult population and 66.4% of adults have received at least one dose, according to the state health department. Cases and deaths have both continued to decline in recent weeks.

Northam, who is a pediatric neurologist by occupation, said that there is "finally a very bright light at the end of this long tunnel" due to Biden following scientists' advice on his approach to the pandemic.

"As a doctor, I know it also makes a big difference when leadership respects science and follows its lead," Northam said.

The long holiday weekend that marks the unofficial start to the summer comes at a moment when the federal government and state governments are relaxing masking and social distancing rules now that a majority of Americans are vaccinated and more Americans are looking to return to their pre-pandemic routines.

AAA said it expects more than 37 million Americans to drive or fly in the coming days, an anticipated rebound after the COVID-19 lockdown shuttered travel and vacation plans last year. Only 23 million Americans traveled for the 2020 holiday, which was the lowest number on record, AAA said.

Later in the day, Biden and first lady Jill Biden visited Joint Base Langley-Eustis in Hampton to thank U.S. troops for their service. After beginning with an emotional remembrance of his late son Beau, a veteran, Biden acknowledged the unheralded sacrifices made by the service members and their families.

"You are the very best of what America has to offer," Biden said.

Biden also underscored his recent decision to pull troops out of Afghanistan later this year, expressing gratitude to service members who took multiple tours of duty in America’s longest war.

"My message for you is simple: Thank you," the president said, adding that they were "1% of the population defending 99% of the rest of us. You’re incredible."

The president was then scheduled to travel to his home in Wilmington, Delaware, where he is expected to spend most of the holiday weekend. He was slated to participate in a Memorial Day event there on Sunday before returning to Washington and visiting Arlington National Cemetery on Monday.