Cold air is surging south in the wake of a powerful nor'easter that brought record-breaking snowfall and strong winds to the mid-Atlantic and Northeast on Saturday.

Areas from Maine and northern New England to South Florida will see temperatures at or below freezing into the workweek. 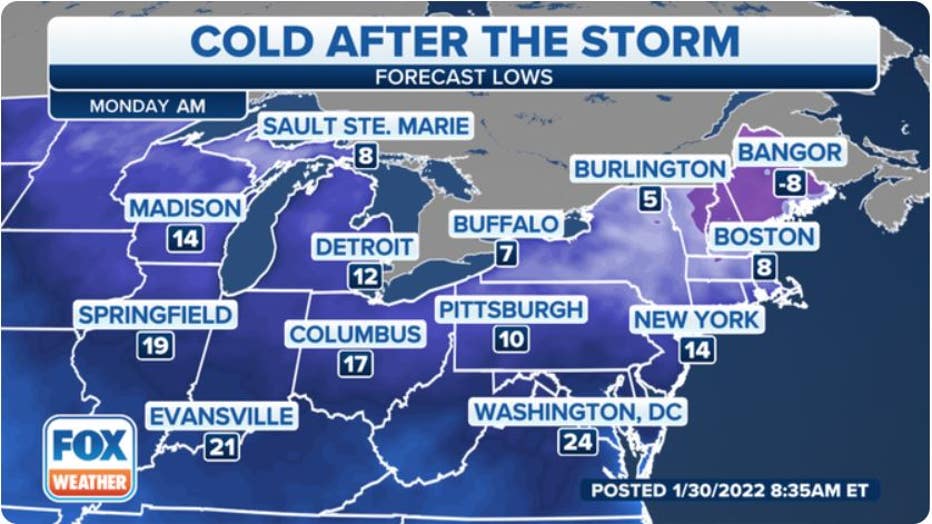 Forecasters say the temperature could dip to -8 degrees below zero in Bangor. In fact, most of Main will be sub-zero Monday morning.

While other parts of New England and the Northeast won't be as cold as Sunday, it will still be frigid. Boston is expected to be around 8 degrees.

There will be a bit of a break by the time we get to Tuesday morning. While extreme northern New England will again see sub-zero low temperatures, further south will be warmer. Boston is expected to drop to about 14 degrees Tuesday morning.

New York City will be in the low-20s. 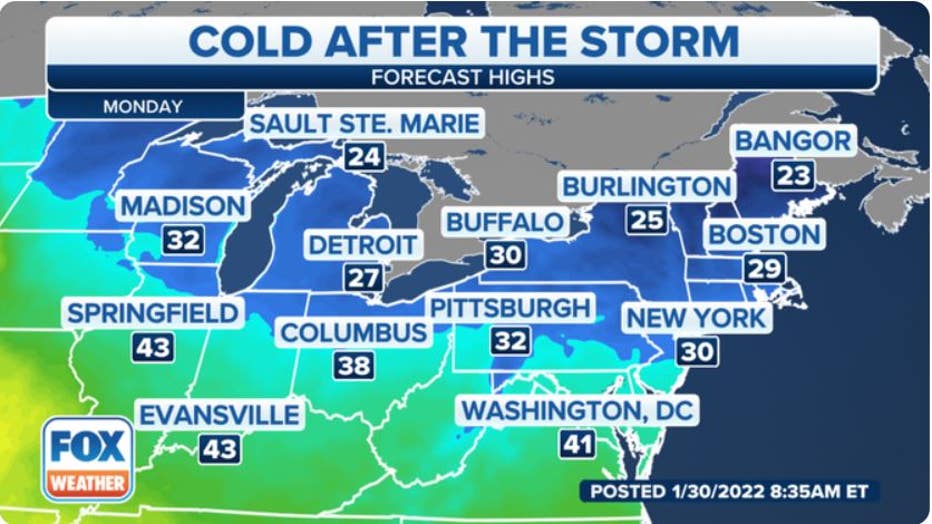 There will be some relief from the bitter cold temperatures starting on Monday.

Areas across New England will remain in the 20s and 30s. New York will also begin to see some relief from the bitter cold. New York City is expected to be around 30 degrees. Pittsburgh is forecast to get to around 32 degrees. 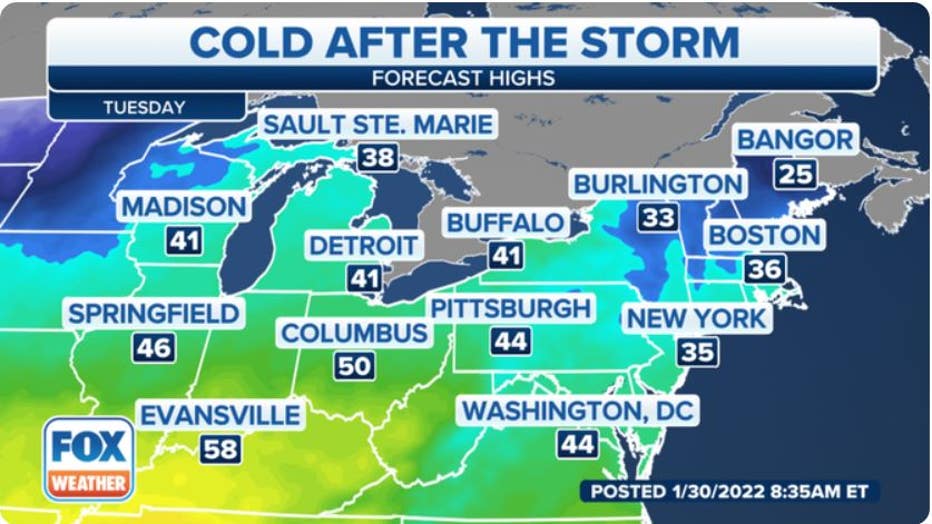 Boston will creep closer to 40 degrees while New York City is expected to get to around 35 degrees. To the west in Pittsburgh, people in that area will enjoy temperatures in the mid-40s. Buffalo will also enjoy the warmer air, as temperatures will hit 41 degrees. 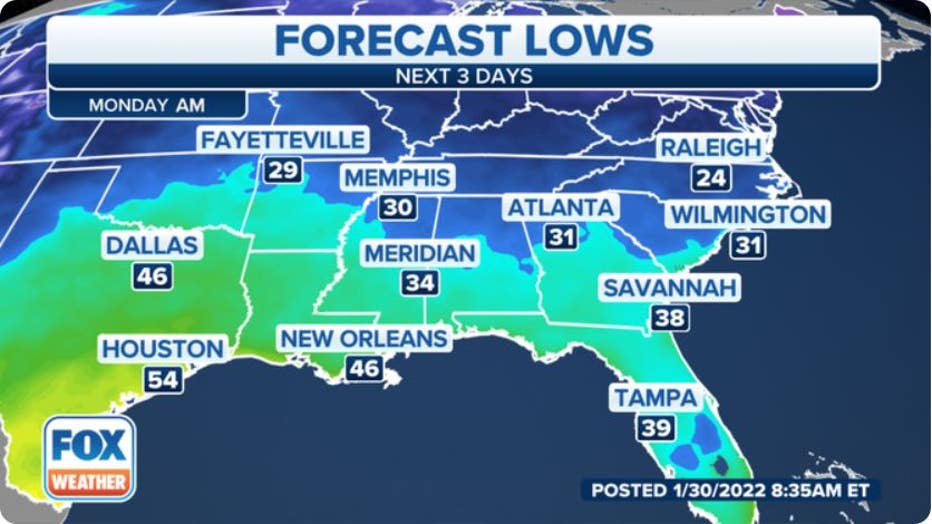 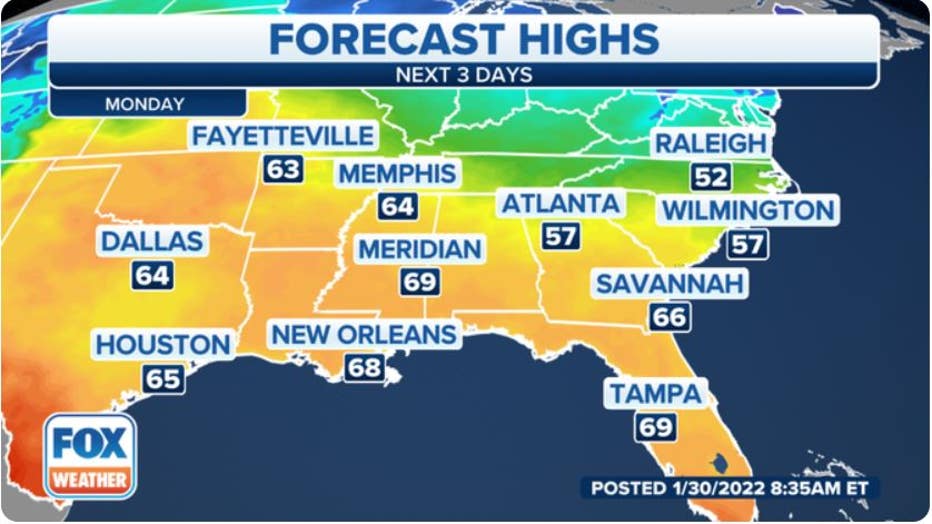 Temperatures should warm up nicely on Monday, however. Atlanta and points south will be in the upper-50s. Closer to the Gulf of Mexico, from Houston to Tampa will be in the mid-60s to around 70 degrees in Tampa. 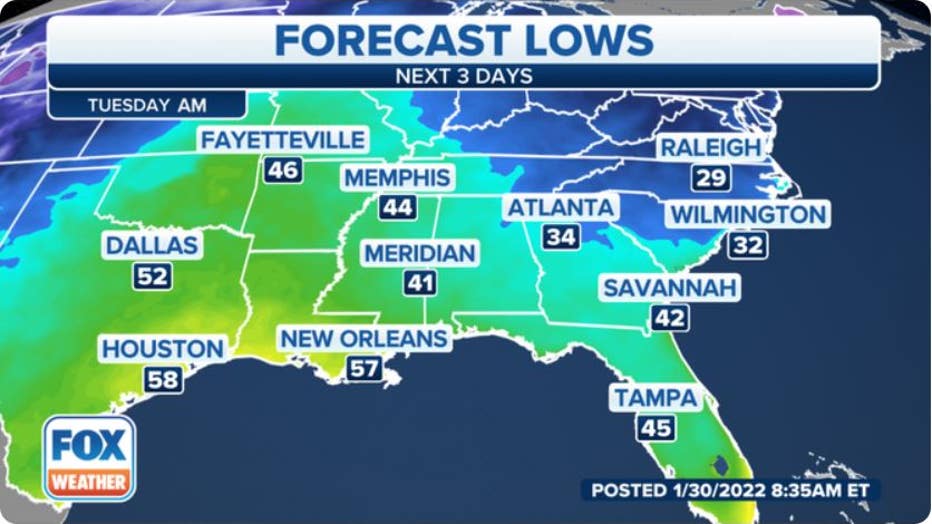 Finally, the cold air will begin to retreat to the north by Tuesday morning. Areas that saw morning temperatures below freezing should finally get some relief.

The exceptions are Raleigh and Wilmington, where temperatures will remain in the upper-20s and low-30s to start the day.

Atlanta will dip to around 34 degrees Tuesday morning. Savannah will be closer to 40 degrees. Northern and Central Florida will be in the 40s, while South Florida will be warmer. 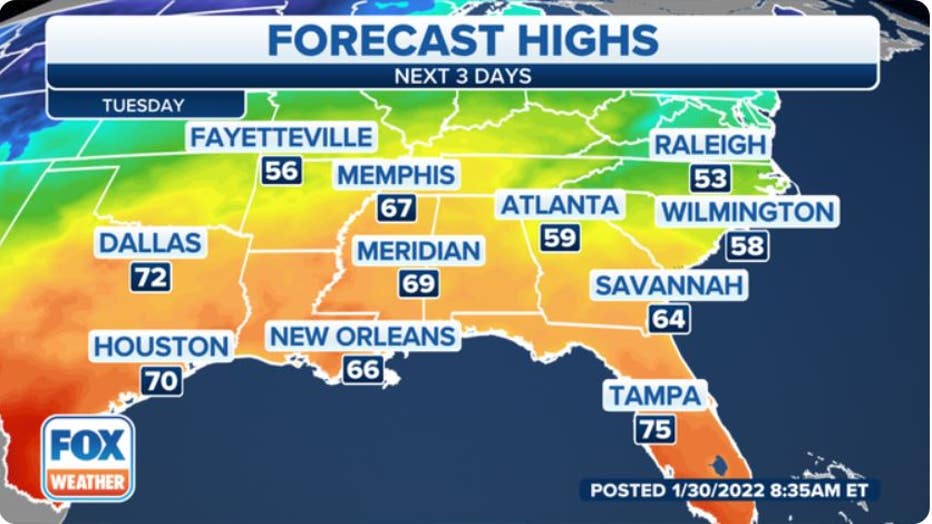 Temperatures in Raleigh will get to around 53 degrees on Tuesday. Wilmington will reach near 60 degrees.

Atlanta will get close to 60 degrees, while Savannah will be around 64 degrees.

Florida will warm up to the mid-70s during the day.