PHOENIX - Arizona surpassed 1 million COVID-19 cases Friday, becoming the 13th state to reach the grim milestone while contending with yet another major spike in infections.

The benchmark is the latest in a tumultuous year and a half where Arizona went from being touted as a pandemic success story to being "the hot spot of the world" and then being a model again when vaccinations became available. Now, the state, like the rest of the country, is coping with a surge — mostly of the unvaccinated — and ongoing conflicts over mask and vaccine mandates.

It ranks 13th nationwide in the number of cases per 100,000 residents, according to the U.S. Centers for Disease Control and Prevention’s COVID Data Tracker.

Surprise couple speaks out after they recover from COVID-19

Jim Kalweit's wife, Kimberly, spent several weeks in the hospital during her COVID battle, and at one point, Jim thought he wife would not make it. FOX 10's Irene Snyder reports.

On a day Arizona passed the sobering milestone, a couple in the West Valley spoke out about their battle against COVID-19.

Jim's wife, Kimberly, came down with COVID-19 after travelling to visit family in Florida and North Carolina. Within day, both tested positive, and Kimberly was rushed to the emergency room.

"They had to put her on a BiPap right away, transfer her to Chandler, as [it was] the closest open facility, and there, within an hour, she was put on a ventilator," said Jim.

Jim said both him and Kimberly were not vaccinated.

Kimberly said she doesn't remember anything from her days on the ventilator, and even now, her memory is very foggy.

There were moments in the hospital when Jim, a paramedic, thought Kimberly might not make it.

"I told them ‘I know I want you guys to be straight up with me. I need the truth,’ and they were super nice with that, gave us all the information we needed, but it's scary cause you know -- and then you have to tell the family," said Jim.

In January 2020, a person with ties to Arizona State University got sick after traveling to Wuhan, China, the epicenter of the outbreak, and became one of the first five confirmed cases in the United States. The person isolated at home and recovered.

However, within two months, more than 100 cases had been reported across most counties and the Navajo Nation.

Arizona’s first death was reported on March 20, 2020, a man in his 50s in Maricopa County, followed by a second two days later.

On March 30, 2020, Gov. Doug Ducey issued a month-long stay-at-home order, allowing people to only go out for food, medicine and other "essential activities." Non-essential businesses such as the Rebel Lounge, a Phoenix music club, basically had to shut down.

The club’s owner, Stephen Chilton, went about a year without staging any performances and was forced to furlough most of his staff. He canceled and rebooked shows as many as six times, all without generating any revenue.

Chilton opened his doors again in October, this time operating as a coffee shop. Full-capacity performances resumed in June but now with the delta variant, some bands are again calling off shows and Chilton is again crossing out calendar dates.

"You can’t have a lot of expectations — I guess that’s how you manage them," Chilton said.

Backlash to Ducey’s stay-home order led to a crowded, largely mask-free protest at the state Capitol on April 20, 2020. Nine days later, he began easing up on his coronavirus restrictions, allowing some businesses to reopen ahead of a visit by then-President Donald Trump to a mask factory near Phoenix Sky Harbor Airport.

Meanwhile, deaths around the state inched up at an increasing pace. An outbreak took hold on the Navajo Nation and would grow to tax the health care systems across northern Arizona and New Mexico. By June 3, the Navajo Nation had recorded 252 deaths. Navajo President Jonathan Nez ordered a series of strict weekend curfews to control the disease, which continued on and off through much of 2020.

By the end of May 2020, Arizona virus deaths topped 900 and known infections surpassed 20,000. Hospitalizations hit a record high and hospitals began warning they would soon need to implement surge plans to deal with excess patients.

Despite mounting pressure, the Republican governor refused to impose a mask mandate and continued blocking local governments from instituting their own. He relented on June 17, 2020, giving cities and counties the power to require masks. Most did. 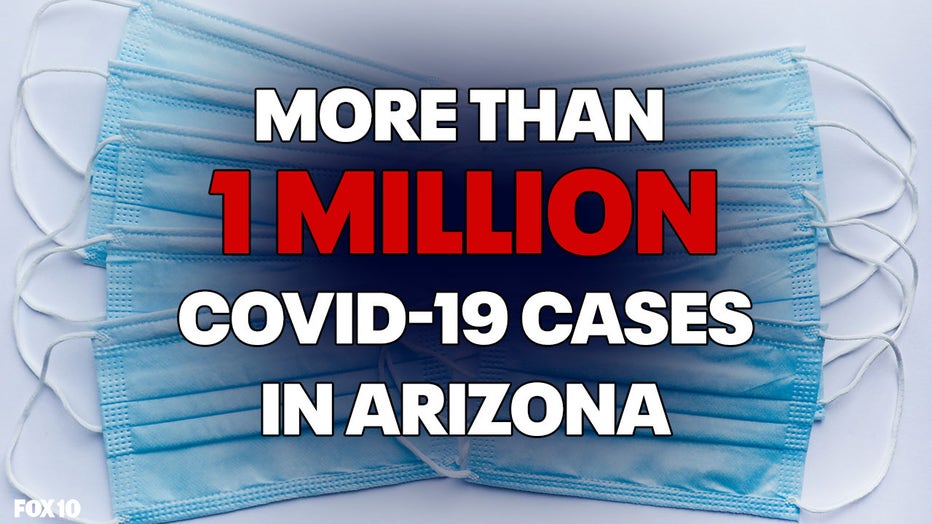 LIST: Mask or no mask? Which retailers and restaurants are requiring face coverings

It was that month that Kristin Urquiza lost her father to the virus. She drew headlines when she partly blamed Ducey for his death, saying Mark Anthony Urquiza believed in May it was safe to go out.

She channeled her outrage into co-creating Marked By COVID, a nonprofit looking to shape policy and train people to advocate on pandemic-related matters. Urquiza sometimes thinks about where she would be had COVID-19 never happened. She never saw herself running an organization.

"Having that lived experience of losing my dad, it has helped me connect with a couple of things I didn’t always have," Urquiza said. "I feel like it is important for me to stand up myself and that’s OK to take up space and stand in my own power."

After a slowing of hospitalizations in late summer, new infections drove an overwhelming winter surge. Hospitals pleaded for more restrictions to control the spread of the disease, but Ducey declined.

"I don’t think the right answer is to throw hundreds of thousands of Arizonans out of work right before the holidays," Ducey said at the time.

The number of cases topped 500,000 by Dec. 28. Hospitals and intensive care units filled up, and some were forced to turn away ambulances.

At that time, Molly Elkins, 27, was three months into what would end up being an eight-month stint as an ICU nurse in Phoenix. When she started her nursing career three years ago, she wanted to work in the ICU. But she never pictured constantly being surrounded by death and crying with patients’ families as they said a final goodbye on FaceTime.

Worried about her mental health, Elkins switched to being a surgical nurse in May.

"I would have nightmares. I would come home and still be physically and emotionally upset at the end of the day," Elkins said. "I feel like I’m more protective of myself. I know how to stand up for myself and put my needs first."

On Jan. 3, Arizona posted its highest count of new cases for a single day: 17,234. But with mass vaccine distribution on the horizon, there was reason for hope.

As the vaccine supply ramped up, the state expanded vaccination centers, including one that received a supportive shout out from President Joe Biden and Vice President Kamala Harris.

Hospitals once again are sounding the alarm that their beds are filling up, their staff contending with another influx of patients. This time, the patients are almost entirely people who declined to get vaccines proven highly effective at preventing hospitalization.

Caroline Maloney, a nurse for nearly 30 years who has worked at HonorHealth’s Scottsdale Osborn Medical Center for more than a decade, has been in the thick of the pandemic from the start. She has seen the ebbs of flows of the virus as it surged in summer 2020, this past winter and again now.

"I don’t think the human brain can process it," she said of Arizona hitting 1 million cases and 18,600 deaths. "I don’t think when you are an individual that you can fathom that number. It’s incomprehensible."