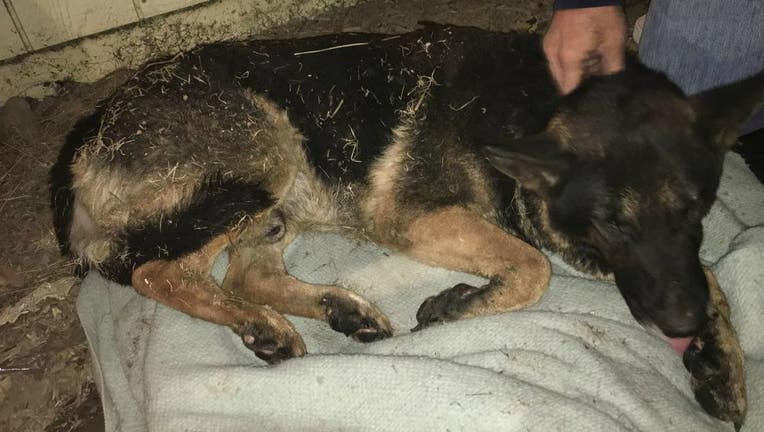 MENDOCINO COUNTY, Calif. (KTVU) - A dog whose paws were burned to a crisp in the Mendocino Complex Fire was able to find help from kind-hearted humans.

Shelina Moreda along with two others from NorCal Livestock Evac were doing checks on animals whose owners were under mandatory evacuations when they found the dog in a great deal of pain.

"This is a part of the fires that people forget... animals need to be fed, even if the fire skips over them... We have to do what we can, that's our job as humans." said Moreda.

Moreda came across the dog, and a neighbor named Ken, while she was scouting the area.

Ken had just watched his home burn to the ground earlier in the day, but was doing what he could to comfort the dog. Ken had made a bed for the dog and was feeding him.

"(Ken) was doing his best to stay positive, and asked for nothing from us... even though he had lost everything and was giving whatever he had to this poor dog," said Moreda.

Moreda and the other volunteers weren't sure how to best help the dog so they decided to leave and return with medical supplies and food.

"We couldn't get ahold of who we thought the owner was, so this dog became my mission," said Moreda. She contacted a veterinarian to see how best to help the animal.

The dog's paws were literally smoking and hot to the touch so they put cold, wet towels on them. They got the dog into her truck and Moreda drove him to an emergency vet.

Moreda didn't give it a second thought when she signed a paper at the veterinarian's office saying she would be responsible for the bill. She knew it was the right thing to do.

"Sometimes you have to make an ethical call, and hope that things work out... (I) held him while we bandaged him up, the whole time he communicated that he knew we were helping him. He was so patient, and so tough. Licking my hand whenever he wanted to let me know that he still knew I had his back. I can't imagine how painful this all was, but he was so strong," she said.

Moreda continues to visit the dog, who she lovingly calls 'Fire Dog,' twice a day as he recovers.

Although he's suffered an infection, his wounds are bandaged and he continues to show signs of improvement.

Donations to help the animals impacted by the fire can be made here.