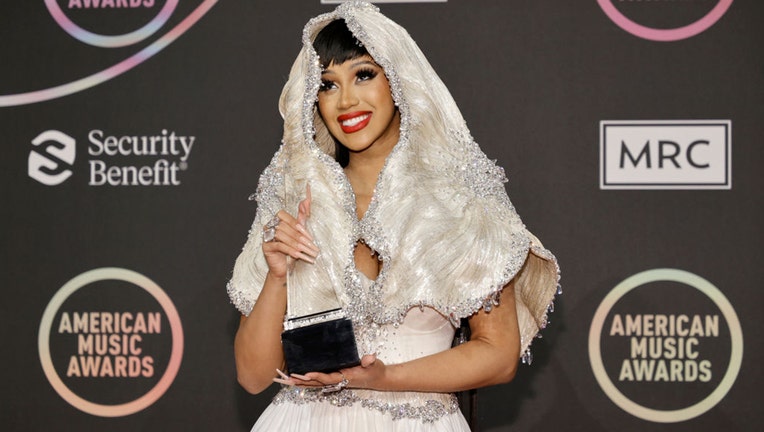 Cardi B, winner of the Favorite Hip-Hop Song award, poses at the 2021 American Music Awards at Microsoft Theater on November 21, 2021 in Los Angeles. (Photo by Amy Sussman/Getty Images)

NEW YORK - Rapper Cardi B says she will cover the burial expenses for all of the victims of the tragic Bronx fire earlier this month.

17 people, including 8 children, died in the high-rise fire in the Fordham Heights section of the city.

The Bronx native and Grammy Award-winning artist has committed to paying costs, including repatriation expenses for some victims buried in Gambia, through the Mayor's Fund's Bronx Fire Relief Fund.

"I’m extremely proud to be from the Bronx and I have lots of family and friends who live and work there still. So, when I heard about the fire and all of the victims, I knew I needed to do something to help," Cardi B said in a statement.

"The resilience of this city reflects everyday New Yorkers who never turn their back on one another," Mayor Eric Adams said in a statement. "We are grateful for Cardi B, a real superstar on and off the mic, for granting some critical financial relief to families of the victims. The city will be forever thankful to her and also to the grassroots donors and corporate partners who have been able to offer immediate support for our neighbors in need, to reestablish themselves during this difficult time."

Cardi B said, "I cannot begin to imagine the pain and anguish that the families of the victims are experiencing, but I hope that not having to worry about the costs associated with burying their loved ones will help as they move forward and heal. I send my prayers and condolences to everyone affected by this horrific tragedy."

The Bronx Fire Relief Fund has raised more than $2.5 million in donations.

Anyone interested in contributing to the fund can donate online at www.nyc.gov/fund, or by mailing a check — made payable to "The Mayor's Fund to Advance New York City," indicating that donations are for the "Bronx Fire Relief Fund" in the memo field or a note enclosed with the check — to the Mayor’s Fund to Advance New York City, 253 Broadway, 6th Floor, New York, NY 10007.

The Jan. 9th fire was sparked by a space heater.  Fire officials say most of the victims died of smoke inhalation.

The FDNY and NYPD identified all 17 victims of the Bronx apartment fire. The oldest was 50 while the youngest was 2. They all died from smoke inhalation.