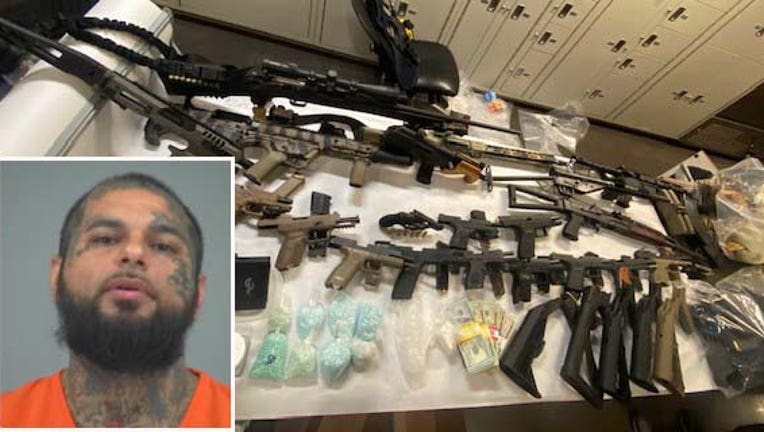 ARIZONA CITY, Ariz. - An Arizona man suspected of being a drug supplier was arrested after police say they seized numerous drugs, weapons, and cash.

Casa Grande Police say Vicente Rodriguez, a 34-year-old resident of Arizona City, was arrested on Nov. 2, following a lengthy investigation into his alleged involvement in supplying known fentanyl dealers and addicts with drugs.

"One of the firearms, a 1911 .45 caliber handgun, was reported stolen to the Casa Grande Police Department in October of this year," police said. "Additionally, Rodriguez is a convicted felon and a documented gang member.

Rodriguez was booked into jail and is accused of multiple drug and weapons charges.

"This arrest is the result of an excellent investigation by our narcotics unit," Casa Grande Police Chief Mark McCrory said. "Supplying illegal and often times deadly drugs into Casa Grande, such as Fentanyl and Methamphetamine, is a serious threat to our community and one we do not take lightly. The sale and use of illegal drugs combined with the illegal possession of firearms is a deadly combination and places innocent members of our community at risk. We will continue in our diligence to bring criminals who prey on citizens of Casa Grande to Justice regardless of where they reside."