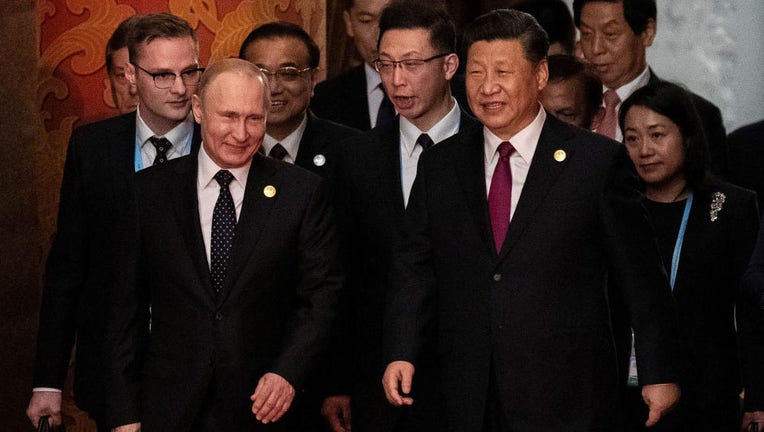 BANGKOK - As Russia intensifies its assault on Ukraine, it is getting a helping hand from China in spreading inflammatory and unsubstantiated claims that the U.S. is financing biological weapons labs in Ukraine.

The U.S. has been quick to refute Russia’s conspiracy theory, and the United Nations has said it has received no information that would back up the claim, but that hasn’t stopped it from proliferating.

The partnership between the two authoritarian countries, which weeks ago said their ties had "no limits," appears aimed at muddying the waters of the rationale for Russia’s invasion in what American officials have called an "information war" that some fear could lay the groundwork for a "false-flag" operation.

China's Foreign Ministry has helped fuel the fire this week, repeating the Russian claim several times and calling for an investigation.

"This Russian military operation has uncovered the secret of the U.S. labs in Ukraine, and this is not something that can be dealt with in a perfunctory manner," ministry spokesperson Zhao Lijian said Thursday.

"It is not something they can muddle through by saying that China's statement and Russia's finding are disinformation, and are absurd and ridiculous."

Indeed, Pentagon press secretary John Kirby called the Russian claim "a bunch of malarkey," but in testimony to the Senate Intelligence Committee on Thursday, CIA Director William Burns also noted grave concern that Russia might be laying the groundwork for a chemical or biological attack of its own, which it would then blame on the U.S. or Ukraine in a false flag operation.

"This is something, as all of you know very well, is very much a part of Russia's playbook," he said. "They've used these weapons against their own citizens, they've at least encouraged the use in Syria and elsewhere, so it's something we take very seriously."

Moscow initially claimed that its invading forces had found evidence of hasty attempts to conceal biological weapons research in Ukraine.

The head of the Russian military’s radiation, chemical and biological protection troops, Igor Kirillov, doubled down on Thursday, saying that U.S.-sponsored labs in Kyiv, Kharkiv and Odesa were working on dangerous pathogens custom-designed to target Russians and other Slavs.

"We can say with a high probability that one of the goals of the United States and its allies is the creation of bioagents capable to selectively infect various ethnic groups," Kirillov said.

RELATED: Russia-Ukraine war: 2 million have fled Ukraine — half of them children, UN says

The U.N. Security Council scheduled a meeting Friday at Russia's request to discuss Moscow's claim. Olivia Dalton, spokesperson for the U.S. Mission to the U.N., said the American delegation would not let it become "a venue for promoting their disinformation."

China has been actively promoting the claim, however, with headlines like "Russia reveals evidence of U.S.-funded bio-program in Ukraine" and "China urges U.S. to disclose more details about biolabs in Ukraine" on state-run China Global Television Network's website. The Communist Party's Global Times newspaper published a story Thursday with the headline "US tries to refute ‘rumors’ about its biolabs in Ukraine, but can we believe it?"

A nearly three-minute video of a Russian Defense Ministry news conference repeating the allegations has been viewed more than 10 million times on Sina Weibo, a popular Chinese social media platform akin to Twitter, and liked more than 90,000 times.

Following years of anti-U.S. rhetoric from Communist Party leaders and the state-controlled media, many Chinese are convinced the U.S. cannot be trusted and that the West is on the decline while seeking to contain China’s rise.
The claim has also picked up traction with far-right groups and media in the U.S.

China is broadly seen as taking Russia’s side in the conflict, most conspicuously in refusing to refer to it as a war or an invasion in keeping with Moscow’s usage. It has also toed Russia's line on the root causes of the conflict, pointing to NATO's eastward expansion and a failure to acknowledge Russia’s "legitimate security concerns."

At the same time, it is also seeking to avoid fully casting its lot in with Russia as Belarus has, seeking to present itself as merely a concerned third party.

China has abstained on U.N. votes censuring Russia and has criticized economic sanctions against it. It has expressed its support for peace talks and offered its services as a mediator, despite having little experience in such a role and questions about its neutrality.

Chinese officials have also said Washington shouldn't be able to complain about Russia's actions because the U.S. invaded Iraq under false pretenses, maintaining it had evidence Saddam Hussein was stockpiling weapons of mass destruction though none was ever found.

China has also used the opportunity to repeat its claim that the U.S. created the virus that causes COVID-19 at a lab in Fort Detrick in Maryland, which it first floated in an apparent attempt to deflect American claims from then-U.S. President Donald Trump and other senior American officials that the coronavirus originated in a research laboratory in Wuhan, China.

Two extensive studies released last month point to an animal market in the city as the likely origin.

"The international community has long been highly concerned about the biological military activities of the United States," Zhao said in response to a question about what evidence China had to back up Russia's claims. "What did the U.S. do at the Fort Detrick base within its territory?"

It is not the first time Russia has spread disinformation about American biological weapons research.

During the Cold War in the 1980s, Russian intelligence spread the claim that the U.S. created HIV, the virus that causes AIDS, in a lab. More recently, Russian state media have promoted theories about dangerous research at labs in Ukraine and Georgia.

In this case, Russia has tried to counter the U.S. pushback by saying that it is Ukraine, not Russia, that could be preparing a false flag attack.

Russian Defense Ministry spokesperson Maj. Gen. Igor Konashenkov said Wednesday that Ukrainian "nationalists" have stockpiled about 80 tons of ammonia in Zolochiv near Kharkiv in preparation for a possible "provocation with toxic agents to accuse Russia of chemical weapons use."

Ukrainian President Volodymyr Zelenskyy said the accusation itself was ominous.

"That worries me very much because we have often been convinced that if you want to know Russia’s plans, they are what Russia accuses others of," he said in his nightly address to the nation Thursday.

"I am a reasonable person. The president of a reasonable country and reasonable people. I am the father of two children," he said. "And no chemical or any other weapon of mass destruction has been developed on my land. The whole world knows this."

In his testimony to the Senate panel, Burns said the U.S. strategy in the current conflict of declassifying and publicly releasing what is known about false narratives and possible Russian false-flag operations has paid dividends so far.

"I think we have had a great deal of effect in disrupting their tactics and their calculations and demonstrating to the entire world that this is a premeditated and unprovoked aggression built on a body of lies and false narratives," Burns said.
"This is one information war that I think Putin is losing."