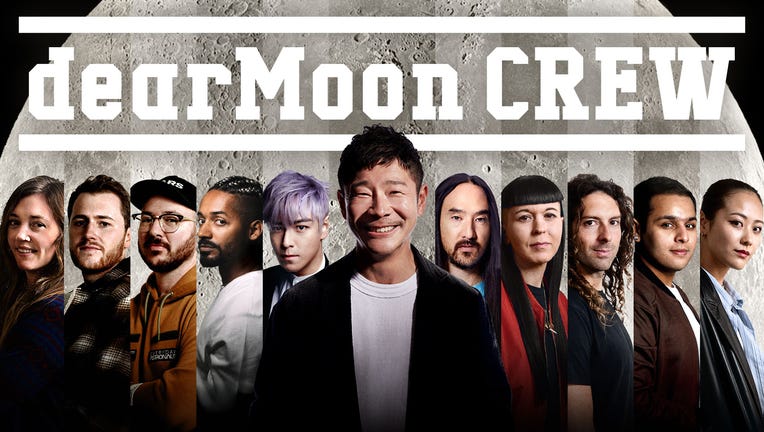 DJ Steve Aoki, K-Pop star T.O.P., and YouTuber Tim Dodd are among the eight people joining a Japanese billionaire on an upcoming "dearMoon" mission, which aims to fly around the moon on a SpaceX spaceship as soon as next year.

Yusaku Maezawa, a 47-year-old who made his fortune in retail fashion, first launched plans for the moon mission in 2018, buying all the seats on the spaceship. It will be the first of its kind by the Elon Musk-owned company.

Maezawa began taking applications from around the world in March 2021 for what will be his second space journey after his 12-day trip to the International Space Station on the Soyuz Russian spaceship last year.

The dearMoon trip is expected to take about a week. The spaceship will not make a lunar landing but is expected to come within 120 miles of the moon's surface while circling it for three days.

The eight people Maezawa selected for his "dearMoon project" are T.O.P., who debuted as a lead rapper for the K-Pop group Big Bang; American DJ Steve Aoki; filmmaker Brendan Hall and YouTuber Tim Dodd, also from the United States.

Maezawa made the announcement on Friday via his social media accounts and the dearMoon Project website, after he tweeted last week saying he held an online meeting with SpaceX founder Elon Musk and that his "major announcement about space" was underway.

T.O.P.’s real name is Choi Seung-hyun. The 35-year-old started out as an underground rapper before joining Big Bang, one of the world’s top boy bands, in 2006.

T.O.P. said in a video released by the dearMoon website that he has always fantasized about space and the moon since he was a child and, "I cannot wait."

"When I finally see the moon closer I look forward to my personal growth and returning to the earth as an artist with an inspiration," he said.

In a video posted after the announcement, Dodd said he "genuinely still can’t believe it."

"It still hasn’t even sunk in yet — and I’ve known for quite awhile," he added.

Last year, Maezawa, 47, and his producer Yozo Hirano became the first self-paying tourists to visit the space station since 2009. He has not disclosed the cost for that mission, though reports said he paid $80 million.

Maezawa made his fortune in retail fashion, launching Japan’s largest online fashion mall, Zozotown. In 2019, he resigned as CEO of the e-commerce company Zozo Inc. to devote his time to space travel. Forbes magazine estimates his wealth at $1.9 billion.

In a statement, Maezawa said they received applications from about 1 million people "from all around the world."

"I had deep conversations with each candidate, asking them about their childhood, why they are dreaming about going to space, what kind of challenges they would like to undertake," he said.

"There isn't a set task for each of them, but I hope each and every one crewmember will recognize the responsibility that comes with leaving the Earth, traveling around the Moon, and back within a week. They will gain a lot from this experience, and I hope they will use that to contribute to the planet, to humanity," Maezawa added.

As Orion began its closest approach to the moon yet, NASA shared live views of the moon and Earth as seen from the Artemis I spacecraft.

The trip aboard SpaceX’s futuristic Starship is expected next year, though the exact schedule has not been disclosed.

Starship is a fully-reuseable spacecraft, set to carry enormous amounts of cargo and people at once and "pioneer a new era of space exploration," the project said in a press release.

NASA already has contracted for a Starship to land its astronauts on the moon in 2025 or so, in the first lunar touchdown since Apollo.