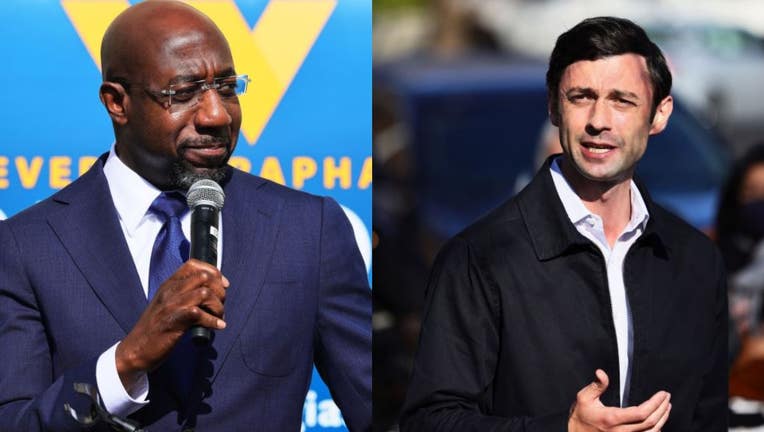 ATLANTA - Georgia, known as a Republican stronghold for decades, appears to have turned blue with the apparent election of two Democrats to represent the state in the Senate.

The vote was extremely tight as polls conducted by FOX 5 and other sources have stated since the November election.

Warnock, who "grew up in public housing" in Savannah and "went to college on a Pell Grant" before eventually becoming the pastor of Martin Luther King’s church in Atlanta, appeared to help draw a surge in Black voters across the state.

Warnock took nearly a third of the vote in November’s Special Election that saw a 20-candidate melee that left him and Loeffler, who beat out fellow Republican Doug Collins with 25 percent of the vote, still standing.

One of Georgia's runoffs remains undecided, with Ossoff leading by roughly 16,800 votes.

The pastor of Ebenezer Baptist Church will be the first Black senator from Georgia and the 11th in American history.

Warnock and fellow Democratic challenger Jon Ossoff were quick to tie their success together talking often of a "new Georgia" as they concentrate efforts around Atlanta and the state’s mid-size cities.

Ossoff was ahead of Sen. David Perdue by more than 18,000 votes to become the current Senate’s youngest member, at 33. Both The Associated Press and FOX News projected Ossoff's win. With the number of votes between the two candidates small enough, officials expect the Perdue campaign to request a recount.

There have been several younger senators throughout history, notably the president-elect. Biden was 30, the minimum age under the Constitution, when he joined the Senate from Delaware in 1973.

Warnock will become the first Black senator from Georgia and the 11th in American history.

The win now swings the balance of power in the U.S. Senate towards the Democrats with Vice President-elect Kamala Harris now expected to be a tie-breaking vote once she is sworn into office on Jan. 20.

This election might be studied by each party and scholars for years to determine where the crux of the state’s change in color ordinates. Was it voter apathy among GOP faithful? Did supporters of President Donald Trump stay home? How much did former Democratic gubernatorial candidate Stacey Abrams’ efforts to register new voters come into play?

Democrats point to decades of organizing work, especially leading up to and since Stacey Abrams’ near-miss in the 2018 governor’s race, to push back on the idea that Biden’s Georgia victory was simply a backlash against Trump.

"It’s not the work of a single moment," said Jen O’Malley Dillon, Biden’s campaign manager, crediting Abrams and others with capitalizing on Georgia’s growth and diversity. O’Malley Dillon added that flipping a Republican stronghold like Georgia helps solidify new and once-sporadic voters because they’ve seen a tangible victory. Now, she said, "People feel like they have a voice as part of this party."

Still, even with Biden’s win, Democrats failed in November to make gains in the Georgia General Assembly. "This is still a center-right state," insisted Michael McNeely, a former state GOP executive.

While Warnock and Ossoff tied themselves to each other, Perdue and Loeffler tethered themselves to Trump, ever the turnout driver, every step of the campaign.
The senators even indulged the president claiming Biden won through fraud that Trump’s attorney general and numerous federal courts said didn’t happen. When audio of a recent telephone call revealed Trump demanding that Georgia’s secretary of state, a Republican, "find" enough votes to overturn Biden’s victory, Perdue didn’t criticize Trump. He instead called it "disgusting" that someone recorded and leaked the call. The senators have remained mum as Trump repeatedly blasted Gov. Brian Kemp, who appointed Loeffler, for not stepping in.

But anger has always helped Trump juice Republican turnout. In November, he got 385,000 more votes in Georgia than he did in 2016. But he’s also a powerful motivator for Democrats: Biden got 600,000 more votes than Hillary Clinton in 2016, enough to win by 12,000 votes out of 5 million cast.

Republicans were worried the president’s grievance tour of the last two months could depress turnout among Trump hardliners -- those most likely to believe his assertions of a rigged process -- while also repelling some traditional Republicans and GOP-leaning independents, especially in Atlanta suburbs that can be decisive in statewide races.

"If Kelly and David don’t end up winning," said Chip Lake, a longtime Georgia GOP operative, "it’s going to be hard for a reasonable person not to come to a conclusion that all the chaos cost them the race."

Georgia’s evolution from Democrats’ "Solid South" to one-party GOP domination and now to two-party battleground isn’t as much about changing minds as it is population growth and generational shifts. Metro Atlanta’s core now accounts for more than 40 percent of the state’s 10.7 million residents. The extended metro area accounts for more than half. The state gets less white every year, with whites under 18 already a plurality, not a majority, in that age group.

The rhetoric, and the candidates themselves, illustrate the longstanding urban-rural split in American politics that has hardened in the Trump era.

Due to the the tight margins of both races, election officials expect at least one of the campaigns to request a recount. Under Georgia law a candidate can request a recount if the margin is less than or equal to 0.5%. That request has to be made within two business days of the results being certified.