A driver who allegedly caused a deadly wrong-way crash on Interstate 10 in Chandler two months ago has been arrested, according to authorities.

CHANDLER, Ariz. - A driver who allegedly caused a deadly wrong-way crash on Interstate 10 in Chandler two months ago has been arrested, according to authorities.

Arizona Department of Public Safety officials said 25-year-old Hannah Dike of Phoenix "was released from a medical rehabilitation facility and booked into the Maricopa County Jail on one count of reckless manslaughter."

Dike had to be pulled from her vehicle and DPS troopers reported smelling alcohol on her breath and requested the blood test from the hospital.

According to court paperwork, Dike’s blood-alcohol level was .275%, which is 3.4 times the legal limit for drivers in Arizona. 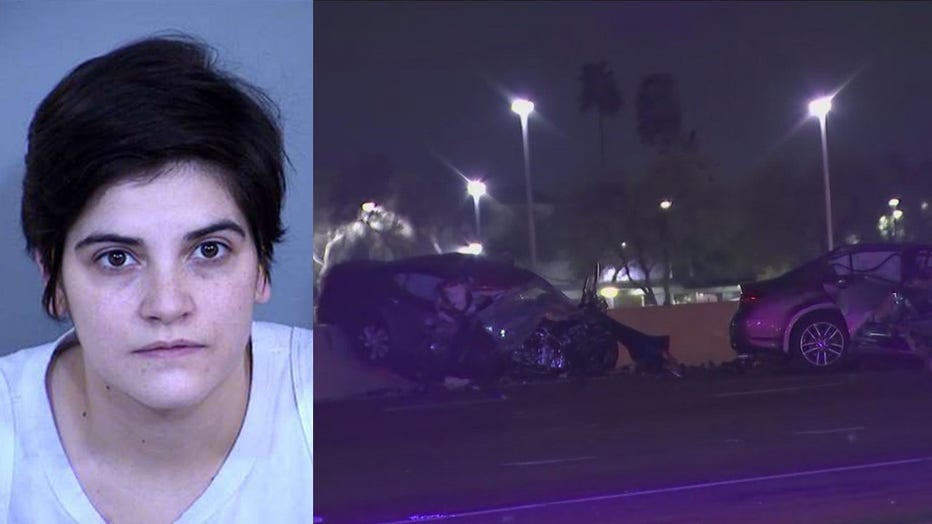 It was unclear Sunday if Dike had a lawyer yet who could speak on her behalf about the case.

DPS officials said Dike was injured in the Feb. 10 crash and was in a medical rehabilitation facility for weeks.

According to the Arizona Department of Public Safety, the crash happened just after midnight when a vehicle that was traveling eastbound in the westbound lanes crashed head-on into another vehicle near Chandler Boulevard.

They said 31-year-old Bobby Kramer was in the car that was struck on the freeway and he died at the scene.

Kramer was a Navy veteran who worked as the food and beverage director at two restaurants in downtown Chandler.

Victim was a beloved Valley bartender

Man killed in I-10 wrong-way crash was a veteran, popular bartender

Bobby Kramer was known as a top mixologist and was a bartender at the Brickyard in Chandler.&nbsp;

Robert "Bobby" Kramer was the food and beverage director for the Brickyard Downtown and the Hidden House in Chandler. He was also known as a top mixologist. If you ever had a night out in downtown Chandler, he most likely fixed you a handcrafted cocktail.

Bobby was also an eight-year Navy veteran who served in Operation Enduring Freedom.

His loved ones are devastated over the loss of a good friend.

"I think that was his biggest talent to be honest, his charm, and charism, and just paying attention to the details of what people wanted," said Jonathan Buford, owner of Arizona Wilderness Brewing Company. "You could walk into the Brickyard on a Tuesday and he'd remember you and your drink. We just lost a big part of our community. I'll miss it forever, and I know that people who went to the Brickyard and who knew Bobby are going to have that hole in their heart."

Justin Evans, owner of the Sleepy Whale, said Bobby was a staple in the community.

"He was an anchor in our community in the food and beverage industry," said Evans. "I think the thing a lot of us think about right now is just his son, Arthur, and his wife not having Bobby home."

Buford and many others joined together to support his family. A fundraiser raised close to $120,000.

Buford also created the Human Kindness Brew in his memory.

During the early morning hours of April 26, police say a shooting took place near 92nd Drive and Hazelwood.

Maricopa Police Department spokesman Hal Koozer said Kevin Johnson was arrested and identified as the owner of the finger found on his neighbor’s driveway.

Officers responded to the area on a shooting call and found 20-year-old Gloria Zermeno lying on the ground in a parking lot with a gunshot wound.