With the State of Arizona's budget surplus standing at over $5 billion, the battle over how those dollars should be spent is gearing up at the State Capitol. FOX 10's Linda Williams reports.

PHOENIX - The State of Arizona's budget surplus currently stands at over $5 billion, and the battle over how those dollars should be spent is gearing up at the State Capitol, with teachers at the front and center of the battle.

On May 31, members of the Arizona Education Association gathered at the State Capitol for protests and meetings. Members of the teachers' union gathering say they want to be a big part of the budget equation.

"Educators are leaving the state in droves for a reason," said AEA Acting President Marisol Garcia.

"I made the heartbreaking decision to resign from education this year," said Mary Gilmore.

Gilmore, who teaches kindergarten, said she is leaving for a higher paying job after nine years. 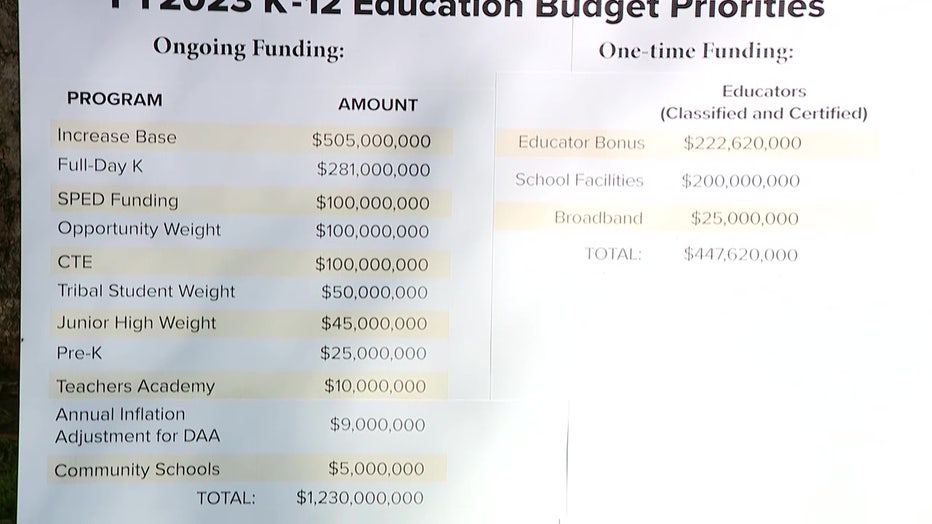 AEA officials have showcased a list of budget priorities that total over $1 billion, the largest allocation of which would be for teacher pay. In response, Republican State Representative John Kavanagh says there will be money for schools this year.

"We will be making a significant investment in education, as we have been for the past five or six years, and we're not limiting the money just to district schools. Charter schools and private schools will be getting money, because it's all about education," said State Rep. Kavanaugh.