EL MIRAGE, Ariz. - Officials with the El Mirage Police Department say they have arrested three people in connection with a shooting earlier in the month.

The shooting, according to a Facebook post by El Mirage Police on Dec. 22, happened at a residential neighborhood near Dysart and Cactus Roads. When officers arrived, they found a home, which was occupied by a mother and her young daughter, struck by a bullet.

We obtained photos taken at the home following the shooting, which shows a window damaged by a bullet.

According to police, the victim was very close from the gunshot, and crawled to a safe space with her daughter to call 911. Police investigators later found three spent 9mm shell casings in a cul-de-sac.

Rich Garza, who lives in the area where the shooting on Dec. 9 happened, remembers hearing gunshots.

"I was in my backyard, and I hear this pop, pop, pop, and it was in the distance, and I know gunfire. I'm ex-military," said Garza. "I thought maybe that's not a big deal. About a half hour later, I came inside, and I heard shots at the end of the block."

"Let's say 20 to 30 minutes later, police end up knocking at my door," said Garza. "They say, 'we see your surveillance cameras. Did you capture that on video? I said yes I did."

The surveillance video shows a 1997 silver Honda Accord drive down a street. The car quickly pulls over at the end of the cul-de-sac, and investigators say the suspects fired three shots before the car sped off. 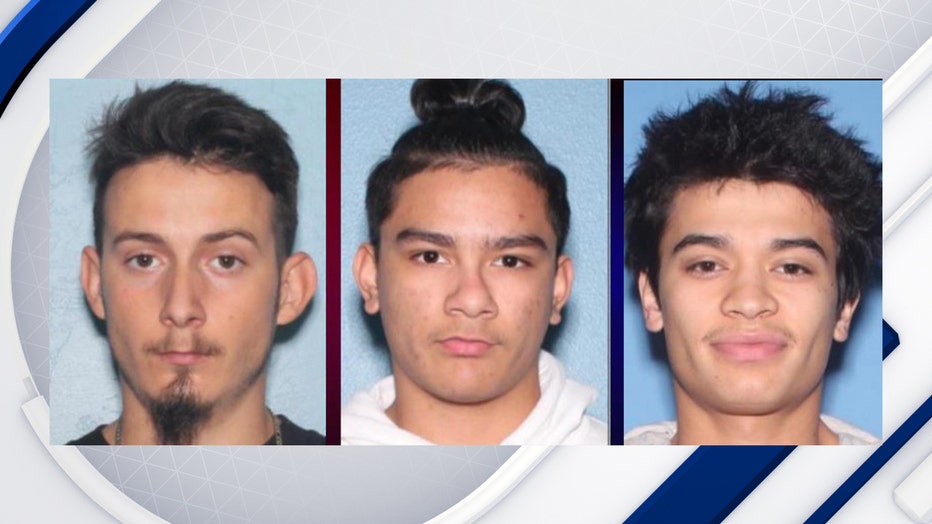 The car, according to investigators, was found on Dec. 11, and on Dec. 21 and 22, two search warrants were served at homes in El Mirage, which led to the arrest of the three suspects. They were identified as:

"In addition to the arrests, seven handguns were seized during the investigation," read a portion of the statement.

According to police, Macaulay was the driver, and Quiroz admitted to being the shooter. Carrillo reportedly also possessed a handgun.

The three suspects, according to investigators, are linked to six other shootings within El Mirage. According to court documents, Macaulay told detectives the three men planned the cul-de-sac shooting on Dec. 9, having decided to ‘pop off,' a slang for firing guns.

The three have been booked into Maricopa County Jail, and all three are accused of a variety of offenses, including aggravated assault with a firearm, discharging a gun at a residence, criminal damage, and conspiracy to commit the aforementioned offenses.

The victim in the shooting, meanwhile, did not want to go on camera, but did tell us that she is still shaken up two weeks after the incident, but is relieved the suspects are off the streets.