The driver accused of causing the crash, 19-year-old Jose Sanchez, was hospitalized with non-life-threatening injuries.

The crime happened on March 24, 2022, after two people reportedly stopped to get a drink at a convenience store near El Mirage and Thunderbird roads.

The deadly shooting happened at a T-Bird Mini Mart near 126th Avenue and Thunderbird Road back in March. 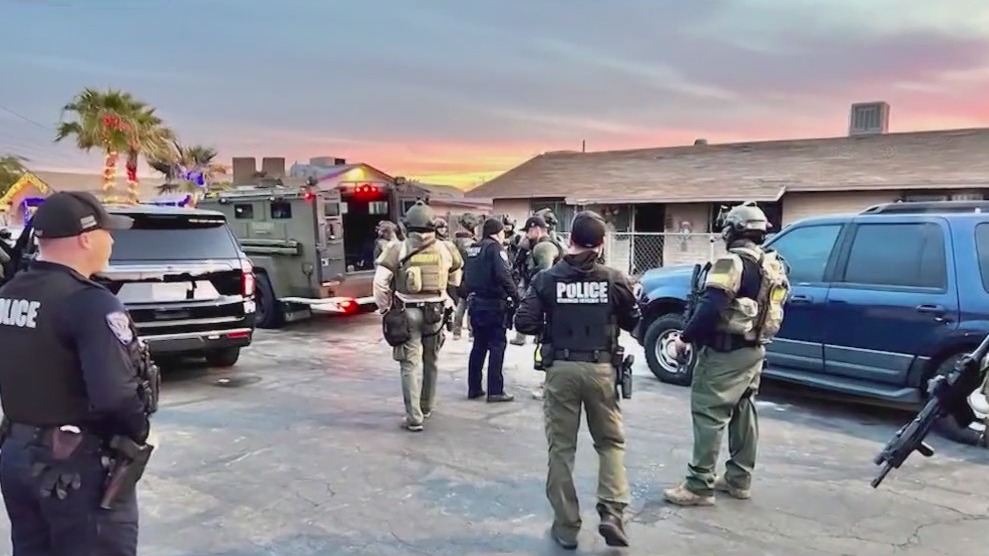 Nearly two dozens suspect who allegedly controlled a large drug trade operation in El Mirage have been arrested. Police say search warrants were served at four homes near the U.S. 60 and Thompson Ranch Road. Over 400 fentanyl pills and several hundred grams of methamphetamine were found. The suspects are accused of a slew of drug charges, including the sale of dangerous drugs.

El Mirage Police investigators are looking into a stabbing that left a man dead.

Police in El Mirage says they have arrested a woman in connection with a human smuggling operation that held and/or processed 80 to 100 undocumented immigrants a month.

Police in El Mirage have released the identities of two people who were arrested for allegedly trying to enter a school building after it went into lockdown on August 12.

Our top crime stories for the week of Aug. 8: an illegal marijuana dispensary in south Phoenix; a Glendale woman stabbing her boyfriend to death; a lockdown at an El Mirage elementary school; a carjacking at a Peoria Target; and the sexual assault of a boy in Chandler.

El Mirage Police say Adrian Ballesteros and his girlfriend were arguing in a pickup truck when he pulled on the steering wheel, causing her to lose control of the vehicle.

“Officers learned the babysitter's attention was diverted, and she went to another part of the home,” police said. “When the babysitter returned to the children, the one-year-old was underwater.”

A search is underway for a suspect who officials with MCSO say rammed a deputy's patrol car in the West Valley.

An El Mirage man has been arrested in connection with a number of domestic violence-related incidents that escalated to an alleged act of arson, according to police in the west Valley city. A GoFundMe has been set up to help the family.

Police say they visited a home near Cactus Road and Dysart on Feb. 4. When they arrived, they found three bodies inside. On Feb. 10, investigators say two of the victims were shot by their father.

No students were injured in either robbery and police said it’s unclear how much money was taken from the students.

Parks and Sons, El Mirage's sanitation provider, is no longer making their recycling facility available for use. Authorities did not disclose specific reasons for the change.

Saul Ballardo, of El Mirage, faces dozens of charges for at least five different incidents after he allegedly shot at police officers and deputies, although none were hurt during any of the shootings.

Police say they received multiple calls about shots fired near El Mirage Road and Thunderbird at around 8:30 p.m. on Dec. 31.

Police in El Mirage say three people who have been arrested in connection with the shooting of a home in early December have been linked to six other shootings within the West Valley city.

Law enforcement officers came too close for comfort to gunfire -- and this happened just a short distance from where shots were fired the night before.