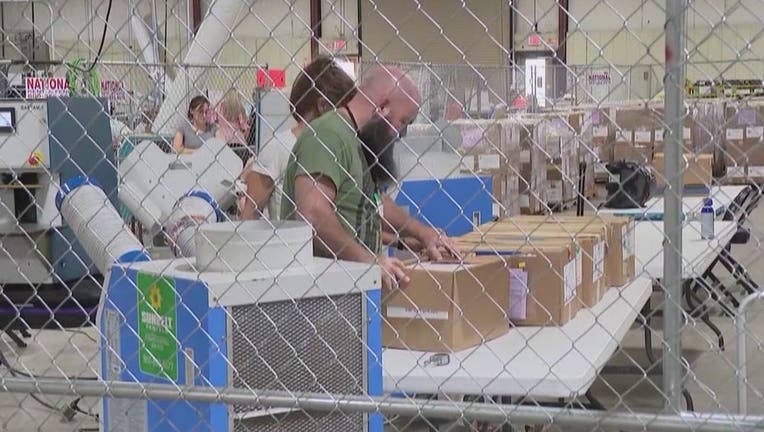 (AP) - Presenting its findings in a six-month-long review of the 2020 presidential election in Arizona’s largest county on Friday, a Republican-backed cybersecurity firm ended in much the same place where it began: without any evidence to contradict certified election results showing Joe Biden won.

Still, the Cyber Ninjas firm, which had never audited an election before, spread numerous falsehoods that ignored the basic facts of how elections work in Maricopa County, including unfounded claims about duplicate ballots, missing files and illegitimate votes.

Over the weekend, bits of the firm’s findings — including from various drafts of its report — proliferated on social media, driving a surge in false posts suggesting the election results were flawed. Biden won Maricopa County by about 45,000 votes, key to his 10,500-vote win of Arizona.

Here’s a closer look at some of the claims.

More than 57,000 ballots cast in Maricopa County had serious issues and should have been disqualified.

That’s not true. The number is calculated from a laundry list of misleading and debunked claims in a draft version of the report.

Claims that there were 57,734 ballots with "serious issues," that were "illegal" or that "should’ve been disqualified" are citing the sum of what a draft of the report called "Ballots Impacted." The draft itself noted, "In many cases there could be legitimate and legal votes within the Ballots Impact amount."

In fact, the three largest components of the total — all of the purported ballot issues billed as being either "critical" or "high" severity — are flawed.

One of the "critical" figures included in the total is 23,344 mail-in ballots cast by people who allegedly moved before ballots were sent out. But that number is based on a commercial database unrelated to elections, and it doesn’t mean something improper happened. Election officials explained many voters move to temporary locations while still legally voting at their registered address.

Another claim rolled into the total is that 9,041 voters were recorded as receiving one mail-in ballot, but returning two. However, Maricopa County said on Twitter that this occurs when a voter returns a ballot with a signature discrepancy — such as a blank or mismatched signature — and election officials contact the voter to resolve the issue. A second record is then created in the system. In those cases, of course, only one ballot is counted per voter.

The draft report also included the flawed claim that there were 10,342 voters who voted in multiple counties.

This claim from a draft version of Cyber Ninjas’ report is false. The number is a tally of votes from people who share the same full names and birth years. Experts say such overlap is common in a county where more than two million people cast ballots.

County officials offered an example on Twitter: "If you search for Maria Garcia born in 1980, you’ll get 7 active voters in Maricopa County and 12 statewide. And that’s just one name."

Cyber Ninjas softened its language in the final report, saying it was plausible that the repeated names and birth years could come from "legitimate, separate individual voters."

More than 17,000 duplicate ballots were counted in the 2020 presidential election in Maricopa County.

No, they weren’t. Shiva Ayyadurai, the COVID-19 vaccine skeptic and failed U.S. Senate candidate who made this claim, based his analysis on images of ballot envelopes, not ballots. Contrary to Ayyadurai’s assessment, images of the same ballot envelope often exist but the ballot inside is counted only once.

County election officials say they re-scan images of ballot envelopes anytime a voter submits an envelope with a blank or mismatched signature and it gets resolved. When the county contacts the voter and he or she signs the envelope, a new image of the envelope is captured.

Ayyadurai also pointed out that many duplicate ballot envelope images came in after Election Day. There’s a simple explanation for that: Under Arizona law, there is a period of five business days after an election during which voters can address certain irregularities with their ballots. Maricopa County hired additional staff to contact voters and resolve discrepancies in the final days of voting and in the days after the election.

Social media users seized on a moment in Ayyadurai’s presentation when he said that Maricopa County had failed to list the duplicate ballots in its canvass report. But that report lists how many ballots were cast, counted and rejected, and does not address scanned images of ballot envelopes.

Maricopa County purged the machine records from the 2020 election the day before an outside review of the vote started.

The data never disappeared. While officials moved election data off a server and onto backup drives to prepare for a county-commissioned audit in February, they archived and retained it all, the county confirmed.

Maricopa County denied claims that it had been "CAUGHT" intentionally deleting data in some kind of sinister plot, explaining there is not enough space for the data to remain on the server indefinitely.

"We have backups for all Nov. data & those archives were never subpoenaed," Maricopa County tweeted on Friday.

Associated Press writer Jude Joffe-Block contributed to this report from Phoenix. This is part of AP’s effort to address widely shared misinformation, including work with outside companies and organizations to add factual context to misleading content that is circulating online. Learn more about fact-checking at AP.