How to cope with COVID-19 related stress

PARIS - While most French health care workers are vaccinated against the virus, a small but vocal minority is holding out. With infections exploding, a new law requiring them to get the shots is exposing the divide.

The French government, which has declared that the nation has officially entered its "fourth wave" of the pandemic, pushed the law mandating COVID-19 vaccines for health care workers, to protect hospitals and avoid a new lockdown. Government spokesman Gabriel Attal says the move isn’t meant to stigmatize reluctant health care workers but to limit risks to the vulnerable people they care for.

The law, adopted by parliament early Monday, also sets up a "health pass" for everyone in order to access restaurants and other public venues. Both measures have prompted intense debate and two straight weekends of protests around France. Health care workers in white coats have been among the demonstrators.

Many cite incorrect information about the vaccines circulating on the internet, worry about their long-term effects or want more time to decide. Several health workers said they took issue with the mandate, not the vaccines themselves.

At one Paris protest, some carried signs reading "My body, my choice," and a health worker dressed as the Statue of Liberty called it an "act of violence" to force people to get vaccinated.

Céline Augen, a secretary at a doctor’s office, knows she may lose her job if she refuses to get a shot but protested Saturday anyway.

"I’m here today in favor of the freedom to chose to get vaccinated or not," she said. 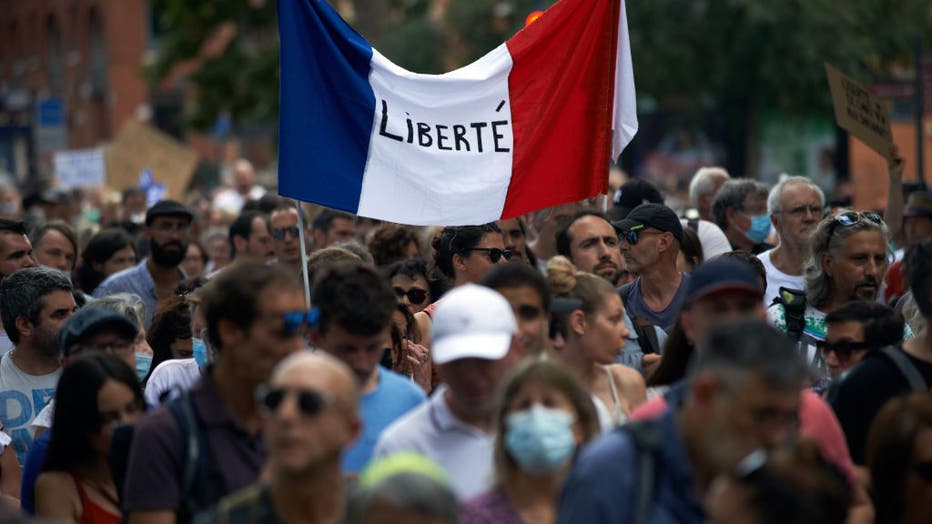 More than 10,000 protesters took to the streets in Toulouse, France, against the near mandatory vaccination for health care workers and against the health pass on July 24, 2021. (Photo by Alain Pitton/NurPhoto via Getty Images)

Solene Manable, a recent nursing school graduate who is working in a Lille hospital, said, "There are many health workers who don’t want to get vaccinated because we don’t know much about the vaccines."

Scientists say that is simply not true anymore. The vaccines used in France — Pfizer, Moderna, AstraZeneca and Johnson & Johnson — were tested in tens of thousands of people around the world, and results of the studies have been shared with the public. More than 2 billion people worldwide have now received coronavirus vaccines, including most French adults, providing a broad overview of vaccines' impact on people's health.

Vaccine hesitancy among some health workers has been an issue in the U.S. and elsewhere, too. But the French mandate is stirring up anger on the political fringes in a country long considered more vaccine-skeptic than its European neighbors.

France has faced medical scandals in recent decades involving vaccines, diet pills and breast implants that have seeded doubts about the medical establishment. Suspicion of big pharmaceutical companies is relatively common, and politicians on both the extreme right and the left are now fueling that skepticism for their own ends.

Retired doctor Bruno de Ligny, who volunteers in vaccination centers in Normandy, stressed that the technology behind the Pfizer and Moderna vaccines widely used in France, while new, has been under research for more than 20 years. He also noted that French health workers must already be vaccinated against hepatitis B – a vaccine not compulsory for the rest of the population — but "no one claimed that was dictatorial when it was implemented."

"These health workers say they want the ‘freedom’ not to be vaccinated," he said. "They do not realize that what they are really asking for is the freedom to kill."

Patrick Pelloux, president of the emergency room doctors’ union Association des Médecins Urgentistes de France, lauded the French government for taking decisive action in the face of rising infections. The country is now seeing about 20,000 new infections a day, up from just a few thousand in early July, and has counted over 111,000 virus-related deaths in the pandemic.

Pelloux said workers in the lowest-skill health care jobs are among the most vaccine-wary, a symptom of what he called an overlooked "class struggle" in public hospitals, where there is little interaction between different levels of medical workers.

Some health workers feel they are being talked down to and are underappreciated in general.

"Our job is to cure people, not to kill them. We have an ethical ... and civic duty to get vaccinated and limit hospital-acquired COVID infections," he said, adding that most of those who died of COVID-19 in France would still be alive today if they had received a vaccine. And health workers have been among those most exposed, and infected.

Some protesters said they would eventually consent to getting the jab if given no choice, but would resent it. Others said they would attempt to buy fake vaccine certificates instead. French police have arrested several people suspected of trafficking fake virus certificates on social media, where the documents can fetch several hundred euros (dollars) each.

Yet a majority of French adults are fully vaccinated and millions more have lined up in the past two weeks. For all the high-profile protests, polls indicate that overall French vaccine hesitancy has ebbed in recent months and that most support the vaccine mandate for health care workers.

Many want the government to go even further: Two recent polls indicated that a majority of the French support a coronavirus vaccine mandate for everyone.